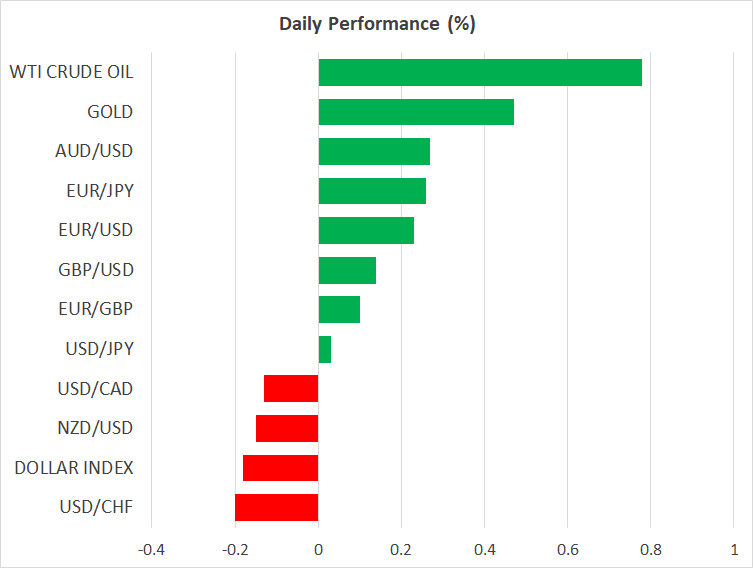 Markets have started the week on a cheery note as news that President Trump has authorized the emergency use of plasma treatment for Covid-19 patents and is considering fast tracking a UK vaccine before the election boosted sentiment. Shares in Asia ended the day in the green, while European and US futures were sharply higher. It follows another record day on Wall Street on Friday, with the S&P 500 and the Nasdaq closing at all-time highs.

Good news continues to eclipse the bad as investors awash with stimulus-infused cash are keen to get their hands on anything that will yield a higher return than government bonds. Expectations that a virus breakthrough by year-end will put an end to the global pandemic is the main driving force behind this unwavering optimism that has taken hold of the markets for the past five months.

However, there’s yet to be any conclusive results from any of the vaccines or treatments that are under development for the coronavirus and many investors have yet to wake up to the prospect that the pandemic could still be around in a year or two.

But the lack of virus-busting medical advances isn’t the only risk looming over markets. The US Congress is no closer to reaching a deal on a new fiscal stimulus package that would keep millions of jobless Americans financially supported. Nor is there any clarity on where the trade talks between Washington and Beijing are headed after a mid-year review of the ‘phase one’ deal due to take place last week was unexpectedly postponed. Trump is in no hurry to patch things up with China. If anything, he’s given his strongest indication yet that he would prefer to ‘decouple’ from China in comments to Fox News over the weekend.

Dollar on steadier footing, looks to Fed for direction

The US dollar eased slightly from last week’s highs but remained supported on Monday as signs that the US recovery isn’t the only one that’s hit a bump in the road weighed on its peers. In fact, America’s rebound may have only hit a very small bump as recent data suggest that while some parts of the economy are slowing, such as the labour market, others, like housing, are booming. Other indicators are also ticking higher, with IHS Markit’s manufacturing and services PMIs surging in August when the country is supposedly in the midst of a second wave.

However, the data will not likely be of much comfort to Fed policymakers who are worried about the economic impact of a possible fiscal cliff and the uncertain path of the virus. The Fed disappointed investors last week after giving little away in the July FOMC minutes about the future direction of monetary policy. But Fed Chairman Jerome Powell will probably use his address on Thursday at the annual Jackson Hole symposium, which will be conducted online this year, to shed some light on the central bank’s review of its monetary policy framework.

There is growing expectation that the Fed will shift to targeting average inflation, which would provide it with more flexibility to let inflation run above target, so any mention of that could sink Treasury yields and the dollar. But until then, the greenback is enjoying a small reprieve.

Euro and pound knocked off their perch

The euro was attempting to claw back some of Friday’s huge losses when it tumbled after the flash August PMIs pointed to a faltering recovery in the Eurozone. The shockingly weak figures pushed the single currency below $1.18, though today, it was trading slightly above that level.

The pound was also struggling, plunging from a high of $1.3255 to a low of $1.3057 on Friday, after the latest round of Brexit talks ended once again with no progress. EU’s top negotiator, Michel Barnier, told reporters “an agreement looked unlikely”. But there was some support for the pound from a double dose of strong data after both the latest retail sales and PMI numbers beat expectations on Friday.

But both currencies have since stabilized, suggesting investors see this setback as a short-term one, and it was the New Zealand dollar that underperformed among the majors on Monday. The kiwi has been trending lower throughout August on speculation that the RBNZ will cut rates to negative in the coming months. A plunge in second quarter retail sales in New Zealand today and news that the government has extended the country’s lockdown following the recent spike in virus cases reinforced those expectations.