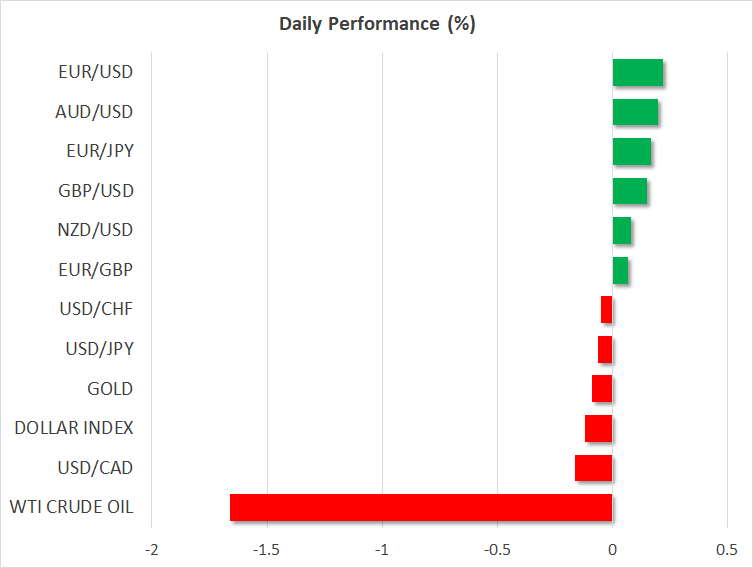 Virus fears keep Wall Street on the back foot

Worries that the world could be in the midst of a second Covid-19 outbreak continued to weigh heavily on market sentiment as the second quarter almost draws to a close. Stocks in Asia were down by more than 1% on Monday, following Wall Street lower after Friday’s strong sell-off.

US equities have been unable to regain their bullish posture after the market wobble earlier in June as investors have been forced to reassess their expectations of V-shaped recovery. There have been growing signs that fears of a major second wave are materialising after mini outbreaks in China, Japan, Germany and Australia. But while those appear to be mostly contained, the biggest threat to hopes of a quick and full recovery is the alarming spike in new virus cases in the United States.

The US reported a third straight day of a record increase in new coronavirus cases on Friday, prompting officials in the worst-hit states such as Texas and Florida to roll back on their reopening plans by re-imposing some restrictions like closing bars.

The fast-emerging risk of entire regions or states being placed under lockdown again to contain new hotspots appears to be giving rise to talk of an ‘uneven’ recovery – a dramatic turnaround from just a few weeks ago when a V-shaped recovery seemed like a sure bet.

No panic yet, safe havens retreat

However, there is no panic yet as US stock futures stabilized at the start of European trading and safe havens reversed lower. Investors seem content for now in consolidating their gains rather than embarking on a selling spree, suggesting they expect policymakers to ramp up their stimulus programs should the economic recovery falter. Some positive vaccine news over the weekend and today is also supporting risk assets.

The safe haven yen and US dollar pulled back from earlier modest gains, while gold was just trading in negative territory.

But the calmer mood may not necessarily hold over the next 24-48 hours as quarter-end rebalancing could generate some volatility. With overvalued US stocks most at risk of portfolio rebalancing, the euro could be a major beneficiary if funds are diverted to European equities than into bonds.

The euro was last trading 0.25% higher, holding comfortably above the $1.12 level and outperforming other majors. The Australian dollar was not far behind, while the greenback was slightly down on the day against a basket of currencies.

Pound inches higher as new round of Brexit talks get underway

The pound also advanced against the dollar on Monday but stayed within range of Friday’s one-month low of $1.2312. Negotiations between the United Kingdom and the European Union for a post-Brexit trade deal will enter a critical phase this week, with the two sides intensifying their efforts to break the deadlock over key issues.

It is hoped that the resumption of face-to-face talks will help negotiators to bridge their differences, though whether it will be possible for any substantial progress to be made remains to be seen. Nevertheless, the following few weeks could be a volatile period for cable and euro/pound as the currency is likely to overreact to any Brexit-related headlines or rumours.