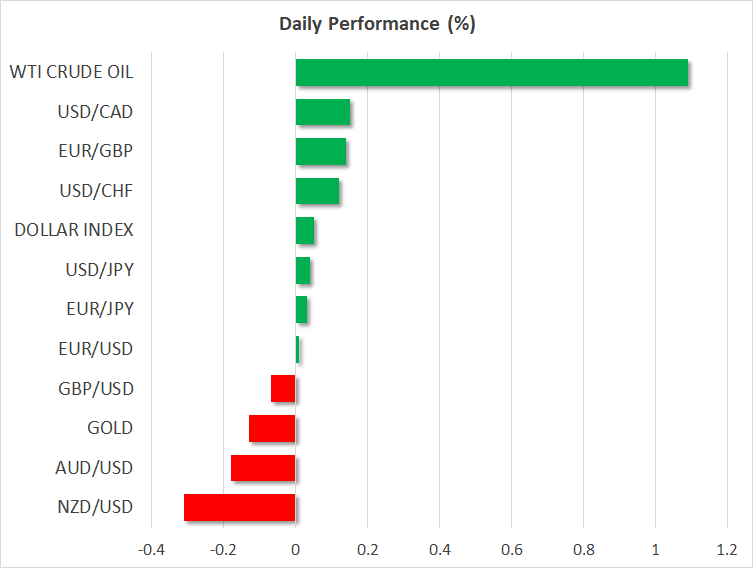 A mild risk-off tone swept through global markets on Tuesday, with American stocks closing modestly in the red and the defensive Japanese yen outperforming most of its major peers. Likewise, gold prices logged some gains, as the commodity currencies – the aussie, loonie, and kiwi – retreated, the latter falling to a fresh 4-year low earlier today.

The main catalyst behind these moves was probably a recession signal from the US bond market, where the 2s10s yield curve inverted further, indicating mounting fears among investors that a downturn may be on the menu in the coming years. Lingering worries that trade tensions may escalate again as soon as next week likely contributed too. On the bright side, US consumer confidence remained very high in August, signifying that consumption remains resilient despite the ‘trade blues’, and hence that any recession is still far away.

Sentiment has stabilized somewhat today, with most currencies trading in tight ranges and US equity futures pointing to a flat open in Wall Street, but this seems merely like the calm before the next ‘risk-off storm’. The trade war is going from bad to worse at a dramatic pace, and judging by the latest comments from Beijing, it may be only a matter of time before China retaliates to Trump’s latest escalation. Against this backdrop, the outlook for the yen remains bright, while the prospects for the aussie and the kiwi look bleak.

The British pound outperformed yesterday, as the risk of a chaotic Brexit in October moderated somewhat. Opposition parties met to formulate a plan for stopping a no-deal exit and concluded that they will attempt to pass a law blocking such a move, forcing PM Johnson to ask the EU for a Brexit delay. Separately, reports that London is drawing up plans for a mechanism to replace the controversial Irish backstop may have rekindled hopes that a deal is still possible.

Alas, Ireland’s foreign minister cast doubt on any alternative solution, saying that the measures discussed so far ‘do not come close’ to achieving what the backstop does. He added that it’s possible no solution exists.

While a lot will depend on what Johnson ultimately proposes, it’s difficult to envision London coming up with an ‘out of the box’ idea that hasn’t been floated by the previous administration, and that would be acceptable to Brussels. Therefore, the outlook for the pound still seems dark, as a deal remains unlikely. If the opposition manages to pass a law forcing Johnson to ask for a delay, that could trigger a meaningful rebound, but it wouldn’t be a game-changer.

Crude oil prices surged yesterday, after the weekly private API inventory data showed a massive drawdown in US stockpiles. The decline shows that oil consumption remains solid, allaying some worries that the escalating trade conflict would dent demand. The official EIA inventory figures will be released today at 14:30 GMT.

Despite this rebound, however, the broader outlook for crude seems negative. Even if demand remains robust for now, that may not be the case for very long, considering how rapidly trade tensions have escalated and how much the global manufacturing sector is struggling.