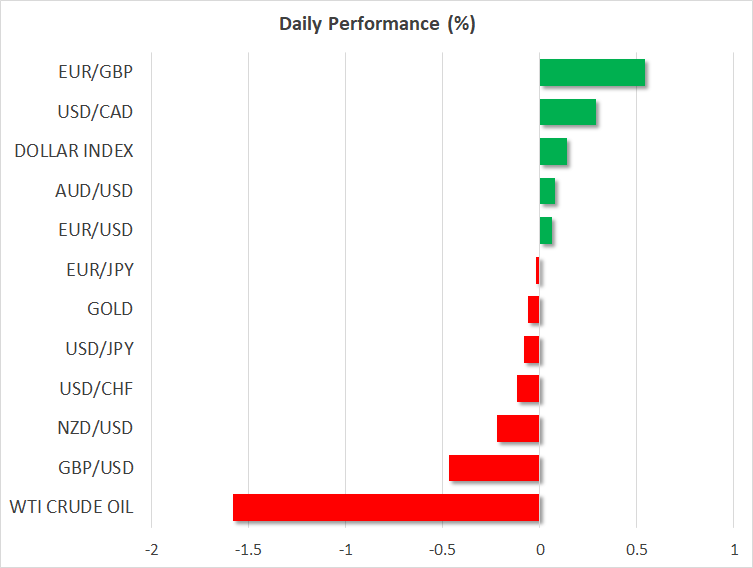 The gains come despite the worst rout in tech shares in at least three months amid some speculation that the exorbitant valuations in the sector are behind the sudden change of fortunes in Wall Street’s tech darlings. But today’s moves may merely be down to markets taking a breather during thin trading volumes while the US is shut for Labor Day celebrations.

In fact, S&P 500 and Nasdaq futures indicate the selloff is far from over, with both holding in negative territory. Tech losses also weighed on China’s and Hong Kong’s stock markets but for different reasons. Reports that Chinese semiconductor manufacturer, SMIC, could be the next victim of the Trump administration’s protectionist actions raised fresh fears about the steady but endless deterioration in relations between China and the United States.

Currency markets also cast doubt on the positive mood in equities as the US dollar inched higher against most of its major rivals. A stronger greenback may be one factor lifting European shares on Monday as the euro struggled to regain a positive footing, trading flat on the day, while the pound slipped on renewed Brexit jitters.

The commodity dollars also lost ground against their US counterpart, with the latest slide in oil prices weighing on the loonie in particular.

Aside from the wobble in tech stocks, signs that the US jobs recovery may be slowing is also driving up safe-haven demand for the dollar. America’s jobless rate unexpectedly dipped to 8.4% in August’s payrolls report, beating all estimates. But the jobs gains were mainly led by a temporary hiring by the government, hence, going forward, it’s hard to see the unemployment rate falling below 8% without any additional fiscal support.

So far, markets have shown little panic to Congress’ failure to reach a deal on a new virus relief bill but that could change if consumption begins to dwindle in the coming months. However, there is hope that once lawmakers return from their summer recess later this week, there will be a renewed effort to reach a deal, with Senate Republicans reportedly pushing for a “skinny” relief bill.

The pound extended its losses on Monday, slipping below the $1.32 level, as British prime minister, Boris Johnson, set a deadline of October 15 for the UK and the EU to strike a post-Brexit trade agreement.

But just as Johnson added urgency to the talks, doubts grew about whether a deal is possible as the UK stood firm on its red lines and risked angering the EU by planning to override some aspects of the Withdrawal Agreement.

An attempt to backtrack on some of the terms of the divorce, particularly those relating to Northern Ireland, is seen as a dangerous game by Johnson to pressure EU leaders to give in to UK demands as time fast runs out to negotiate a substantive deal.

Negotiators from both sides will start a fresh round of talks this week and this will likely mark the start of a volatile period ahead for the pound as Brexit headlines begin to dominate again. For now though, investors are nervous but not yet pricing in a no-deal outcome, as reflected by the scale of sterling’s declines today.