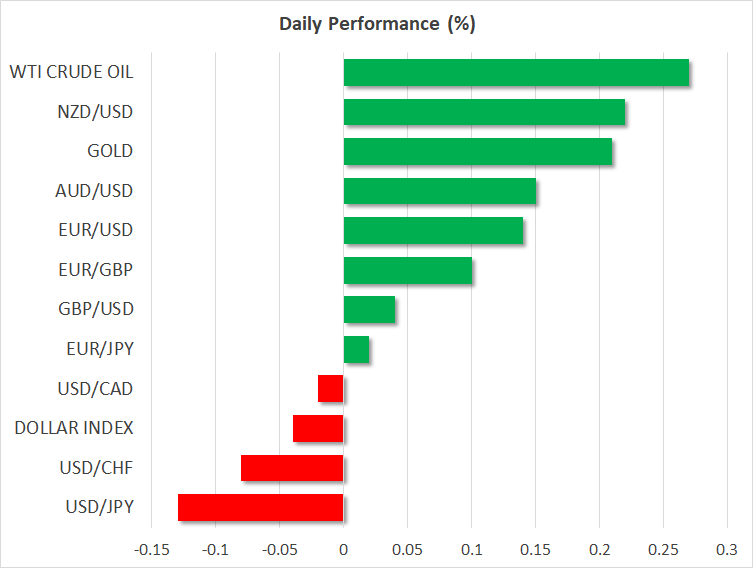 Market sentiment turned sour again on Friday as trade tensions resurfaced after Bloomberg reported that the United States is delaying a decision on whether to allow some American companies to do business with China’s Huawei Technologies. President Trump had agreed to ease some restrictions on the Chinese telecom giant as part of a truce negotiated at the G20 summit with China’s President Xi.

The move is in response to China’s announcement on Tuesday that it is halting all US agricultural imports in retaliation to Trump’s decision to impose 10% tariffs on an additional $300 billion worth of Chinese imports.

The latest headlines reminded investors that trade tensions are here to stay, leading to a reversal of yesterday’s risk-on flows when markets were lifted from better-than-expected Chinese trade figures and a steadier yuan.

Safe-haven favourites such as the yen and gold headed higher, with the US dollar slipping back below 106 yen, though it fell only marginally versus a more muted Swiss franc at 0.9741. The Japanese currency also got a possible boost from upbeat Q2 GDP numbers out of Japan, which eased the urgency for the Bank of Japan to provide emergency stimulus. Gold, meanwhile, moved back towards Wednesday’s 6-year peak of $1510 an ounce.

Stocks in China floundered, as apart from the Huawei report, sentiment was dampened from a bigger-than-expected drop in Chinese producer prices in July, which further amplified growth worries. China’s main indices skidded by close to 1%, but Japan’s Nikkei 225 index managed to stay in positive territory, getting a boost from the S&P 500’s 1.9% surge overnight.

However, equity futures for European and US indices have turned negative, suggesting a mostly risk-off day.

An autumn of elections looms in Europe

The euro and the pound were surprisingly steady on Friday in the face of possible fresh political upheaval in Italy and the United Kingdom. Italy’s deputy prime minister and leader of the League party, Matteo Salvini, called for a snap election on Thursday as tensions rise with the party’s coalition partners, the Five Star Movement.

A government made up entirely of the League party could exacerbate Italy’s increasingly confrontational relationship with the EU. However, it’s unclear if or how soon the government would collapse and that is one reason why traders may not yet be reacting to the news, keeping the euro within its recent range around the $1.12 level.

The pound also saw limited response to reports that Prime Minister Boris Johnson could set a date of November 1 – one day after Britain is due to leave the EU – to hold a general election if, as expected, the opposition Labour party calls a vote of no confidence in the government as soon as Parliament returns from the summer recess at the start of September.

If a fresh election is called in the UK in the coming weeks, it’s unlikely to take the markets by surprise and the outcome may not even matter if Johnson is able to stay in power until after October 31 to force through a no-deal Brexit.

The immediate focus for the pound though, will be second quarter GDP estimates due out of the UK at 08:30 GMT. The other big releases today will be US producer prices and Canadian employment numbers at 12:30 GMT. 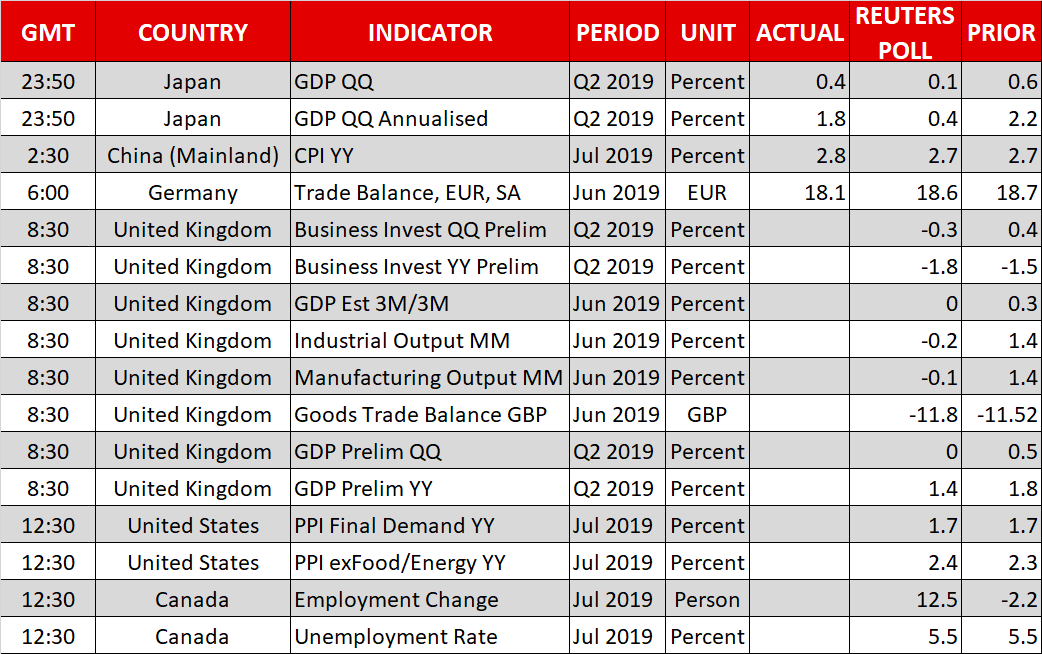