Deluge of US data unlikely to excite dollar, but risk tones might – Forex News Preview

Posted on May 27, 2020 at 9:29 am GMTMarios Hadjikyriacos, XM Investment Research Desk

In America, there’s a flood of data coming up towards the end of the week. Durable goods orders and the weekly jobless claims are due at 12:30 GMT on Thursday, while Friday brings consumption and income numbers ahead of a speech by Fed chief Powell (15:00 GMT). For the dollar though, none of these is likely to have much of an impact. Instead, the reserve currency may be driven mainly by how risk sentiment evolves. Overall, it’s difficult to envision any material weakness in the dollar, and if anything, the short-term outlook seems cautiously positive.

Avalanche of data, but does it matter?

The list of dire American data will likely grow bigger this week. On Thursday, durable goods for April – a proxy for business investment – are expected to have fallen by a staggering 18.5%, following another 15.3% decline back in March, most of which likely reflects an utter collapse in airplane orders.

Meanwhile, the second estimate of GDP for Q1 is expected to be confirmed at a -4.8% annualized rate, while the number of people filing for unemployment benefits for the first time is seen at 2.1 million, a slowdown from recent weeks but still a disturbing number. If confirmed, this would bring the total number of job losses in the last ten weeks to roughly 41 million, or about one quarter of the whole US labor force.

The fun doesn’t stop there, as Friday brings personal income and spending stats for April, with the former projected to contract by 6.5% and the latter by 12.5% from the previous month. Meanwhile, we’ve heard from Fed Chairman Powell many times lately, so he’s unlikely to say anything particularly new.

Admittedly though, the question is whether any of these will matter for markets. We’ve seen an abundance of terrifying data recently, but none of it has really scared investors. The story here is that traders already know we are in a deep recession and are thus taking the numbers in their stride, as most of the carnage has been well signalled in advance.

So what will matter?

In reality, the biggest driver for the dollar has been risk appetite. The reserve currency has been acting as a safe haven throughout this crisis, so it has managed to remain stubbornly strong, despite the Fed’s powerful efforts to weaken it. 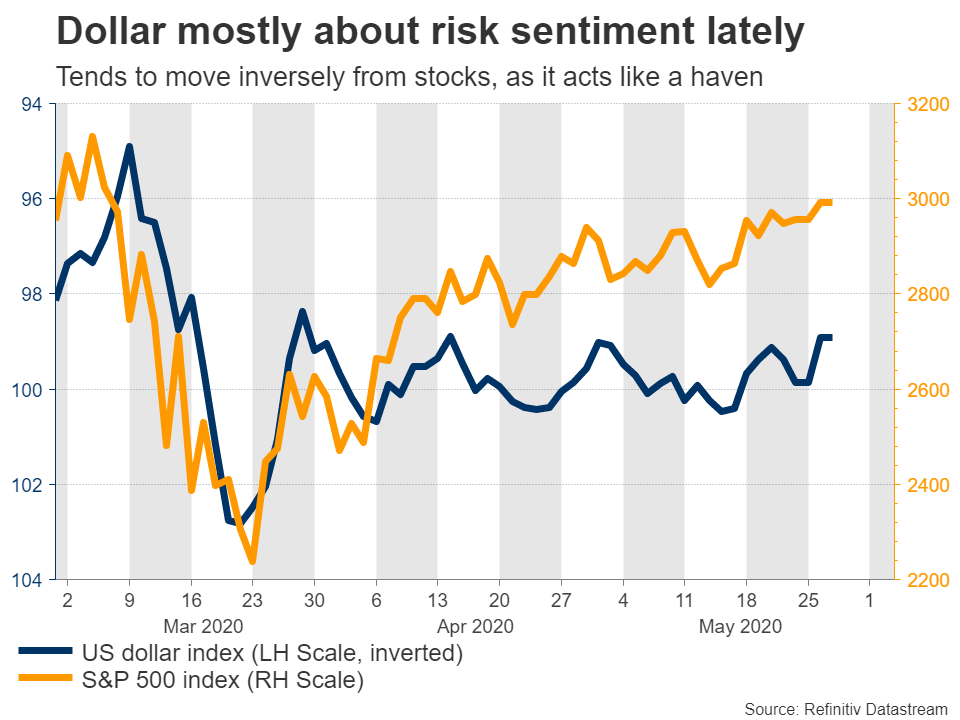 From this lens, it’s quite difficult to envision any material near-term weakness in the dollar, as there’s still a high risk of a pullback in risk appetite and stocks. At current levels, stocks imply that this recession will have very few long-term consequences, which is probably much too optimistic.

Firstly, while some lost jobs may come back quickly in sectors like hospitality, many others will be lost permanently, for example in retail. The same goes for businesses. There’s still a huge risk of a wave of bankruptcies, while many surviving ones will suffer capacity constraints due to social distancing rules staying in place after the lockdowns end. And some segments of the population, like the elderly, may be even more defensive with their spending habits.

The point is that the stock market doesn’t seem to appreciate the long-term scars this crisis could leave, and that’s even before considering the risk of second waves of infection or the rapidly escalating US-China tensions.

The greenback is thus unlikely to fall substantially anytime soon with all these risks on the horizon, and if anything, it may even gain if any materialize or intensify. On the downside, the two key threats for the dollar are a virus vaccine being developed or the EU reaching a debt-sharing deal that boosts the euro, though both seem unlikely for now.

The technical picture is worth monitoring too, as a break of the recent range in euro/dollar between 1.10 and 1.0725 could signal the next directional wave. If the bulls manage to close above 1.10, their next target may be the 1.1040 region. For the bears, a move back below 1.0950 could initially open the door for the 1.0915 zone.