ECB meeting: Is ‘Super Mario’ coming with a bazooka or a toy gun? – Forex News Preview

The highly anticipated European Central Bank (ECB) meeting concludes on Thursday at 11:45 GMT, and a press conference by President Mario Draghi will follow at 12:30 GMT. Policymakers are almost certain to deliver a blend of measures, such as a rate cut combined with another dose of QE. Therefore, the question facing markets is how big this stimulus package will be. It’s a close call, but the risks seem tilted towards a larger-than-expected rate cut, which may weigh on the euro – at least initially.

The euro area is in a tough spot, as an escalating US-China trade war and deepening fears for a chaotic Brexit have hit exports and investment, threatening to sink the bloc’s largest economy – Germany – into a technical recession.

Even if the Eurozone avoids a downturn, growth will certainly be anemic this year, as the rest of the ‘big four’ economies – France, Italy, and Spain – are not doing well either. The story is similar, with the manufacturing sector suffering, which in turn threatens to infect the much larger services sector.

Stimulus, but how much?

Given the deteriorating outlook, Draghi quickly signaled the ECB’s readiness to add more stimulus to support the ailing economy, by cutting rates deeper into negative territory and by launching another round of Quantitative Easing (QE). 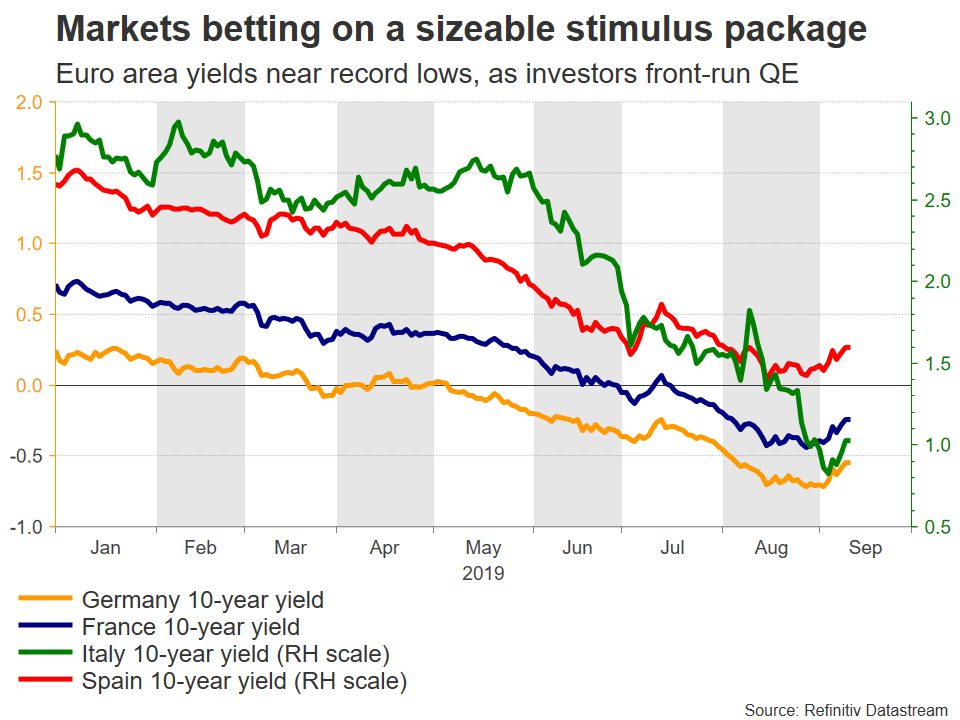 That is precisely the measures markets expect on Thursday – the question is how deep rates will be cut and how many billion will be allocated to QE purchases. Looking at market pricing, 14 basis points (bp) of rate cuts are already priced in, which implies that investors believe a 10bp move is virtually certain, and also assign a 40% probability for a more aggressive 20bp cut.

As for QE, while there is no clear way to gauge exactly how much investors expect, the fact that sovereign bond yields across the Eurozone recently fell to new record lows suggests that traders expect something sizeable, around the neighborhood of EUR 20-30bn per month.

The bloc’s extremely low inflation expectations argue for an aggressive package. Even though euro area borrowing costs have dropped to new lows in anticipation of ECB easing, that has failed to substantially lift market-based inflation expectations. Those remain near record lows, indicating that investors don’t think the stimulus will be enough for the economy to truly recover.

Therefore, conventional wisdom would argue for the ECB to act boldly now, by delivering measures over and above what markets envision to bolster confidence and push inflation expectations higher. 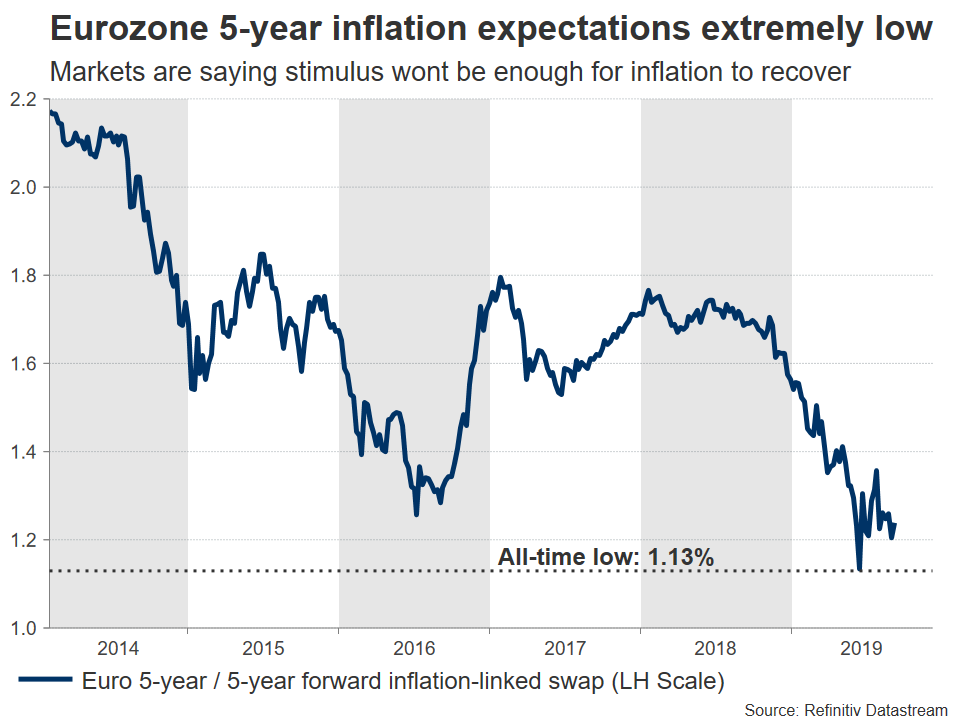 The problem is that some of the more ‘hawkish’ Governing Council members – specifically those representing Germany and the Netherlands – have recently opposed a large stimulus bundle, arguing against restarting QE entirely.

Ultimately, Mario Draghi wants to deliver a bold package. By under-delivering, he would risk tightening financial conditions and a rebound in the euro, both of which could make a bad situation even worse. That said, he will probably face a lot of pushback from the hawks, and since they represent influential countries, that may limit the size of the package – particularly on the QE side.

Bearing all this in mind, the most likely compromise may be for the ECB to deliver a rate cut that is larger than expected – for instance 20bp – but a QE program that is roughly in line with expectations. The hawks seem much more concerned with stopping another round of QE, so they may support a larger cut in exchange for a more conservative QE approach.

The Bank will likely accompany any rate cut with a tiering framework to mitigate any negative effects on the banking sector.

In the spot FX market, the main determinant of the euro’s immediate reaction may be how deep rates are cut, rather than outright QE size. As such, a 20bp cut could send the single currency lower on the decision.

Looking at euro/dollar technically, further declines could see the pair test the 2½-year low of 1.0925 again.

On the flipside, a move above 1.1085 and the downtrend line drawn from the June top may see the bulls challenge the 1.1165 area.

The overall reaction, however, will probably depend on what signals Draghi sends during his press conference. If he reiterates that the ECB stands ready to do “whatever it takes”, that could reinforce the initial negative reaction. Otherwise, markets may sense a reluctance from the ECB to do more and push the euro higher on a ‘sell the rumor, buy the fact’ reaction.

It’s a close call, but the negative outcome seems slightly more likely. Draghi has a talent for talking the euro lower on ECB meetings, and this time may not be an exception, as there’s admittedly very little he can sound optimistic on.