EUR/USD is poised to re-activate the bullish cycle that was interrupted by Covid-19 in early March after the EU recovery fund finally took shape. Fundamentally and technically, the pair has several reasons to hope for better days, but the euro may need to win the data competition against the dollar during the summer break in order to reach fresh highs.

It was an intense four-day summit in Brussels as EU leaders struggled to agree on a recovery fund that the German and French leaders proposed in mid-May to help the bloc heal from the Covid-19 economic damage. Unlike June’s unsuccessful meeting, however, which ended a day earlier than scheduled, EU leaders extended the talks for a fourth day on Monday and made optimistic comments, giving investors an early signal that an agreement could be on the table soon. Hence, the breakthrough did not surprise the euro much on Tuesday, leaving insufficient bullish fuel for a rally above the key 1.1450-1.1495 resistance area against the US dollar.

Specifically, the summit, which was the second longest in the bloc’s history, concluded with a 750 billion euros pandemic fund, 390 billion of which will be channeled as unpaid grants to the worst-hit economies and the rest as loans. The amount of grants was smaller than the 500 billion plan Germany and France proposed in late May, but was larger than the 350 billion budget the four “frugals” – the Netherlands, Austria, Denmark and Sweden – demanded. Nevertheless, the midpoint solution and the willingness to achieve it created the much-needed feeling of political unity within the divided bloc and therefore added a strong footing under the euro. A long-term budget of 1.074 trillion for the 2021-2027 period was also a positive development, although it was slightly short of 1.1 trillion initially planned.

Where to look next?

With the historic pandemic package off the to-do list – national parliaments are highly expected to approve it – and the ECB holding a steady line, traders are wondering whether EUR/USD can still push above the 1.1450-1.1495 ceiling as the summer break approaches.

From a technical perspective, the pair has yet to confirm overbought conditions according to the RSI and the Stochastics. So, the short-term risk remains titled to the upside.

Fundamentals are also in favor of the common currency. Despite a second wave of infections taking place in the region, the increase of new virus cases has yet to worry the media in contrast to the US whose fresh record numbers have been repeatedly hitting the headlines, forcing several states to resume some of their lockdown measures. However, the virus itself may not be the main concern as we move to the second half of the year since spikes in new cases could be the new normal in the absence of a vaccine.

Instead, how economic data develops in the near future could be a source for caution and the trigger for volatility. On this front, the euro might be in a more advantageous position versus the greenback. If the EU further relaxes restrictions and the US remains behind its reopening plans, the massive stimulus measures in the EU could easily flow through the economy, helping the data to stage a faster recovery. On the other hand, the rebound in the US indicators may face a slowdown in the coming months if the government retains barriers to control the virus expansion. 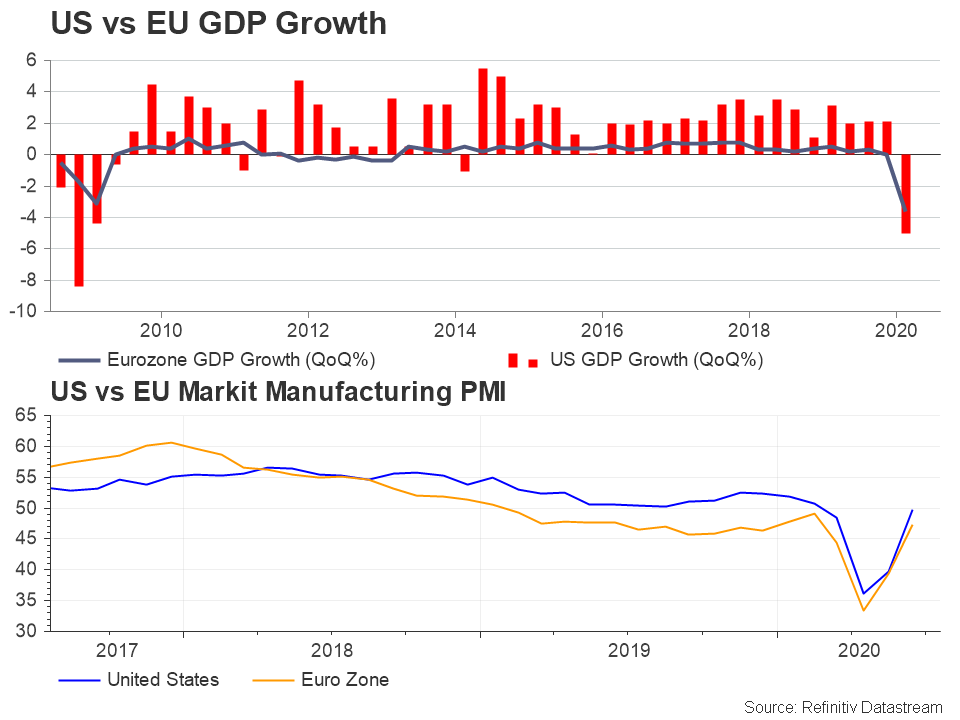 Failure to extend unemployment benefits and other pandemic-related aid programs before they expire by the end of this month could send the US economy close to a fiscal cliff and weigh on the dollar sentiment and benefit the euro. Still, with November’s elections nearing, President Trump would not like to disappoint his voters at a time when his rival Democrat Joe Biden is enjoying rising popularity. Hence, an extension is highly likely, though a reduction in payments and the number of receivers cannot be ruled out given Republicans’ backing on the topic.

Note that eurozone’s flash PMI readings for July are coming out on Friday and forecasts point to stronger readings, with the services sector expected to return to growth. Should the data beat expectations, EUR/USD may find another opportunity to claim the tough resistance within the 1.1450-1.1495 zone. Higher, the door would open for the 1.1600 mark, which is the 50% Fibonacci of the long 1.2554-1.0636 downtrend.