Euro could have a cold June – Special Report

The Eurozone’s currency has been driving on a slippery road for more than a year now and even if the 19-member bloc doubled its growth in the first quarter of 2019, downside risks in both the political and economic spheres continue to linger in the background, flagging another tough month for the euro.

In the first three months of the year, GDP growth in the Eurozone was 0.4% q/q, which was twice the increase in the fourth quarter of 2018 according to Eurostat’s second estimates despite the Brexit turmoil, the threat of US import tariffs and a slower expansion in China. Specifically, the biggest surprise was Italy which managed to return to growth (0.2% q/q) after two consecutive negative quarters put the country in technical recession, while the stagnating Germany, also had a reason to smile as economic activity heated up, marking an expansion of 0.4% q/q.

Consumers seem to be propping the expansion amid a lower unemployment rate and improvements in wage growth even if views on future spending remain negative. Yet all eyes are fixated on factories which are still in contraction according to the Markit Manufacturing PMI and the culprits are mainly the Brexit chaos and US trade protectionism. 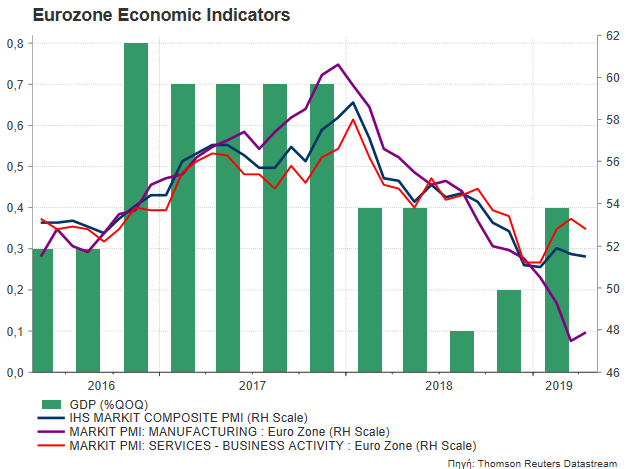 Brexit deal to return to Parliament

Having already been rejected three times in the British parliament, the UK Prime Minister, Theresa May, is still facing difficult times to persuade her own party and the opposition Labour Members of Parliament to accept her adjusted withdrawal plan out of the European union, a month after postponing the exit deadline to October 31.

The so far unfruitful talks have even brought her Conservative colleagues to their limits last week, forcing her to set a date next month for stepping down. The UK leader is now having another chance on June 3 to get her plan through the parliament before the summer break but the large divisions among lawmakers who are debating over a no deal Brexit, a second referendum or no Brexit at all, suggests that the results would likely be disappointing once again. Bet even if lawmakers find common ground, May’s political career could still come to an end this summer as she has promised to leave her position in case her plan is approved.

Do not forget the trade war

Directly or indirectly, developments on the trade front may also complicate economic conditions in the bloc. While a month ago markets were confident that China and the US  – the  EU’s major trade partners – are heading for an agreement, Trump’s warning over higher tariffs on $200 billion Chinese goods, potentially as of June 1, and his ban on the Chinese telecom giant Huawei revealed that controversies in key issues remain and therefore threats to the global economy are still alive.

Despite getting an exemption from the US metal tariffs, the European Union is likely to re-join the trade battle itself as well, as a report by the US Commerce department concluded that EU car imports hurt US national security and steal market share from American auto businesses. EU’s car surplus with its biggest export partner has been indeed rising rapidly since 2009, however, Washington decided last week to postpone a 25% import tariff on EU cars for up to six months and give room for negotiations. The G20 meeting in Japan on June 28-29 may next determine how cold or hot the trade war is going to get. 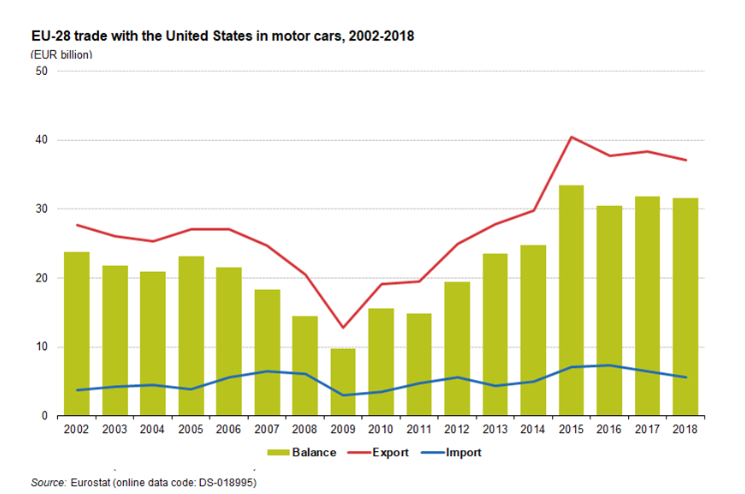 European parliamentary elections could be the pivot point in politics

The Europeans, including the Britons, will head to the polls on 24-26 May to elect a new Parliament for the next five years and while the event usually attracts little interest as proven by the low turnouts, the media will be closely monitoring the results this time amid a growing public perception that the traditional pro-European political groups have failed to deliver on migration, globalization and labour rights.

It is not only that the mainstream EU party groups such the centre-right EPP (which includes Merkel’s party) and the centre-left S&D (includes the British Labour Party) will lose the majority but the parliament may appear more fragmented if the share of seats for Eurosceptic parties including the Italian League and Mari Le Pen’s National Rally rise, potentially complicating future decision-making . In the case of Italy, such an outcome could give more power to the Five-Star Movement, as Deputy PM Matteo Salvini recently said that Rome should be willing to violate the EU’s deficit limit of 3.0% of GDP and increase debt to 140% if necessary. In France, the results could work as a vote of confidence for the President Macron whose tax reforms led to violent protests.

The UK has also committed to participate in the elections but after disappointing local elections for the governing Conservatives and the opposition Labour party, voters may turn towards harder-Brexiteers such as Nigel Farage’s month-old Brexit Party which wants a breakup from the EU and also changes in domestic politics. Yet British lawmakers may not take their seats if the UK government secures an exit deal before July 2, reducing the overall parliamentary positions from 751 to 705.

Blending all the above notes, the risk for the euro at least for the next month is skewed to the downside, giving little reason for the European Central Bank to change its accommodative monetary policy at its June 6 meeting.

An unexpected deterioration in European economic and political conditions may push EURUSD back to the 1.1100 bottom, while a bigger negative surprise may also open the way towards the 1.10-1.095 support area.

Any upside in the market may find it hard to exceed the 1.1320 resistance.