With the EU recovery fund deal now in the rear-view mirror, euro traders will turn their sights to the Eurozone’s preliminary PMIs for July, due at 08:00 GMT Friday. Forecasts point to an uptick in all indices, reflecting the smooth re-opening process in Europe. If so, this would be another piece of good news for the high-flying euro, whose rally may still have room to run, especially if the Fed hurts the dollar next week.

It’s been almost two decades since the financial community was more bullish on the euro area than the US, but here we are. A consensus seems to be emerging that the Eurozone has done a better job of handling both the healthcare emergency and the economic crisis, and that this will help it recover faster than America. Not only did Europe take a more proactive approach to the lockdowns, but the fiscal stimulus – even though smaller in size – was more targeted to supporting wages and jobs, limiting the damage to the labor market.

More importantly, European leaders used the crisis to push for greater fiscal transfers between economies – something unthinkable just a few months ago. There was some kicking and screaming, but eventually, the EU approved a large recovery fund that will distribute loans and grants to assist the most devastated economies. Grants are handouts that don’t have to be paid back, thereby helping highly indebted nations like Italy get back on their feet.

Make no mistake, this is a game changer. For a long time, this was the Eurozone’s Achilles’ heel – its lack of a real federal government like in the US that can help individual states when they are in trouble. Even though this latest step is still miles away from a proper fiscal union, it sets a very significant precedent that might ultimately give rise to a real risk-sharing instrument, like Eurobonds.

On Friday, we will get some fresh clues as to whether the euro area’s recovery is going smoothly. The manufacturing PMI is expected to touch the 50 level, which would signal stagnation, from contraction previously. The services print is expected to cross back above 50, indicating a return to growth. 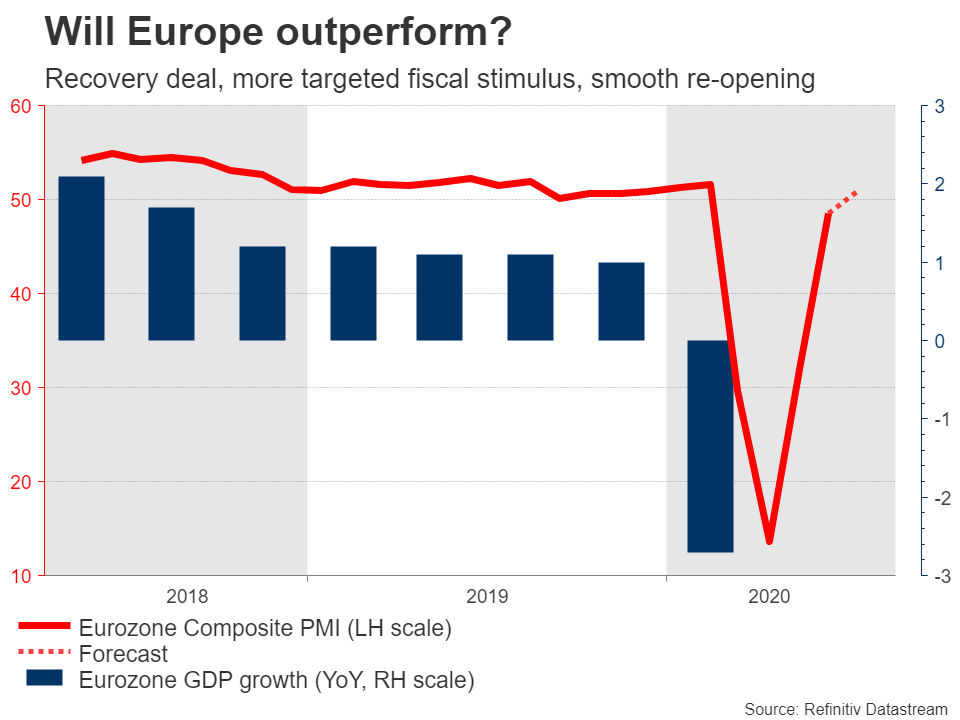 In reality, even numbers much above 50 wouldn’t necessarily imply a return to pre-crisis growth, as these surveys simply ask businesses how well they are doing relative to last month. Hence, if last month was horrible, the index might jump above 50 but that doesn’t mean the sector is growing at anything close to pre-crisis levels. That said, it’s still a step in the right direction that may add more fuel for the euro.

The French and German prints will be released ahead of the Eurozone prints, at 07:15 and 07:30 GMT respectively, and any market reaction might begin with them.

Euro can move higher still, if the dollar craters

Indeed, the currency market seems to think that Europe will outperform, judging by the substantial gains in the euro lately. The question now is whether the rally still has legs, or whether the good news is already reflected in the price, leaving the single currency exposed to a pullback.

Admittedly, much of the positive euro story seems priced in, but euro/dollar can still move higher, mostly on dollar weakness.

The Fed meets next week, and with the US economic recovery stalling, policymakers will be under pressure to act again. They could for instance strengthen their forward guidance, pledging to not raise rates again until inflation hits some target. If so, that could add more downside pressure for the dollar.

Looking at euro/dollar technically, another wave of advances may stall near the recent high of 1.1600, which is not far from the October 2018 peak of 1.1620.