The euro area’s preliminary CPI data for August will hit the markets at 09:00 GMT on Friday, and forecasts suggest that inflationary pressures remain muted. Another weak set of data could amplify expectations for an aggressive stimulus package by the ECB in September, keeping the euro under pressure. The big picture for the single currency is dark too, as the trade war combined with Brexit worries have brought the European economy to the brink of recession.

The Eurozone seems to be stumbling from crisis to crisis, with Germany experiencing a sharp slowdown lately, as the country’s exports have taken a heavy hit from the escalating US-China trade war. Concerns for a chaotic Brexit in October are also holding back business investment, making matters worse. Indeed, Europe’s largest economy contracted in Q2 and forward-looking indicators suggest it will shrink again in Q3. If confirmed, that would constitute a technical recession.

Besides Germany, the other big economies – France, Italy, and Spain – are not performing well either, for similar reasons. Business surveys like the PMIs increasingly suggest that corporate pessimism is mounting, particularly in the bloc’s manufacturing sector, which has felt most of the trade pain so far. 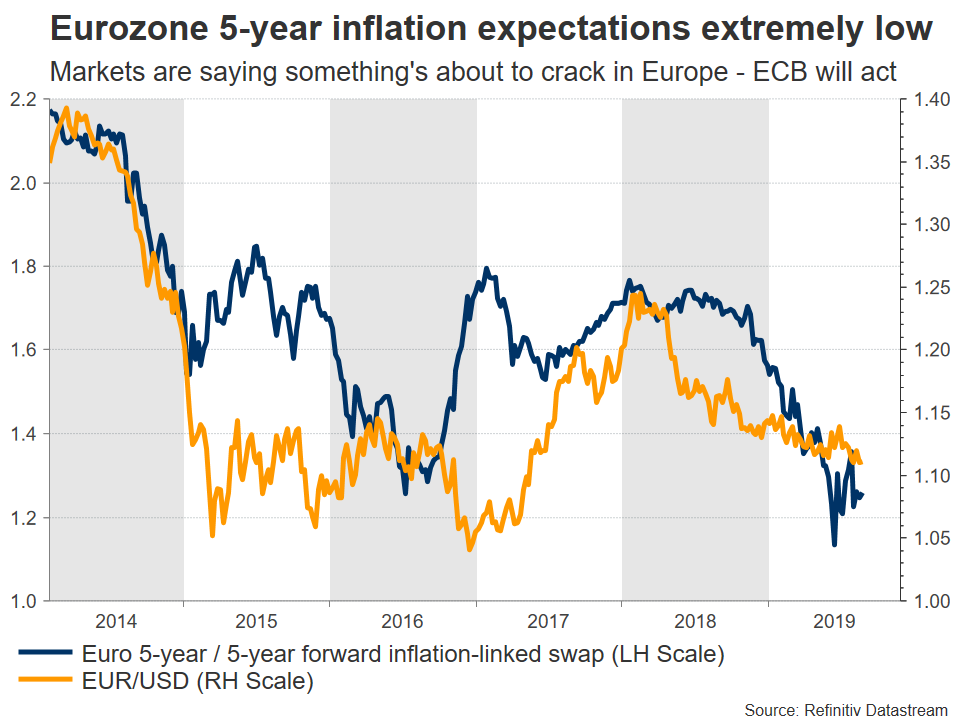 The European Central Bank (ECB) is therefore expected to act with force in September to support the ailing economy, both by slashing rates further into negative territory and by restarting its Quantitative Easing (QE) program. Indeed, sovereign bond yields in most euro area economies are at record lows, indicating that markets expect powerful easing. Despite borrowing costs hitting all-time lows though, market-based inflation expectations have collapsed to fresh lows of their own, signaling that investors don’t think the stimulus will be enough for the economy to truly recover.

Since an ECB easing bundle on September 12 is virtually certain, incoming data between now and that meeting could determine how big that stimulus package will be – for example, how many billion euros per month will be allocated for QE?

The upcoming CPI data will therefore be crucial, as they are the final inflation numbers before the central bank meets. In August, the bloc’s headline CPI rate is forecast to hold steady at 1.0% in yearly terms, while the core figure – that excludes food, energy, alcohol, and tobacco products – is expected to tick up to 1.0%, from 0.9% previously. Such low prints would hardly be reassuring, particularly given the plunge in inflation expectations, and could therefore raise the odds for an aggressive easing bundle.

As for the euro, the outlook is grim. Even if the Eurozone avoids a trade-war-induced recession, economic growth is slowing radically. And while the ECB could ‘throw the kitchen sink’ at the problem, monetary policy is already exhausted, so policies like QE will probably face diminishing returns and be less effective this time. Meanwhile, the only large European economy with a low debt-to-GDP ratio and hence ample room for fiscal stimulus is Germany, and Berlin has been clear it will only start to spend after a recession hits. The very real risk of a chaotic Brexit in two months is the icing on the cake.

Technically, declines in euro/dollar could stall initially around the 1.1050-1.1025 area, which capped losses twice in August so far. A bearish break would reinforce the negative outlook, opening the door for 1.0900.

On the upside, a move above the downtrend line drawn from the June peak and also above the 1.1165 level, could see scope for advances towards the 1.1230 territory.