The Federal Reserve will wrap up its latest meeting at 18:00 GMT Wednesday. No change in policy is expected, so the focus will be on Chairman Powell’s press conference at 18:30 GMT. With signs that the US recovery has flattened lately, Powell could adopt a more cautious tone, opening the door for more action in September. If so, that might be enough to accelerate the dollar’s freefall, though Thursday’s GDP numbers could provide some support.

The US economic recovery appears to have stalled in recent weeks, as the resurgence in infections led several states to pause or even roll back their re-opening plans. High frequency data like credit card transactions confirm as much, and the fear is that if this weakness continues for much longer, it might spark another wave of job losses.

Indeed, we have already seen some signs of stress in the labor market, with initial jobless claims spiking higher last week. Even some Fed officials acknowledged the recovery is “levelling off” lately, something that will almost surely be echoed by Chairman Powell.

All this suggests that the Fed will be under pressure to do more to bolster the recovery. The next step will likely be to strengthen the forward guidance, most likely by committing to not raise rates again until inflation hits, or slightly overshoots, the Fed’s 2% target.

However, this meeting may be a little too early for that.

Why wait? Three reasons. First, there’s no urgency to act right here and now. Financial markets are calm and yields on US Treasuries are near record lows, so the Fed won’t be in a rush. Indeed, waiting until September also allows policymakers to have a clearer picture of the economic recovery, and thus of how powerfully they should act. 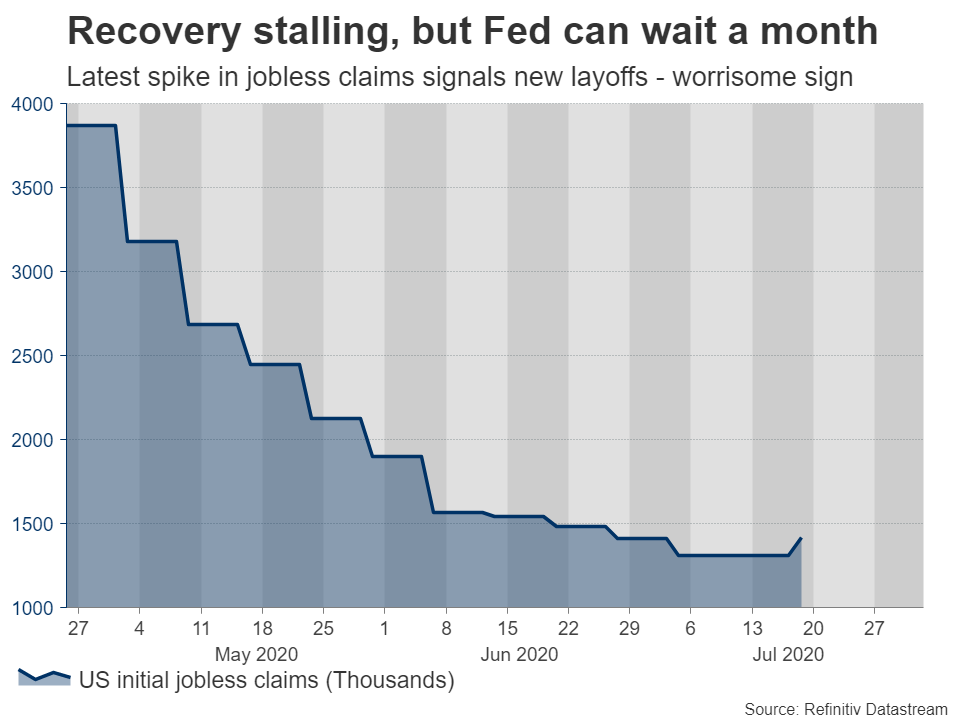 Second, uncertainty around what Congress will do is a wildcard the Fed will prefer to sidestep. Lawmakers are debating the size and composition of the next stimulus bill, with the Republicans favoring a ‘smaller’ package of around $1 trillion while the Democrats are pushing for a much larger package of $3.5 trillion. The Fed will probably wait for these talks to conclude before taking any major decisions, as a larger government bill would imply less need for Fed action.

Finally, policymakers have used up most of their ‘firepower’ already. They still have a couple of tricks left, like enhanced forward guidance and yield curve control, but they might prefer to delay those until their formal strategy review has concluded. This review has been ongoing for more than a year, and when it’s done, it will give a detailed analysis on the benefits of these policies.

All told, the Fed will likely use this meeting as a stepping stone, opening the door for more action in September. Chairman Powell could highlight that downside risks have intensified lately, and that with infections rising again, a dynamic recovery later in the year no longer seems as certain.

Such a dovish tone could spell more pain for the US dollar, which is already in freefall amid a combination of a resurgent euro and mounting concerns around the American economy.

What about upside risks for the dollar this week? Admittedly, it’s very difficult to envision Powell sounding optimistic given recent developments.

That said, the GDP data for Q2 on Thursday are a different story. The consensus forecast is for an annualized contraction of 34%, which may be a little exaggerated. The New York Fed’s Nowcast model for example points to a much smaller fall of 14.3%. Now to be clear, even if the GDP numbers are stronger than expected, any upside for the dollar may be short-lived. The trend is to the downside.