The Federal Reserve’s Open Market Committee (FOMC) will conclude its two-day monetary policy meeting on Wednesday, announcing its decision at 18:00 GMT. After unprecedented central bank intervention since March to prevent a virus-induced economic meltdown, policymakers are not expected to make significant changes to their emergency programs this week. However, with the initial recovery from the lockdown easings proving stronger and faster than anticipated, everyone will be watching to see whether Fed Chairman Jerome Powell shares this optimism when he briefs reporters at 18:30 GMT.

Bigger risk of second wave in the US

There can be no doubt that the lifting of the lockdown restrictions is having a direct effect on economic activity around the world. Business surveys like the IHS Markit PMIs indicate a recovery got underway in May and is almost certain to have accelerated in June as the social distancing rules are relaxed further. The signs of green shoots are a welcome relief in Europe where they coincide with falling rates of COVID-19 infections, suggesting the shutdowns worked.

However, in the United States, there are ongoing fears that the lockdowns were eased too soon as, with the exception of some states like New York, the daily rise in infections has fallen only marginally. Making matters worse, widespread mass protests across many large American cities have heightened the threat of the US becoming engulfed by a second virus wave. The risk of a second spike is probably one of the reasons why the Fed has so far maintained an overly cautious view on the outlook, stressing the many uncertainties that still hang over the economy. 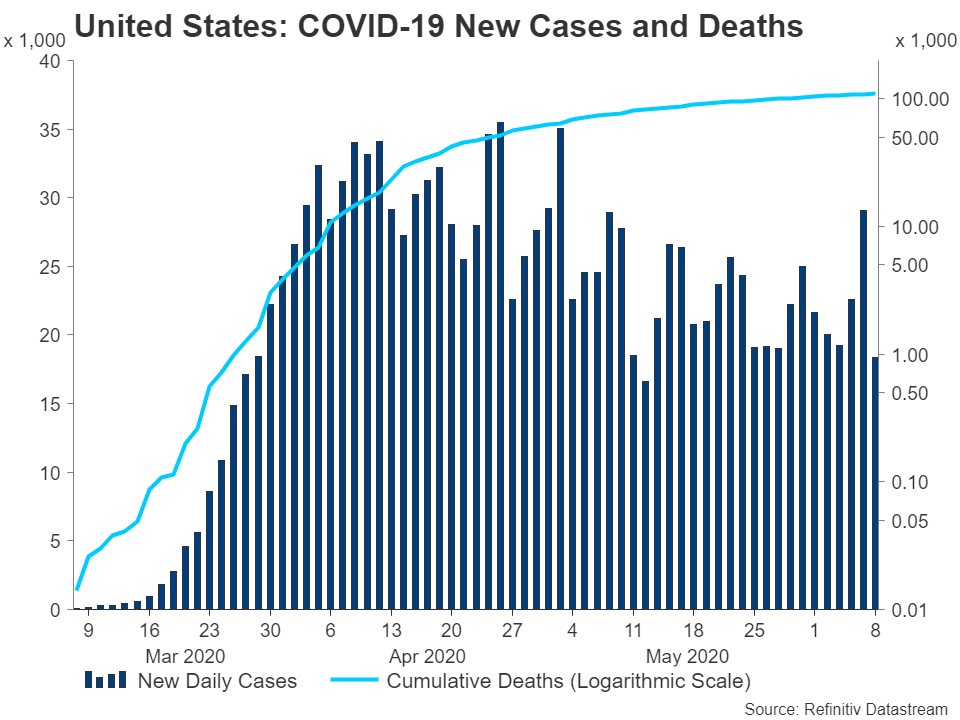 Is strong jobs report proof that economy is on the mend?

One piece of data that should help the Fed feel a little more confident about the recovery is the May jobs report. The US economy added an astounding 2.5 million jobs in May, far exceeding forecasts that 8 million more people would join the dole queue. The data not only points to the government and Fed policies having success in limiting the downturn but also to businesses rehiring after they’ve reopened, underlining the notion that the virus impact will be brief and temporary.

However, it’s far too easy to get overexcited by the improving data as the numbers will undoubtedly look impressive when many businesses go from zero activity to some activity. The question, is how far will the recovery go? Even if a second wave is averted, some safety measures such as restrictions on the size of gatherings in public places like retail stores and restaurants will likely stay in place at least until a vaccine becomes available. The new rules, as well as tough sanitation guidelines, could deter consumers from reverting to their pre-pandemic spending habits. Hence, even though a recovery may look V-shaped at the early stage, it may begin to flatten out in the absence of a medical breakthrough for eradicating the coronavirus.

All this will probably keep the Fed on its toes and there’s little expectation that policymakers will signal any scaling down of their extraordinary stimulus measures anytime soon. Fed chief Powell has been keen to reaffirm his ‘whatever it takes’ pledge in recent remarks and will likely do the same again on Wednesday. His downbeat view along with comments from other FOMC members has led to speculation that policymakers’ next move will be to introduce yield curve control.

However, such an announcement is unlikely at the June meeting given the relative stability in the markets at the moment and the Fed will probably want to save its remaining firepower for a rainier day. Instead, investors will be hoping to get more clarity on the Fed’s current and future plans, especially as the central bank continues to wind down its daily purchases of Treasury notes as financial conditions ease. Any further reductions in bond purchases could spark fears of tapering and that’s the last thing the Fed will want to do. 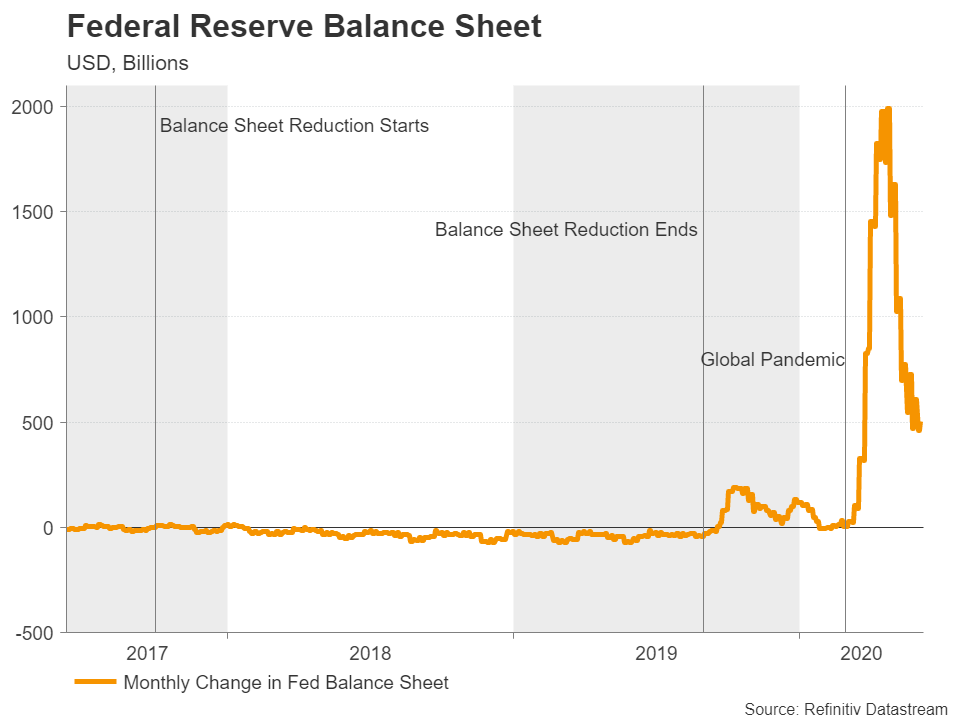 There are also some question marks about how long the Fed will keep its emergency programs running – specifically, what is the Fed looking for in the data before it can begin to scale back some of its stimulus.

But as far as the US dollar is concerned, it will be the overall tone of the FOMC statement and Powell’s press conference that will matter. The improving risk sentiment on the back of the recovery hopes drove the dollar close to the 110 level against the yen last week. It has since pulled back towards the 108 area but should Powell sound somewhat more upbeat on Wednesday, dollar/yen could soon be revisiting the 78.6% Fibonacci retracement of the February-March downtrend at 109.85. A break of this resistance would bring the 111 level within reach.

However, if the Fed casts doubt on the strength and sustainability of the recovery, dollar/yen could extend its downside correction and slip back below the 50-day moving average, around 107.65. In the event of a sharper sell-off, the pair could test the May lows just below 106.