A flurry of UK data including GDP numbers for April will hit the markets at 06:00 GMT on Friday, and forecasts point to abysmal readings. Yet, economic data hardly move the markets anymore, so the pound’s performance will likely be shaped by a combination of Brexit news and global risk sentiment. The risks surrounding the currency seem tilted to the downside, though any potential losses may be more visible against the resurgent euro, not so much against the dollar that’s under pressure itself.

Dismal data, but does it matter?

British GDP is forecast to have contracted by a scary 18.4% from the previous month in April, as the pandemic-fighting lockdown measures are likely to have brought economic activity to a halt.

In normal times, one would have expected this to be horrible news for the British pound, but these aren’t normal times. The FX market barely reacts to economic data anymore, with the thinking being that this is ‘old news’. Everyone knows this recession will be deep; what truly matters is how quickly each economy bounces back.

Indeed, since this crisis hit, Cable has been trading mostly as a function of risk appetite. That has a lot to do with the dollar, which has been acting like a defensive asset for the most part. But it’s not just the dollar – the pound itself has become more sensitive to ‘risk’. That’s probably owed to the UK’s large current account deficit, which needs financing from abroad and therefore becomes a pain when the world is in recession and cross-border capital flows dry up.

So, can stocks keep going?

Since Cable seems so correlated to stock market performance and risk sentiment nowadays, the real question may be whether the party in stocks can keep going. Admittedly, there are strong arguments both ways. 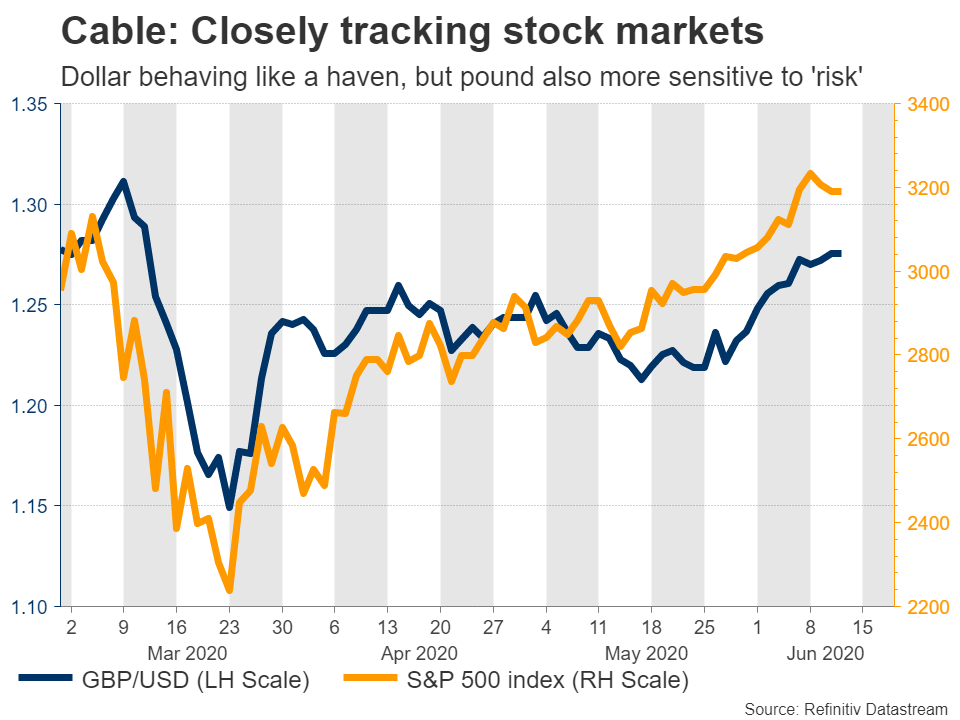 Arguing for more upside is the fact that many institutional investors were sitting on the sidelines during this rally, so with mounting signs that the worst is now behind us they might deploy some cash back into stocks. Any positive news on a virus vaccine could help too. There’s also the long-term view that interest rates will remain low ‘forever’ and that fiscal discipline is now dead globally, so government deficits will likely remain massive long after this crisis ends.

Arguing for a pullback are the boiling US-China tensions that are becoming worse by the day, the risk of a second wave of infections in the US following the recent nationwide protests, and the looming US presidential election where the Democrats have been gaining in the polls. Furthermore, while the unemployment rate seems to be moving back down, it might take years before we reach pre-covid levels, which implies a softer outlook for consumption. The rich valuations of US stocks right now are another risk.

Beyond risk sentiment, the other deciding factor for sterling will probably be the Brexit saga. The latest round of talks concluded yet again with very little progress, and a June-end deadline to extend the transition period beyond December is approaching fast. However, the UK government has repeatedly ruled out such an extension. That would automatically make a no-deal exit at the end of the year the default option.

Ultimately, some extension might be agreed even after June, even if that would involve a complicated legal process. In the meantime though, markets would likely reprice a Brexit risk premium on the currency.

Does that mean Cable is heading lower? Maybe not, since a lot depends on the dollar side of the equation and stocks. Instead, any sterling losses arising from Brexit worries may be more visible in euro/sterling, especially now that the euro has gotten its feet under it amid signals for an EU recovery fund.

Taking a technical look at euro/sterling, if Brexit uncertainty intensifies, the pair could challenge the 0.9050 zone again, where an upside break would turn the focus to 0.9140.

On the downside, if the pair breaches the 0.8860 area, the bears may target the 0.8680 support next, which halted the drop multiple times recently.