Following a roughly as expected jobs report, the Canadian dollar will be next waiting for the Bank of Canada’s rate announcement and the short explanation delivered along on Wednesday at 14:00 GMT. However, the event itself may not be exciting as no major adjustments are expected to take place. Perhaps, a speech and a video press conference held by the BoC chief on Thursday at the Canadian Chamber of Commerce could grab greater attention on Friday at 16:30 GMT, triggering some volatility in the currency.

There is growing optimism that Canada could recover more rapidly in the third quarter than the US after a historical contraction in Q2, and Friday’s jobs number did not exclude the case. The employment change in Canada came in line with forecasts, remaining positive for the fourth straight month in August. Also, while the job gains were almost half of July’s increase, this is not necessarily a negative sign as a majority of workers who were initially displaced due to the pandemic are already back to work, with stats showing that more than 50% of the lost jobs have been already refilled due to the reopening plans. So, less people remain to be rehired. 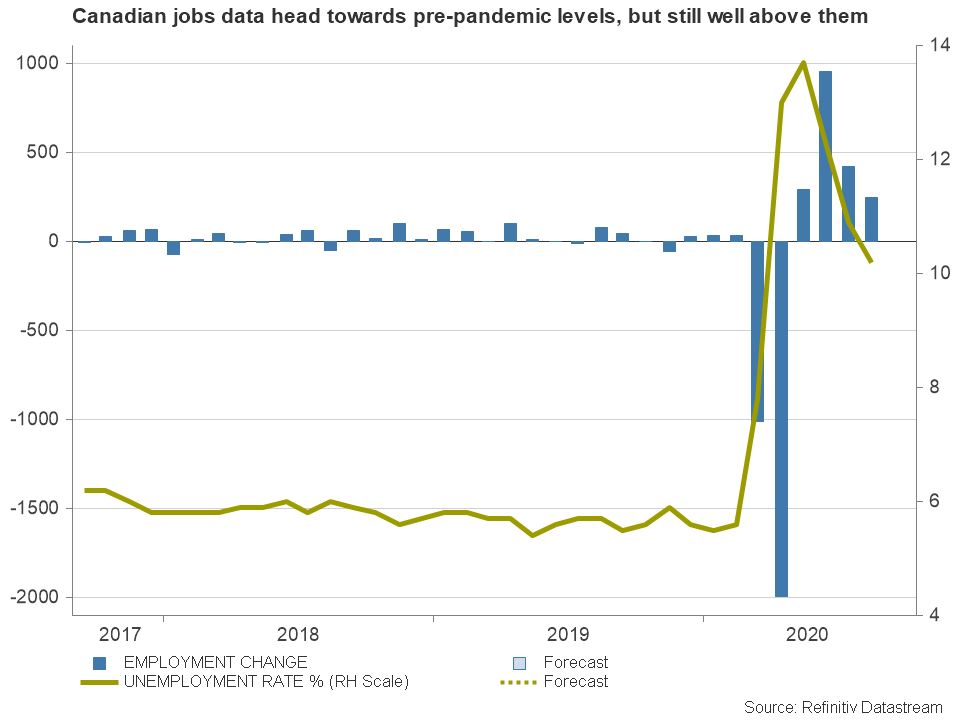 Currently another injection of fiscal stimulus as soon as the end of this month is looking more likely in Canada than in the US as Trudeau’s political future looks more certain than President’s Trump. Hence, the BoC may not rush to release liquidity before it views government’s plans.

The BoC chief, Tiff Macklem acknowledged last month that although there are signs of recovery, the path ahead could be bumpy, and interest rates may remain at the current record low of 0.25% at least until the end of 2022. The asset purchase program has also been driven to its limits, expanding more than the Fed’s in terms of GDP. So, markets will pay a close attention to Macklem’s speech on Friday to figure out what else could be done on the monetary front to further support the economy.

Infection cases do not look like a second wave in Canada yet but the close borders with the US could trigger one if an effective vaccine is not approved for release soon. Moreover, exporters send 75% of their international sales to the US, therefore any economic deterioration in the States could easily spread into Canada and policymakers should be prepared for that.

Now, what other methods could be used? Well, the Fed chose to enhance its forward guidance, providing some direction to the global central bank community earlier this month. Unable to drive and sustain inflation measures at its 2% goal over the past years- a failure most of its counterparts have also been through – the Fed decided to adopt an averaging inflation targeting, where interest rates would remain low even if inflation passes the 2% threshold. That somehow ensures that monetary policy would remain accommodative for longer.

Back in Canada, the “Let’s talk inflation” survey released by the BoC and Macklem’s remarks about factoring public views in policy decisions at the Jackson Hole symposium last month signalled that Canada could follow suit. Thus, markets would be eagerly waiting to hear any hints on the issue this week, and more importantly, how this could be set within the current symmetrical 1-3% range target. Note that the core Consumer Price Index (CPI), which the central bank closely monitors to decide on policy, retreated back to 0.7% y/y in August, while the headline CPI eased to 0.1% y/y. 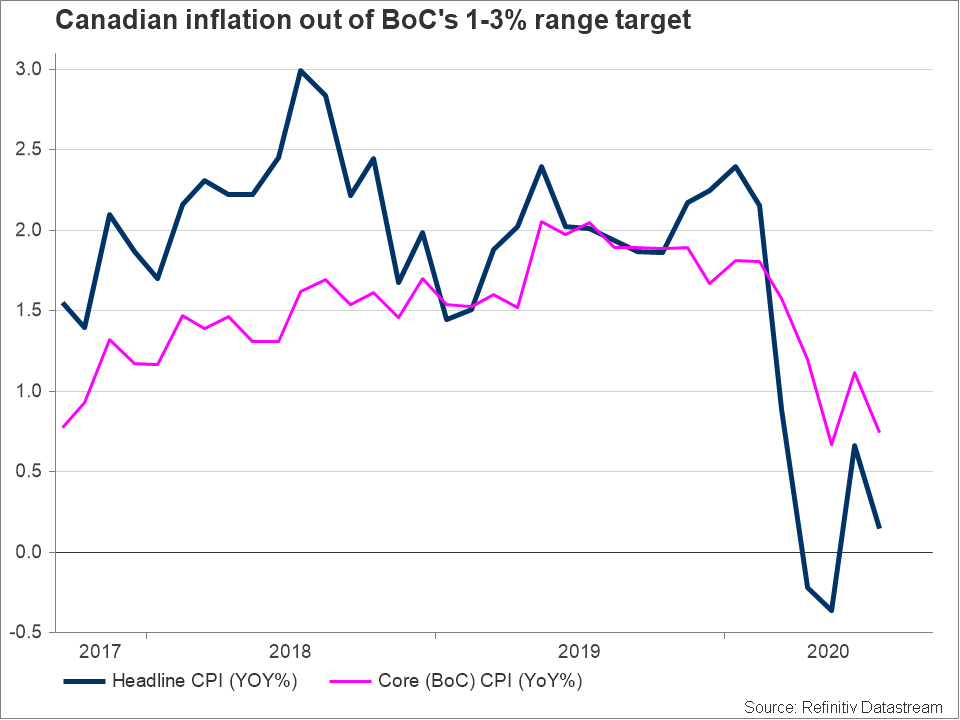 Currency talks may be on the agenda, but not a concern yet

A strong currency is not positive for an export-oriented country such as Canada – especially during the coronavirus crisis which limits demand, causes supply disruptions, and raises uncertainty – as this makes domestically-produced products more expensive overseas. Therefore, the loonie’s appreciation over the past six months underpinned by the weakness in the US dollar, rising oil prices, and the relatively improving virus conditions, could come under the spotlight. However, against the greenback, the currency has not breached its 2020 high yet, so its rally may not concern policymakers much this week as long as exports and imports continue to strengthen from recent lows. Perhaps, if US policies feed more dollar selling, further boosting the loonie, talk around the issue could intensify in the coming meetings.

As regards the market reaction and where the loonie could be located versus the dollar at the end of this week, it could largely depend on the BoC’s economic outlook given all other things being unchanged. Should Macklem use a more cautious language about the recovery prospects, the loonie could erase some gains and it would be interesting to see if USD/CAD can finally break above the long-term trendline and the upward-sloping channel in this case. Such a move may send the pair up to the 50-day simple moving average (SMA) and the 23.6% Fibonacci of the 1.4667-1.2993 downleg, around 1.3400.

Otherwise, if the BoC appears optimistic about the path of the economy, adjusting its inflation and growth projections moderately, the pair could retest the 1.3040-1.2985 area. Clearing this region, the sell-off could get new legs within the descending channel, especially if the December low of 1.2950 gives way, shifting attention towards the 1.2880 and 1.2760 levels.