The all-important US employment report for March will see the light at 12:30 GMT on Friday, and investors will be anxious to find out exactly how many Americans lost their jobs at the onset of the virus crisis. Alas, since these data were collected in the first half of March, before many of the virus-related shutdowns, they probably won’t reflect much of the devastation in the labor market. As for the dollar, the picture still looks positive amid the market turmoil.

For the first time in a decade, nonfarm payrolls (NFP) will probably turn negative in March, indicating that Americans are losing jobs at a rapid pace. Forecasts suggest that NFP will clock in at -124k, from 273k in February, pushing the unemployment rate up to 3.8% from 3.5% previously. Average hourly earnings are projected to hold steady at 3.0% in yearly terms but admittedly, with so much attention on job losses, wage growth might be of secondary importance.

Yet, investors might view these figures as somewhat outdated. The data was collected during the first half of March, which means that they won’t reflect most of the damage from the virus-fighting lockdowns, as those came into effect during the second half of the month. Consider this: only 282k Americans filed for unemployment benefits in the week that ended March 14, but that number skyrocketed to almost 3.3 million in the week ending March 21. 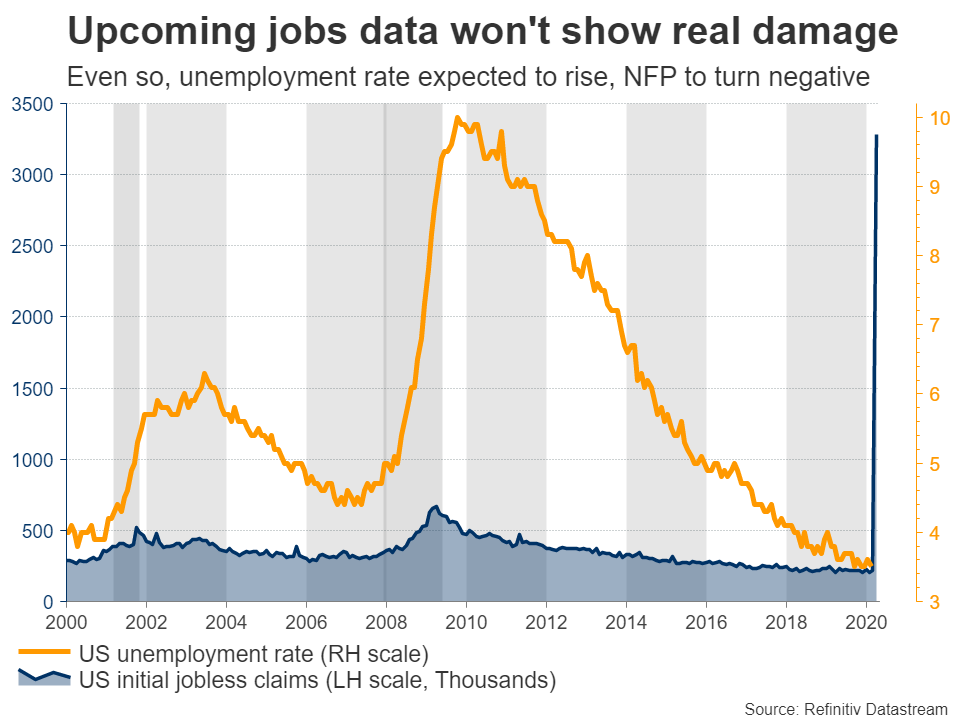 Hence, although this week’s employment report will show some weakness, that might only be a small taste of the real damage in the labor market, and the true fallout will be revealed when the numbers for April are released next month.

So will the dollar care?

The simple answer is probably not. Everybody already knows that millions of people have been laid off between the time this jobs survey was conducted and now.

If anything, the risks surrounding the dollar from this report may be skewed to the downside. Whereas a slightly stronger than expected number might be brushed aside as being outdated, and hence not lift the dollar much, a substantially weaker-than-expected figure could signal that the economy was already losing jobs rapidly even before the lockdowns, pushing the greenback lower.

The ISM non-manufacturing PMI that will be released at 14:00 GMT could also play a large role in driving the dollar, as well as stocks. Because most of the responses in that survey are usually collected during the second half of the month, it might be seen as more relevant.

But overall, don’t count the dollar out

In the big picture though, the greenback still seems attractive. The world’s reserve currency has been trading like a safe haven amidst all the mayhem, and even though things have calmed down lately (resulting in the dollar pulling back), that may not last long. Investors seem to be front running an improvement in the global economy, but will markets remain so tranquil in the coming weeks as economic data fall off a cliff, unemployment soars, corporate earnings forecasts are slashed to oblivion, and the lockdowns in several countries are extended?

From this lens, the worst may not be over, and the dollar seems likely to outperform the likes of the euro, as well as the commodity-linked currencies, with the loonie especially being beaten down by the plunge in oil prices. That said, the greenback could underperform the defensive yen if the market turmoil resumes.

Taking a technical look at euro/dollar, if sellers stay in control and pierce below 1.0900, the next obstacle to the downside might be the 1.0830 zone.