Oil drowns in a flood of supply, no lifejacket for now – Special Report

Oil prices traded negative for the first time ever this week, as physical space to store the liquid has almost run out amidst an oversupply of epic proportions. In the near term, there’s little that can save oil prices, and we might even see a repeat of the oil-crash movie in mid-May as storage space runs out entirely. That said, if and when storage room runs out, that could also be the point of ‘peak oversupply’ and perhaps the bottom for oil prices.

For the first time in history, the price of WTI crude oil briefly dropped below zero, falling as low as -$40.32/barrel in a move that has left the world scratching its head. The virus-fighting lockdowns have depressed demand for fuel, and while OPEC and its allies agreed to cut supply to balance the market, the 10 million barrels production cut they promised is just a drop in the bucket compared to how much demand has collapsed. The result is an oil glut like we have never seen before.

But how can a commodity go negative? It has to do with storage capacity, or rather, the lack thereof. The WTI futures contract for May expired this week, so people who were long that contract on expiry would need to take physical delivery of that oil. However, storage space in Cushing, Oklahoma – the main delivery point for US oil contracts – was fully booked. 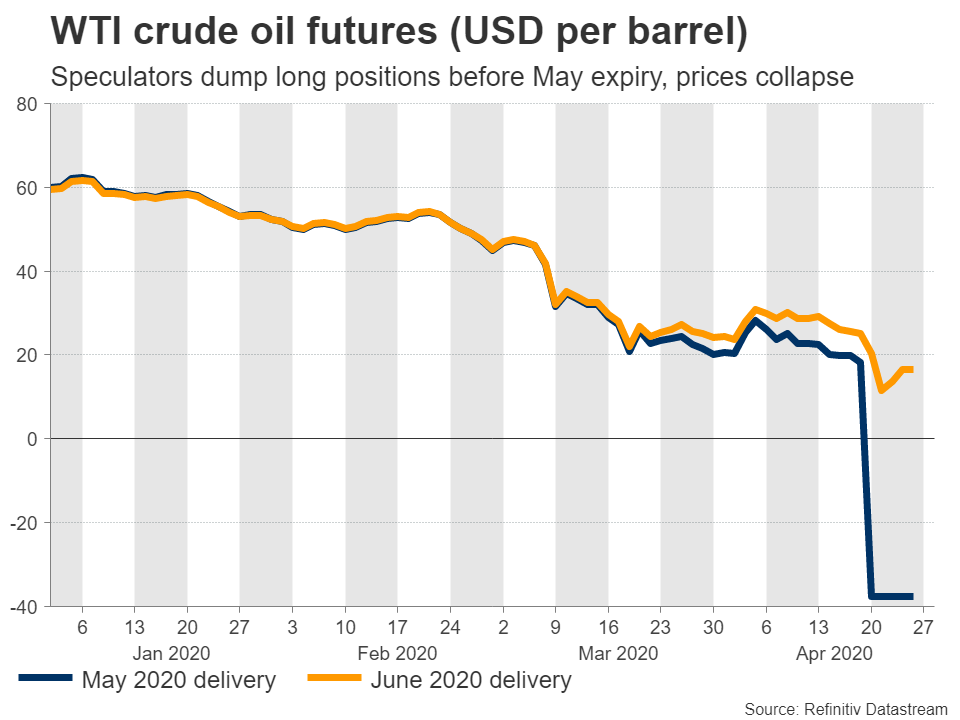 Therefore, some investors were left holding a contract they did not want and could not take delivery of, and when they all tried to sell in a market without buyers, prices literally fell through the floor. They fell enough to compensate someone for incurring the physical storage costs. In simpler terms, storage space is so limited right now that people were actually paid to take delivery of oil.

What does it mean?

In brief, it’s not good. It shows that there’s too much oil lying around that nobody wants, and storage space has almost run out already. But the damage to market psychology shouldn’t be ignored either. When investors see oil trading negative, that hurts confidence, perhaps permanently. At the very least, speculative investors will now think twice before entering a long position in oil.

In the short run, prices are likely to stay low, and we might even see a repeat of the oil crash in mid-May. The June WTI contract expires on May 19, and if inventories continue to build at the pace they have in recent weeks, storage space at Cushing, Oklahoma could be filled 100% before then.

That could set the stage for another collapse at the front-end of the curve, as speculators who are long try to exit their positions without many willing buyers to take those on. Even if spot oil prices don’t fall to negative again, they are still likely to head lower as buying interest evaporates. 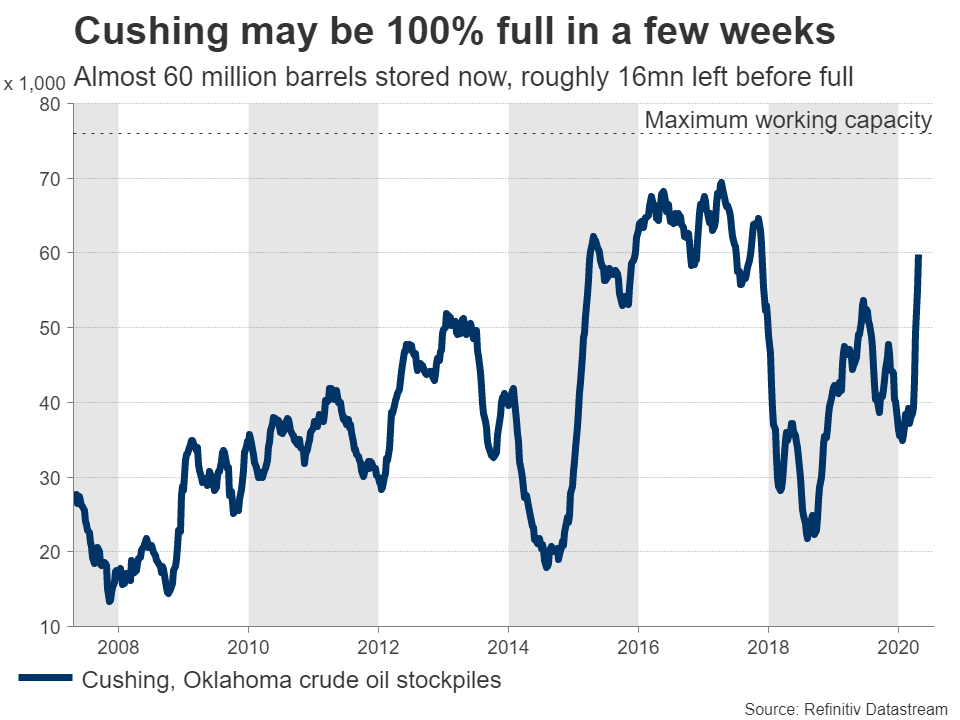 For this to be avoided, either new storage space needs to somehow magically appear, or demand needs to recover substantially and quickly. In other words, the best chance that oil prices have for avoiding another crash is economies reopening soon and people travelling again. While some economies may indeed start to reopen before mid-May, they will only do so in baby steps, so it’s unlikely that demand will pick up early enough to balance things out.

What happens if there’s no storage space?

At that point, supply would need to drop massively, to the point that it equals demand. It’s quite simple: if you can’t store oil anywhere anymore, you can only produce as much as is taken out of storage spaces every day. Therefore, if and when we reach that point, many producers will be forced to cut their output.

Funnily enough, that would help stabilize prices and sow the seeds for a gradual recovery. Once supply drops so drastically, even a modest recovery in demand as the lockdowns are slowly lifted around the globe would help eliminate much of the existing oversupply, ultimately bringing balance back to the market.

A further boost may come from the fact that many smaller producers that will be forced to shut down might not reopen again in the near future. In the US shale industry for example, many companies were already heavily indebted and losing money even before this price crash, so they could go out of business entirely. As such, when things finally return to ‘normal’, some supply may be lost permanently, even if the US government bails out some of these firms.

All told, the troubles in the oil market are probably not over yet, and could even worsen heading into May as storage capacity evaporates entirely. However, when we do run out of storage space, that will probably be the point of ‘peak oversupply’ and the worst may be over after that.

As such, that could mark the bottom for oil prices, after which the outlook brightens substantially. Supply would be forced to collapse, and at the same time, demand may begin to recover as the lockdowns are hopefully lifted around the same period, paving the way for an eventual recovery.

Taking a technical look at WTI crude, if sellers penetrate back below the 15.50 zone, their next target might be the 10.60 region.

On the upside, a recovery could meet initial resistance at around 19.00, which was a previous support territory, before the focus turns towards 20.60.

In the FX market, the currencies most sensitive to oil prices are the Canadian dollar, Norwegian krone, Russian ruble, and the Mexican peso. All these currencies could stay under pressure along with crude prices for now, before recovering alongside them in the longer term.