Oil price retreat a relief for global economy; are more shocks on the way? – Commodity News

The world experienced its biggest oil price shock since the 1991 Gulf War this week after Saudi Arabian oil facilities came under fire from suspected Iranian drone and missile strikes on Saturday. The attack shut down about 50% of Saudi Arabia’s daily oil production, amounting to 5% of global supply, sending prices soaring by more than 20% in the immediate aftermath. But as the United States appears to be reluctant to engage in a military conflict with Iran and calm is seemingly restored in the markets, are further confrontations between the US and its Middle East foe inevitable?

Tensions has been brewing in the Middle East for some time now as Iran has been stirring trouble in the region ever since the US unilaterally pulled out of the nuclear agreement between the West and Iran in May and imposed tough sanctions on the country, including on vital oil exports. In retaliation, Iran has been flexing its muscles in the Gulf, attacking and seizing oil tankers sailing through the strategically important Strait of Hormuz.

Iran has also been stamping its influence in the region by supporting Houthi rebels in Yemen, who are fighting Saudi-backed government forces in an ongoing civil war in the country. The Houthi rebels have claimed responsibility for the attacks, but it’s unlikely they have the capabilities to launch an advanced operation on the scale that targeted the two Saudi plants. Plus, evidence suggests the strikes originated from Iran.

But despite the highly volatile situation and the potentially devastating impact of a full-blown conflict, the surge in oil prices appears to have been just a knee-jerk reaction and the commodity has retreated substantially from the 4-month highs set on Monday.

Brent prices peaked at $71.95 a barrel, just above the 78.6% Fibonacci retracement of the April-August downleg at $71.38. They’ve since fallen to nearer the 38.2% Fibonaci at $63.41 and a further push downwards would take prices towards the 23.6% Fibonacci at $60.53, shifting the newly established bullish bias back to neutral.

Market panic faded quickly after President Trump stepped back from his initial response to the attacks when he had tweeted the US was “locked and loaded depending on verification”. And although the US has been keen to point the finger at Iran, Trump later told reporters he would “like to avoid” war with the country.

Trump opts for sanctions than war

That’s not to say Trump has ruled out military action and a major escalation is still highly possible, especially if Iran carries out further attacks in the coming days or weeks. But as the US and Saudi Arabia build up the case to incriminate Iran, Trump is taking the sanctions route, ordering his Treasury Department to slap more restrictions on Tehran.

In addition to the receding risk of an imminent war, reassurances from Saudi Arabia that production will be restored quickly has further calmed markets, helping prices retrace about 50% of Monday’s gains. The kingdom is hoping to bring production back to normal levels by the end of September and to have fully restored its output capacity by the end of November.

The minimal market impact of the attacks must be a huge relief for policymakers around the world given the fragile state of the global economy and the fact that many central banks have just started to ease monetary policy. A big shock in energy prices would make it difficult for central banks to cut rates and could even force rates to go up as higher fuel prices would feed through to consumer prices. But businesses would also be hurt as their costs would rise, with only energy firms benefiting. All in all, an oil shock would be a bad recipe for global growth. 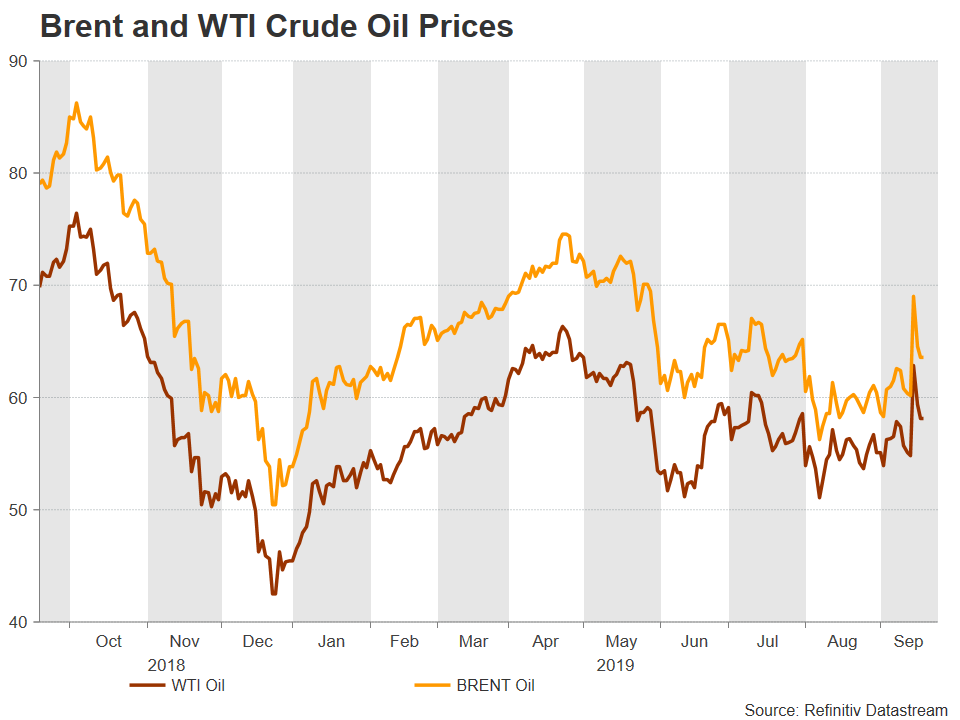 It’s hard to deny this is not a reason that is motivating President Trump to steer clear of a potentially messy conflict in the region as higher energy prices would not go down too well with his supporters when elections are just around the corner. Hence, the chances of Trump ordering an attack on Iran are low at this point.

Is the US being provoked by Iran?

What is more unpredictable, however, is Iran’s behaviour. Tehran’s recent actions suggest it could be trying to lure the United States into a military conflict and it may only be a matter of time before the situation erupts into something much more severe.

Should these attacks be followed by more strikes on Saudi facilities, another surge in oil would take the price of Brent to its 2019 high of $75.60 a barrel. If a much bigger crisis were to start unfolding, the next target for the bulls is likely to be the $86-88 region, which encompasses the 2018 peak of $86.74 and the 161.8% Fibonacci extension of $87.79. 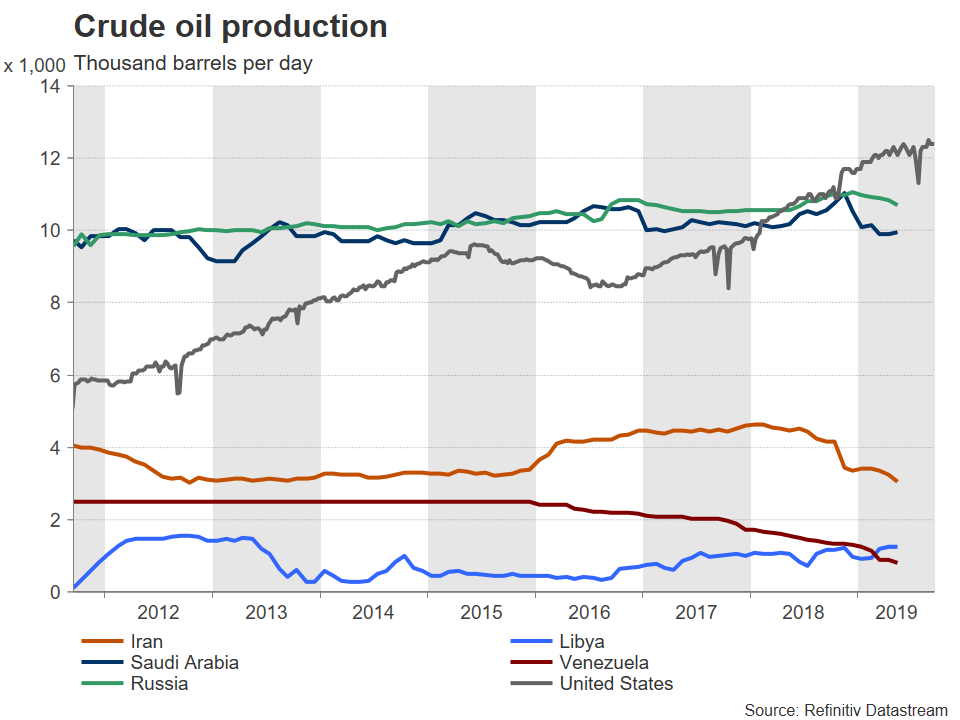 One thing’s for certain, last weekend’s events have not only highlighted the vulnerability of Saudi Arabia’s oil infrastructure to Iranian strikes, but also the lack of capacity by other nations to sufficiently substitute Saudi output should they be required to.