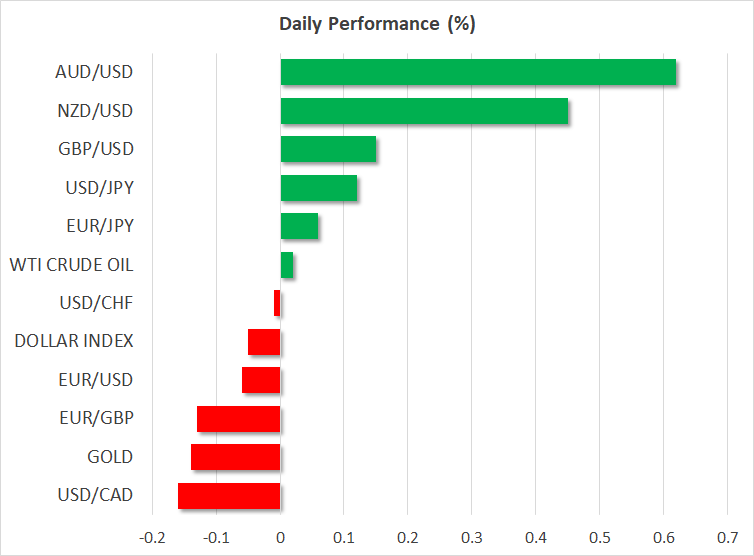 Trading got off to a relatively calmer start on Monday, with the US dollar backing away from more than two-week highs and global equities moving higher on the back of Wall Street’s gains on Friday. European government debt was under slight pressure following last week’s strong rally as US Treasuries dipped ahead of the 4th of July long holiday weekend.

Nevertheless, the pickup in yields today is relatively modest compared to the scale of the pullback since mid-June and the broader trend downwards is lending some support to risk sentiment at a time when recession warning signs are left, right and centre.

The past week was characterized by one dismal data after another for the US economy. Consumer confidence is at its lowest since February 2021 and personal spending figures seem to be catching up with the downbeat surveys. Meanwhile, manufacturers are seeing new orders shrink and cutting back on hiring plans. The latest jobs report due days away should reveal more on the state of America’s labour market.

Summing up the negative run of data was the Atlanta Fed’s latest GDPNow estimate that put US growth at -2.1% in the second quarter.

If there is a silver lining in all this it's that inflationary pressures may finally be cooling off, at least in the United States. The Fed’s preferred inflation metric – the core PCE price index – moderated for the third month in a row and the ISM’s prices paid index for manufacturers headed in a similar direction in June.

The sudden reversal in the data from upbeat growth indicators and an endless surge in inflation to clear signs of a slowdown and easing price pressures has led to a sharp repricing of rate hike expectations for the Fed. Investors now see the Fed funds rate peaking about 75 basis points below the level they were predicting just a few weeks ago.

It’s possible that the minutes of the Fed’s June policy meeting due on Wednesday will cast doubt on these revised rate hike expectations by the markets, but for now, this is helping stave off a bigger selloff in risk assets.

The S&P 500 managed to recoup 1% of its weekly losses on Friday, and although e-mini futures were in the red on Monday, European shares opened with solid gains. Most Asian indices notched up gains too despite fresh worries about China.

A flareup of Covid cases in an eastern province in China prompted mass testing by authorities locally and in the surrounding regions. Separately, Shimao Group Holdings became the latest Chinese property developer to default on its debt.

In the currency markets, the dollar index was last trading flat on the day, with the euro and yen holding steady after a late bounce-back on Friday. The euro was last week’s worst performer versus the dollar as stronger-than-expected Eurozone inflation numbers heightened fears about stagflation. Moreover, Germany just reported its first trade deficit in three decades amid soaring energy prices and weaker exports, and this could be a sign of more trouble to come for the single currency.

Sterling had slightly more positive momentum on Monday, climbing just past the $1.21 level, but the biggest winners were the Australian and New Zealand dollars, which were attempting to recover from Friday’s two-year lows.

The aussie’s 0.5% rebound today is likely being driven by the improved risk tone and a technical correction as commodities such as oil and copper remain deeply pressured. The Reserve Bank of Australia is almost certain to raise the cash rate by 50 bps early on Tuesday and policymakers could give the aussie a bit of a boost if they maintain their hawkish stance and shrug off recession risks.