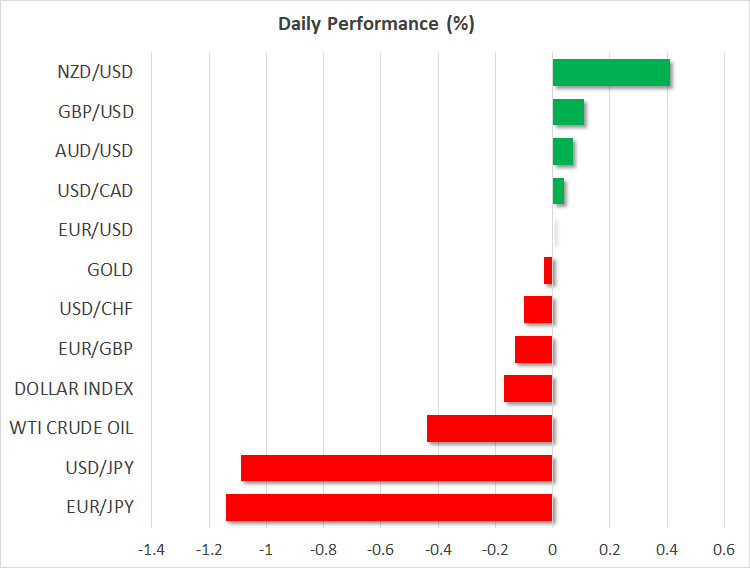 Treasury yields slipped sharply on Thursday, hitting multi-week lows, after closely watched gauges for the United States pointed to a slowing economy. The Fed’s favourite inflation tracker – the core PCE price index – rose by slightly less than expected on a month-on-month basis, while the ISM manufacturing PMI fell below the 50 level into contraction territory for the first time since May 2020.

The US dollar tumbled in response, brushing fresh 5-month lows today against a basket of currencies, as investors scaled back their expectations of a hawkish Fed. Markets have been in a buoyant mood since Wednesday when Fed Chair Powell backed the widely telegraphed view of his colleagues that it would be appropriate to slow down the pace of rate increases in December, saying he doesn’t want to “overtighten”.

However, markets appear to be ignoring Powell’s other message that there is still a “long way to go”, focusing squarely on the ISM’s prices paid component, which showed manufacturing prices falling at the fastest rate since the first Covid lockdown. Fed fund futures are now pricing in a terminal rate that is below 5%, even after Powell implicitly signalled that the Fed’s own forecast will be revised higher in the December dot plot.

Stocks struggle to extend gains, look to NFP for refuelling

This seems to be another case of markets setting themselves up for a fall. Fresh commentary from the Fed’s Williams and Barr yesterday suggests the policy stance has not altered after the soft set of data. With the Fed about to enter its blackout period before the next meeting, there’s now a greater risk of Powell toning up his hawkish rhetoric in his FOMC press briefing as he is unlikely to be too pleased about the extent of the declines in Treasury yields.

Having said that, the boost to equity markets already appears to have faded. The S&P 500 has hit resistance at its descending trendline, raising question marks about whether Wall Street will enjoy a Santa rally this year.

E-mini futures were last trading marginally in the red, weighing on Asian markets, and there were only a few gainers in Europe today. Japan’s Nikkei 225 index was one of the worst performers amid a more than 10% rally for the yen since the October trough of 151.94 per dollar.

All the attention later today though will be on the November jobs report due at 13:30 GMT, with the US economy expected to have added 200k jobs. After yesterday’s data, a big miss could spark a further rally in bond prices and more weakness for the dollar, with stocks possibly joining in the action this time.

As the Fed and other central banks prepare to slow down the pace of tightening, the Bank of Japan is only just getting started with hints about exiting its ultra-accommodative policy stance. One of the BoJ’s newest board members, Naoki Tamura, added fuel to speculation of a policy tweak earlier today by suggesting that it may soon be time to conduct a review of its policy framework. The Bank has often in the past announced major policy changes after such reviews.

The yen is currently testing the 134 level and is headed for weekly gains of 4%, as monetary policy divergence with the US finally moves in Japan’s favour.

The pound was another top performer on Thursday and is holding onto its gains around $1.2260 today, while the kiwi is the only major other than the yen that’s still advancing, after a jump in New Zealand import prices reinforced expectations that the RBNZ will stay hawkish for longer.

In commodities, meanwhile, worries that the US is headed for recession limited oil’s rebound after it was boosted from a Bloomberg survey showing OPEC fulfilled its pledge to cut output, which amounted to 1 million barrels a day in November. WTI oil futures were trading slightly above $81 a barrel on Friday, ahead of Sunday’s monthly output decision by the OPEC+ alliance.