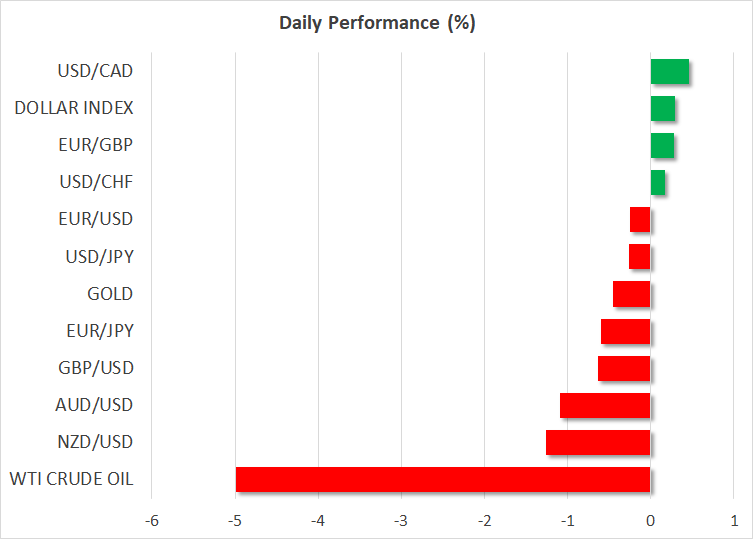 Worries about soaring inflation and stalling growth were weighing on the market mood again on Wednesday as an increasing number of investors, including high-profile names such as Elon Musk, upped their odds of the US economy entering a recession this year. Despite some signs that a peak in inflation could be just around the corner, there is growing scepticism about how quickly price pressures would abate after that and whether the Fed would be able to steer policy in a way that avoids a hard landing for the economy.

High inflation is also fast becoming a hot political issue in the United States as the White House is under pressure to mitigate the impact on households ahead of the midterm elections in November amid a slump in popularity with voters for both the President and the Democrats.

Oil prices on the slide again

President Biden will reportedly ask Congress later today to temporarily suspend the sales tax on gasoline to ease the squeeze on consumers. The White House is also pressing oil producers to boost supply and drive prices lower. Energy Secretary Jennifer Granholm is due to meet with US oil executives on Thursday. Moreover, Biden will travel to Saudi Arabia next month to likely convince the Kingdom to raise its crude output.

The latest efforts to tackle the surge in energy prices sparked a fresh selloff in oil futures on Wednesday, with WTI and Brent prices dropping to one-month lows.

Stocks back in the doldrums, Powell testimony eyed

However, equity traders didn’t seem to be too impressed by the White House’s response nor very convinced by oil’s latest slide. US stock futures were sharply lower as European trading got underway, suggesting that the two-day bounce will be cut short. Both the S&P 500 and Nasdaq 100 rallied by 2.5% on Tuesday, but their e-mini futures were pointing to losses of around 2% today.

Markets appear to be heading into Jay Powell’s congressional hearing with a lot of pessimism. Powell is set to deliver his semi-annual testimony on monetary policy before the Senate Banking Committee at 13:30 GMT.

Although the Fed chief is expected to repeat his resolve to bring inflation back down towards the central bank’s 2% target and likely keep the door open for a 75-basis-point rate hike in July, there’s a chance Powell will try to strike some kind of a balance by hinting that the pace of tightening could slow down later in the year.

That could potentially lift sentiment by the time US traders enter the scene, although caution around the outlook for the rate path is expected to remain high after Richmond Fed President Thomas Barkin became the latest policymaker to back a rate rise of 50 or 75 bps in July.

Safe havens back in demand, inflation data in focus

Treasury yields were nevertheless edging lower on Wednesday. There seems to be some correlation with yields and a decline in the US 10-year breakeven inflation rate over the past week, which in turn is strongly determined by energy prices. But safe-haven demand could also be pulling yields lower amid the heightened recession risks.

That is certainly the case in the currency market where the US dollar, Japanese yen and Swiss franc are all benefiting from today’s risk-off flows. The dollar index came close to hitting the 105 level earlier today but has eased-off from a fresh 24-year high of 136.71 against the yen.

The euro and pound slipped by 0.2% and 0.5% respectively, which compare favourably to the aussie’s and kiwi’s more than 1% plunge. The Canadian dollar also fell by a more moderate 0.5% ahead of the latest Canadian inflation print due later today.

Earlier in the session, UK inflation came in as expected, with the headline CPI rate inching up just 0.1 percentage point to 9.1% y/y in May. However, input prices continued to soar, suggesting CPI will accelerate again. There is growing speculation the Bank of England will soon be forced to join the 50-bps bandwagon.

View All
XM Research - 13 minutes ago