The Reserve Bank of New Zealand is widely anticipated to stay on its rate hike course on Wednesday when it announces its latest policy decision at 02:00 GMT. A 50-basis-point rate increase is fully priced in by the markets so what investors will be on the lookout for is any changes to the rate outlook amidst all the talk of a recession. There is no press conference scheduled for the July meeting and the RBNZ will not be publishing any new forecasts, so the focus will be entirely on the language of the statement. Any hints on the future rate path could be significant for the local dollar.Growth outlook is diminishing

Having pushed up the official cash rate (OCR) consecutively at every meeting since October last year, borrowing costs in New Zealand have already reached what the RBNZ considers to be a neutral level at 2.0%. The neutral rate of interest is the level thought to be neither contractionary nor expansionary for the economy. But as fears of a global recession run rampant, is the risk of one more pronounced in New Zealand?

After an initial swift and robust recovery from the pandemic, New Zealand’s economic growth has stalled since the second half of 2021. GDP unexpectedly declined by 0.2% q/q in the first three months of the year, mainly due to Omicron and softer exports, and although a rebound is likely in the second quarter, the outlook for the rest of 2022 is diminishing.

The RBNZ’s aggressive tightening of monetary policy, soaring inflation and weakening demand from New Zealand’s largest trading partners such as China are weighing on business sentiment. The NZIER business confidence index – a closely watched gauge – slumped in Q2 to the lowest since the height of the pandemic crisis in 2020. 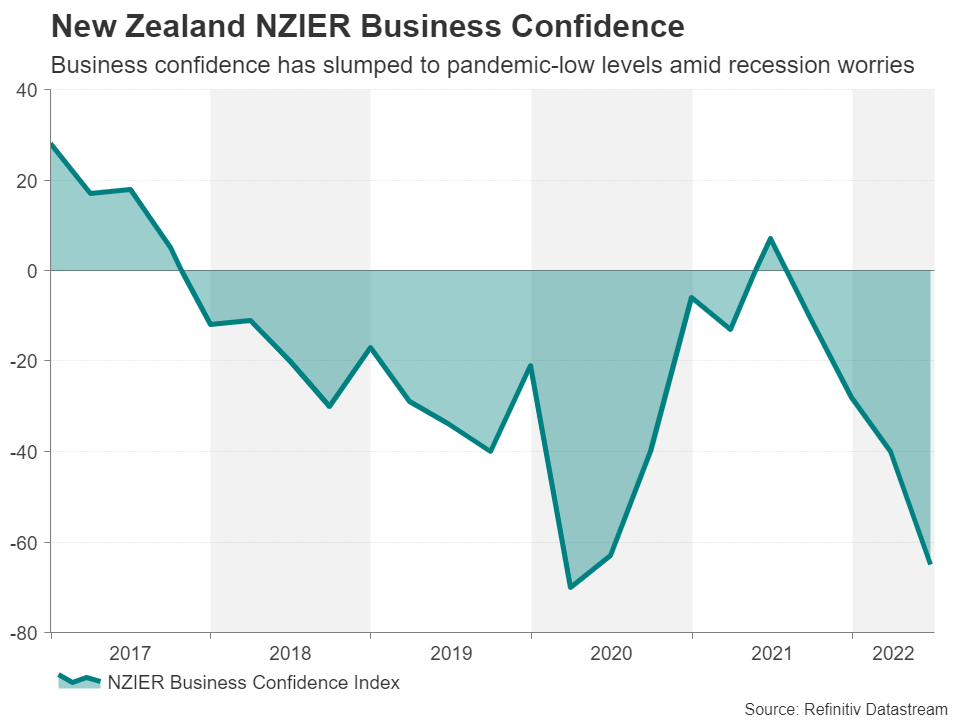 But as businesses face rising interest rates at a time when energy and other input costs are skyrocketing and the demand picture globally is faltering, the biggest impact of the RBNZ’s tightening blitz has been on the housing sector. The combined fiscal and monetary stimulus that was launched to support the economy during the lockdowns fuelled an already hot property market. But now that the stimulus has been withdrawn and the RBNZ is about to push rates into restrictive territory, house prices are sliding.

A downturn in the housing market

Whilst it’s true that New Zealand has an ongoing housing shortage and this will likely put a floor under prices at some point, the huge size of the property bubble means that the correction could nonetheless be quite steep. If house prices don’t stabilize soon, the effect of declining household wealth could knock consumer confidence further. A measure of consumer confidence by a Westpac survey fell to the lowest on record in the second quarter as households felt the squeeze from surging living costs.

The deteriorating backdrop has led investors to scale back their expectations of how high rates will go, shaving off about 50 basis points from futures markets. The question is, are policymakers at the RBNZ having a rethink too?

At its last meeting in May, the RBNZ predicted that the cash rate will peak sooner but at a higher level, forecasting a terminal rate of 3.95%. But before the latest repricing, investors were even more aggressive with their expectations and so the current market-implied path is now much better aligned with the RBNZ’s own guidance. Hence, the impact of all this on the New Zealand dollar has been minimal, and the currency has been trading mostly as a function of global risk sentiment. 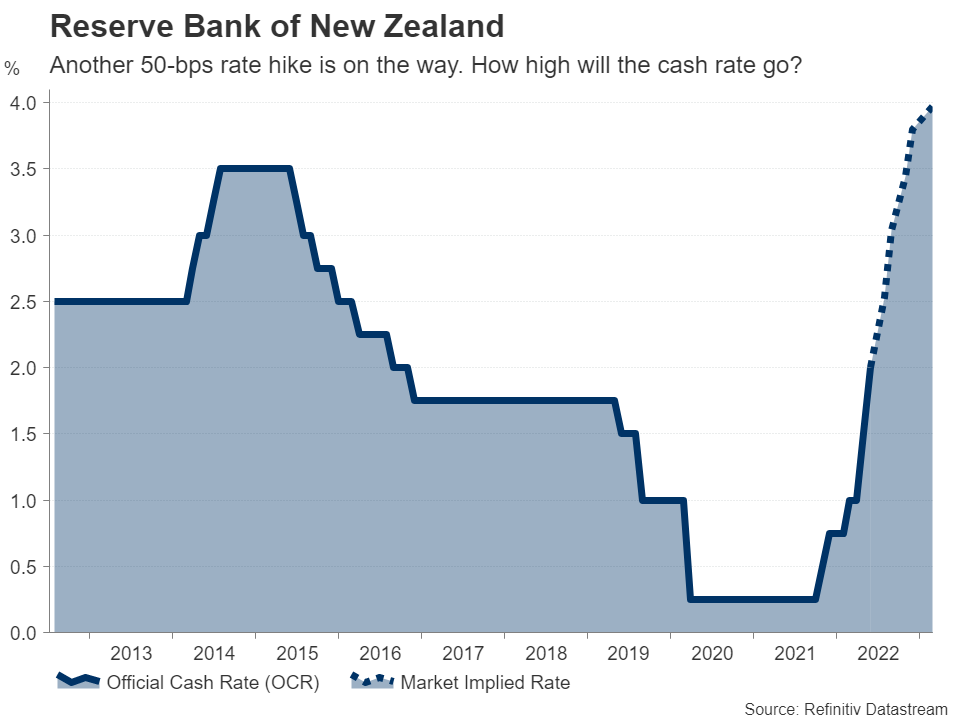 With inflation hitting a three-decade high of 6.9% in Q1, the RBNZ is unlikely to sound more cautious just yet, even as the economy might be entering a major storm. The next quarterly CPI data is due on July 18 and it could well have ramifications for the August policy decision.

Kiwi looking vulnerable after drop to $0.61

But for the meeting on Wednesday, the bank is highly likely to hike rates by 50 bps for the third time and maintain its hawkish tone. This could help the kiwi to steady above the $0.61 level, which it tested today for the first time in two years. If a hawkish statement coincides with an improvement in risk appetite, the kiwi could claw back above the $0.62 handle. However, a recovery towards the neutral setting of the 50-day moving average located slightly below the 61.8% Fibonacci retracement of the May-June upleg at $0.6352 seems some distance away.

In the event, though, that the RBNZ cites some elevated downside risks to growth, markets might interpret that as a dovish tilt. Renewed selling pressure could pull the kiwi down to the 161.8% Fibonacci extension of $0.5989 before the bears set their sights on the 200% Fibonacci of $0.5850.