The Bank of England is widely tipped to raise interest rates for the sixth straight meeting on Thursday (11:00 GMT). But there is a bit of uncertainty about the size of the hike as policymakers are considering stepping up the pace of rate increases to 50-basis-point increments as inflation continues to run wild in the UK. Market pundits have assigned about an 85% probability of a double hike, leaving the pound with little scope to extend its two-week rebound versus the US dollar if the BoE does not disappoint. This means that any signals about the future rate path as well as a likely decision on reducing the balance sheet will be just as important.Still eking out growth

There can be no doubt that UK growth hit a stumbling block in early Spring in the aftermath of Russia’s invasion of Ukraine. But despite all the doom-mongering, economic output has kept growing, just about. More importantly for the Bank of England, employment jumped by a staggering 296k in the three months to May, while there’s yet to be a collapse in consumer spending from the worsening cost of living crisis. 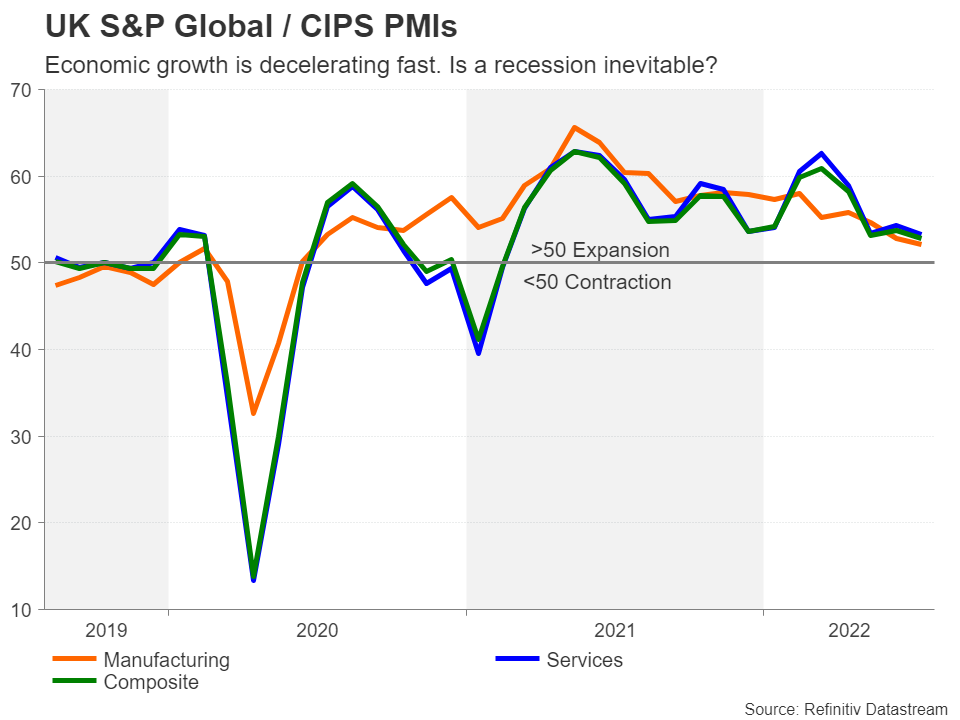 It's also undeniable, however, that the recession warning signs are clearly there and that the worst has yet to come. Manufacturing output declined in July for the first time since May 2020 according to S&P Global’s PMI survey and new orders fell too, even though the headline index held above the 50 level that separates contraction from expansion. Growth in the dominant services sector is also slowing and is mostly being propped up by the travel and leisure industries, whose boost will likely fade after the summer.

All this as inflation has continued to climb – the consumer price index hit a fresh 40-year high of 9.4% y/y in June. There are some indications that the build-up of price pressures is easing off and input costs may have peaked too, in line with the recent move lower in commodity prices. Although this hasn’t translated to a significant reduction in petrol prices across the UK, price cuts will probably gather pace soon. 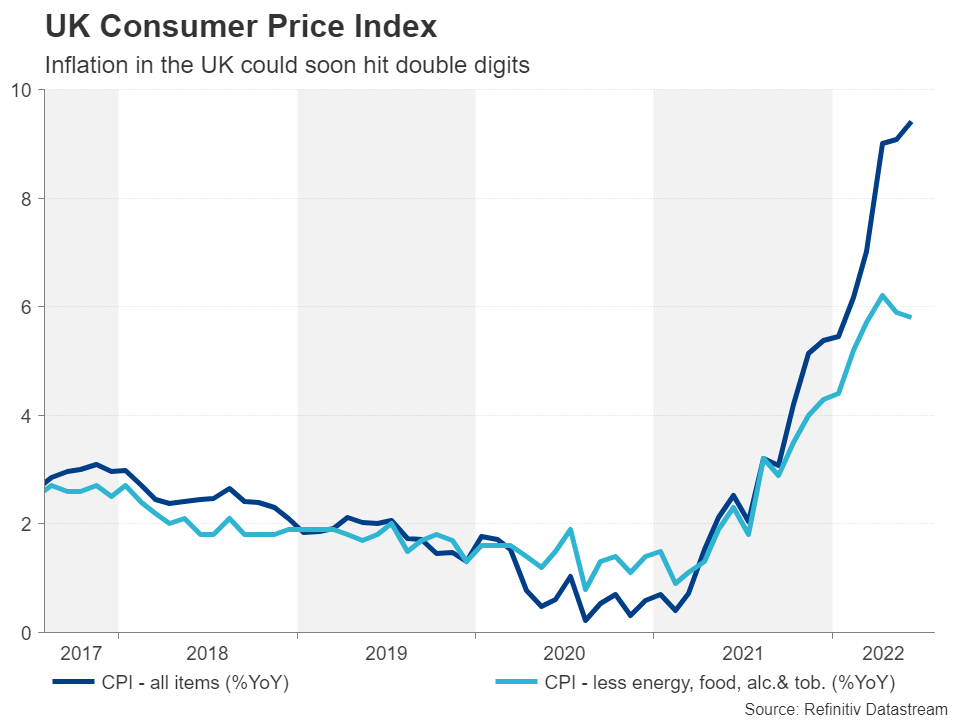 So why is the Bank of England thinking about going faster now, especially when inflation expectations have also started to cool off? Policymakers might still be worried about second-round effects, particularly as the tight labour market is getting even tighter and neither has there been a notable slowdown in the red-hot property market. They might also be having second thoughts about their overly cautious approach, as excluding the Bank of Japan, the BoE is now the only major central bank that has not raised rates by more than 25 basis points.

With the economy seemingly withstanding the fallout from the Ukraine war and the labour market coming out of it unscathed, the Bank may now be feeling compelled to hike more aggressively so it doesn’t fall further behind its global peers in the race to tighten monetary policy. There are other considerations too such as the possibility of further energy price shocks in the autumn or winter if Russia cuts off natural gas supplies to Europe completely, even if both oil and gas prices have steadied for now.

As the Bank tries to carefully balance its primary objective of containing inflation with sustaining economic growth, its updated quarterly projections in the Monetary Policy Report due the same day should reveal which way the risks are tilted.

Pound is eyeing a hawkish shift

Should the BoE meet expectations and raise the Bank Rate by 50 basis points, as well as revise up its CPI forecasts for the next 2-3 years, the pound could soon be testing the $1.25 level. If Governor Andrew Bailey ratchets up his hawkish rhetoric a notch further and goes as far as hinting that more 50-bps hikes are on the cards, sterling could revisit the top of $1.2666 scaled in May.

However, the interest rate setting is not the only decision the Bank will be making at its August meeting as policymakers will likely announce the active sale of UK government bonds, or gilts. Back in February, the Bank said it will cease reinvesting in maturing gilts but that it will not consider actively selling them until the Bank Rate has reached 1%, which it now has, although it did begin unwinding all its corporate bond holdings.

If the BoE does decide it’s time to start shrinking its bloated balance sheet more rapidly, this could cast doubt about the need for further action on interest rates. In such a scenario and in the absence of explicit signals about steeper rate rises, the pound would be at risk of breaching $1.20 again, a level underscored by the 20-day moving average.

In the bigger picture, however, BoE policy will likely play second fiddle to moves in the US dollar, which itself is being driven by expectations around Fed policy, as well as by broader risk appetite in the markets. Hence, a hawkish pivot by the BoE can only provide a meaningful boost to sterling if the dollar remains on the backfoot.