The European Central Bank is expected to embark on its first rate hike cycle in more than a decade on Thursday. The Bank will announce its decision at the new time of 12:15 GMT, followed by a press conference from President Christine Lagarde at 12:45 GMT. After years of ultra-accommodative policy, the long-awaited shift towards policy normalization has failed to spur significant bullish sentiment towards the flagging single currency, which last week had a brush with parity versus the US dollar. Is there anything the ECB can do to lift the euro’s long-term prospects?A 50-bps rate hike comes into play

Barely three weeks after the unprecedented pandemic stimulus has been finally wound down, the ECB is set to raise its three main lending rates on Thursday. The refinancing and marginal lending rates have been stuck at zero and 0.25 percent, respectively, since March 2016, while the deposit rate has been negative for the past eight years.

However, just days before the decision, the size of the first rate hike has been cast into doubt. Although policymakers had clearly telegraphed a 25-basis point increase, 50 bps is now apparently under consideration according to ECB sources. 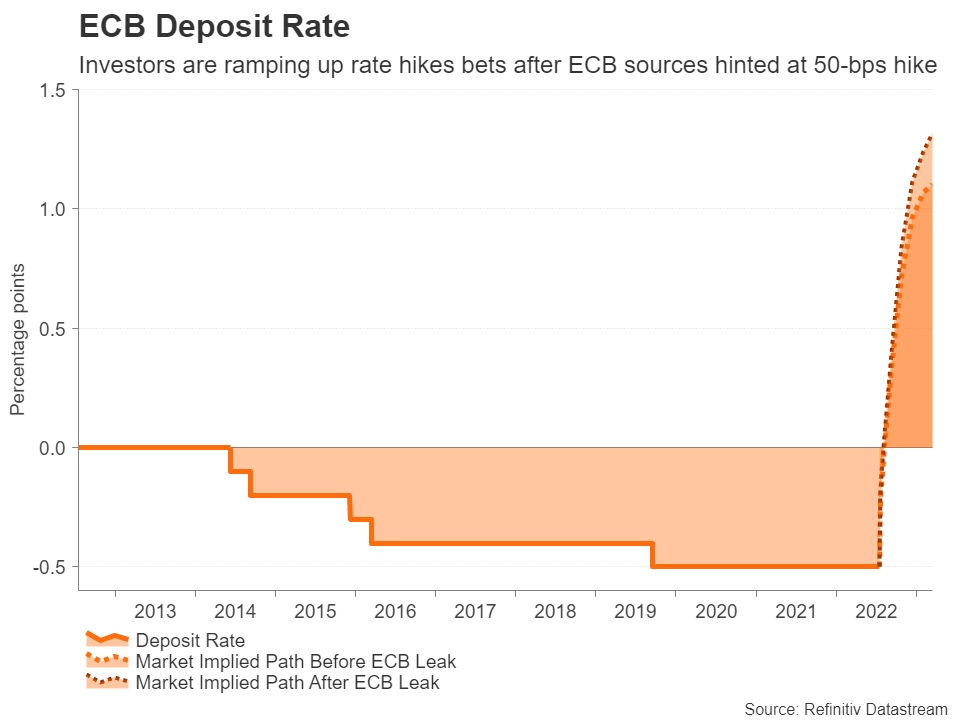 What the Governing Council ultimately decides will very much be the focus of attention for investors amid growing doubts about how high rates can go in the euro area when economic growth is decelerating at an alarming rate. The flash PMI estimates for July out on Friday are expected to show overall business activity expanded at the slowest pace since February 2021. 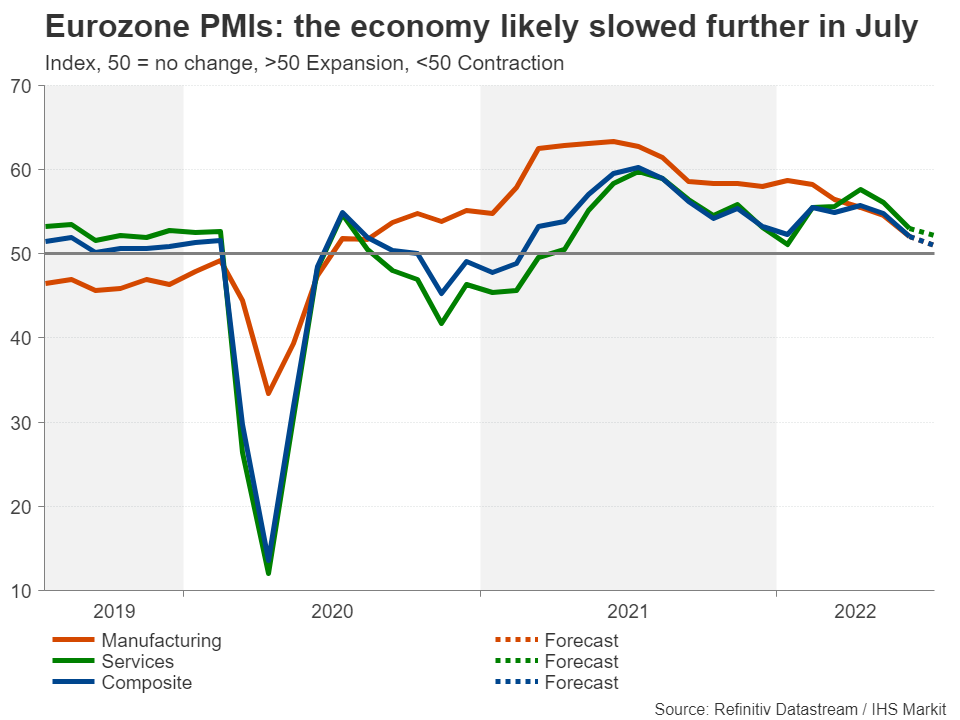 Worries that the Eurozone is headed for a recession have been exacerbated by the deepening energy crisis. Although there’s been some relief from the recent pullback in oil prices, Europe is facing the added threat of natural gas supplies being cut off by Russia. The main gas pipeline supplying Germany is currently closed for planned annual maintenance and fears are running high that Russia will not allow gas flows to resume when the works are scheduled to be completed on the same day as the ECB decision.

The problem is, when inflation has surged to a record high of 8.6% y/y, it will be hard for the ECB to factor in a steep German recession before it has actually happened. Another risk that will be difficult for policymakers to access is the renewed political turmoil in Italy. Prime Minister Mario Draghi – who has been a source of confidence during the country’s post-pandemic bout of political instability – could attempt to resign again on Wednesday if the row between the 5-Star Movement and its coalition partners isn’t resolved. 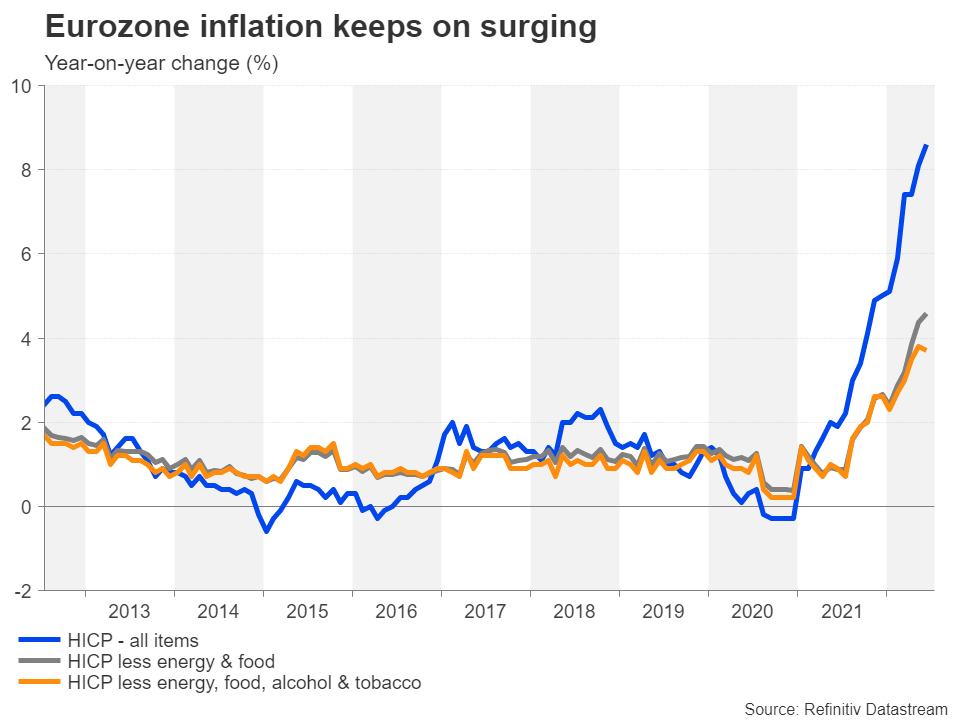 But the ECB may have something up its sleeve to prevent crises like the one in Italy right now from turning into a volatility episode in the markets. Widening spreads between core and peripheral bond yields has long been a concern for the ECB and is one of the reasons why policymakers were hesitant about withdrawing stimulus sooner.

Can anti-fragmentation tool boost the euro?

Back in June, the Bank said it will reinvest the redemptions from PEPP purchases flexibly, allocating a greater share of the reinvestments to member states that have higher spreads. However, markets were not impressed by the move and the ECB has since been in a rush to put together a new tool that would act as a safety net against fragmentation in Eurozone bond markets, with the aim of preventing unwarranted spikes in periphery yields.

If the ECB is able to pull a rabbit out of the hat, the euro might be able to stage a more sustained rally, extending its rebound against the US dollar. Having bounced off last week’s two-decade low of $0.9950 to test the $1.02 level, the euro could next aim for $1.03, which also happens to be the 123.6% Fibonacci extension of the June upleg, after which the 61.8% Fibonacci of $1.0455 would come into view.

The risk of sounding too hawkish

However, even if policymakers are able to allay concerns about a full-blown bond market panic, recession jitters won’t go away that easily, especially if they raise rates by 50 bps instead of 25 and signal that further large increments are likely in September and subsequent meetings. Any hawkish surprises that are translated into an aggressive rate path could roil investors.

For instance, if the ECB takes a leaf out of the Fed’s book and wants to show its resolve in containing inflation, it might not go down quite so well with the markets because of the underlying weakness of the Eurozone economy, not to mention the dangers Italy and Germany are facing at present. Hence, an overly hawkish tone might backfire and the euro could come under fresh selling pressure, tumbling back towards parity again.

It's also possible, though, that the ECB may not want to commit to the size and frequency of rate hikes beyond September, which would leave investors rummaging for clues in the latest staff projections and Lagarde’s press briefing. Under the circumstances, the latter may in fact be more effective at maintaining some upside pressure on the euro.