It’s proving to be a tough summer for the euro as a stronger US dollar and a more dovish ECB are overshadowing the Eurozone’s improving economic prospects. Aside from a growing monetary policy divergence with the United States, worries about the Delta variant are causing additional pain for the euro. Can Friday’s preliminary data on second quarter GDP growth and July inflation (both due at 09:00 GMT) provide any relief to the single currency?Annual GDP growth to hit double digits in Q2

Economic pointers for the euro area have been heading higher in recent weeks as a quickening vaccine rollout and the gradual lifting of virus restrictions have turbocharged the recovery, which stalled in Q4/Q1 when the economy went into a double-dip recession. Eurozone GDP is expected to have rebounded by 1.5% over the quarter to June, more than recovering from the 0.3% dip of the first quarter. 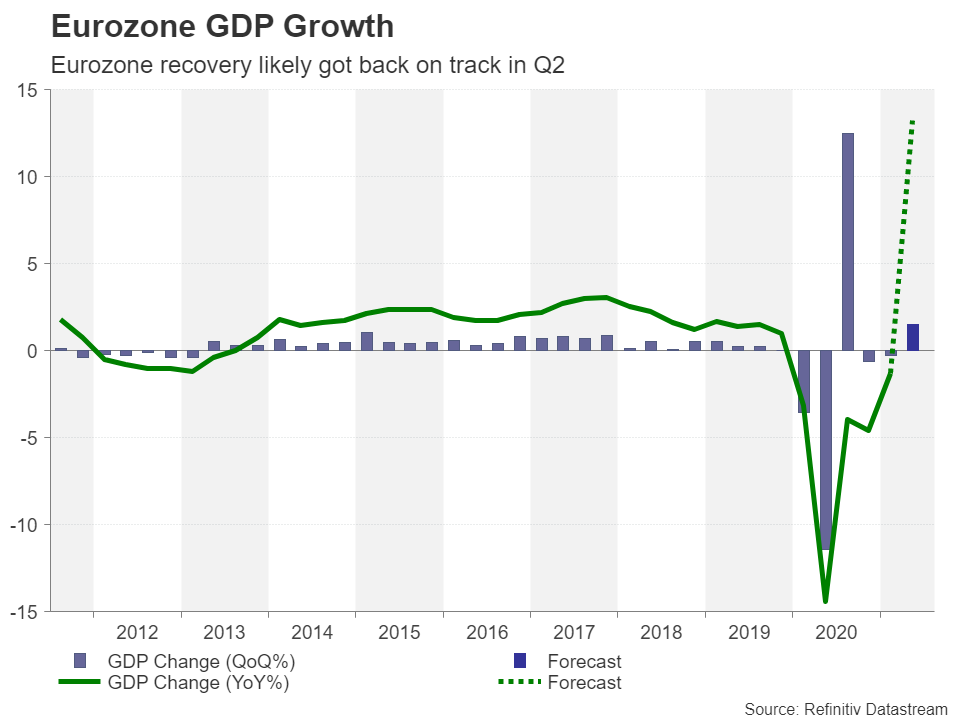 On a yearly basis, GDP is projected to stand 13.2% higher, boosted by the low base effect when economic output came to a standstill in Q2 2020. Looking at the flash PMI estimates for July, the positive growth momentum doesn’t seem to be ending anytime soon; IHS Markit’s composite PMI surged to the highest in 21 years.

Can the Delta variant scupper the recovery?

However, with virus curbs only just being relaxed again, there are already fears of another wave as the Delta variant is spreading rampantly in several countries across Europe. Cases have spiked sharply in Spain and the Netherlands and are on the rise in France and Italy too. The unwelcome development has already caught the attention of policymakers at the European Central Bank who no doubt will be keeping a close eye on whether the reopening of Eurozone economies is rolled back if the situation worsens.

But is the cloudier outlook the reason why the euro has had a dismal couple of months? Not quite. Virus woes have certainly been weighing on the euro lately, but the main source of the euro’s renewed weakness is the expectation that the monetary policy paths of the Fed and ECB will diverge even further in the coming years.

ECB gets serious about 2% inflation

After the Fed’s June policy meeting, investors brought forward the timeline of when they think rates in the US will begin to rise. But the divergence didn’t end there. When the ECB completed its monetary policy strategy review earlier this month, it doubled down on its commitment to achieving 2% inflation, which was followed up with a revamp of the forward guidance at the July meeting.

With inflation in the euro area running below target for most of the last decade and yet to explode higher from transitory factors like in the US, markets don’t see the ECB hiking rates for years to come. Preliminary readings for the Eurozone’s harmonised index of consumer prices for July are due on Friday and are expected to show headline inflation ticking back up to 2.0% year-on-year from 1.9% in May. That figure will likely rise further in the coming months. 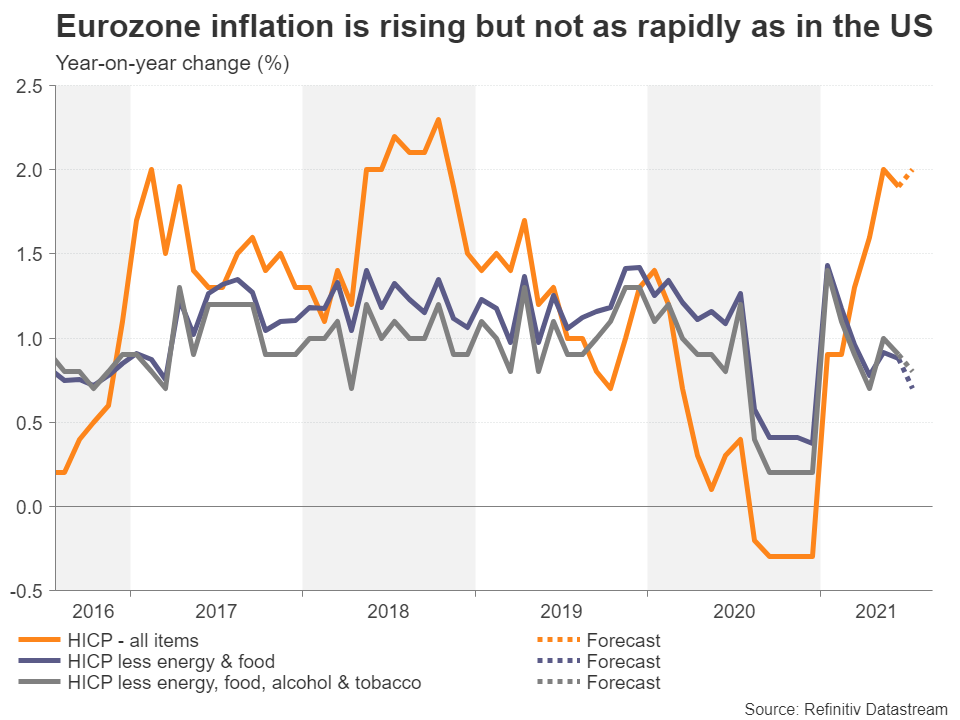 But that may not be enough for the ECB, which has gone a step further with its policy overhaul and incorporated underlying inflation into its forward guidance. Policymakers now want to see underlying inflation being “sufficiently advanced to be consistent with inflation stabilising at two per cent over the medium term”. At the moment, the two measures of core inflation stand at 0.9% y/y and are forecast to edge even lower in July.

This gives an idea as to how much progress is still needed on the inflation front as far as the ECB is concerned, in stark contrast to the Fed, which could begin tapering later this year and raise rates by the end of 2022.

Thus, it’s hard to see the euro being able to climb back towards its January and May peaks versus the dollar anytime soon. The recent bearish crossover of the 50- and 200-day moving averages underscores the negative shift in the pair’s medium-term outlook.

Any temporary boosts, either from stronger-than-expected data or a slump in the dollar could drive the pair towards the $1.1880 resistance, followed by the 50% Fibonacci retracement of April-May upleg just below the $1.20 handle. However, steeper gains would be difficult against the current backdrop.

To the downside, the $1.1750 and $1.1700 levels are the key supports that stand in the way of the latest downtrend becoming more permanent.