Following the risk-off impulse last week, the focus will turn to US CPI figures on Tuesday (12:30 GMT), industrial production (13:15) on Thursday and retail sales (12:30 GMT) on Friday as question marks remain about whether and how the Fed will start its bond tapering phase. However, unless big surprises happen, the data may not move the US dollar much.US covid situation stable despite latest pickup

US Covid infection cases inched to the highest level since mid-May last week, but the pace of growth remains overall anemic compared to the ones in previous outbreaks and those in Europe, keeping the US in an elevated position in investors’ eyes for now, although there is some timidity in going back to hard lockdowns in several countries.

The real question now is: will the Fed cut its pandemic-induced bond buying program under these conditions and signal a potential rate hike in the coming year or maintain a neutral stance for the sake of a responsible and safe monetary policy?

US CPI could slow down but hold elevated

Perhaps the answer cannot be found in inflation data at the moment. Despite the exponential rise in inflation measures, which under other circumstances would have immediately coaxed tightening actions, the Fed continues to believe that the boost in price growth is transitory and will fade once the base effects from the pandemic lows get out of the equation and supply chain issues get resolved.

Investors seem to have swallowed this narrative given the recent drop in inflation expectations, and perhaps they will remain patient until the start of Autumn when the pandemic effects largely drift into the past. However, if the acceleration proves something more than temporary thereafter, and supply chain troubles persist, the reflation trade may resurface, driving the dollar higher.

On Tuesday, the headline CPI figure is expected to tick lower to 4.9% y/y from 5.0% previously, while the core CPI, which excludes energy and food prices, is forecast to climb to 4.0% from 3.8%. The monthly changes are less distorted by base effects; therefore, the monthly gauge, which is said to have slowed down to 0.5% in June from 0.6% previously, may attract special attention.

Meanwhile, producer prices on Wednesday are expected to drop faster on a monthly basis, whereas the yearly number may hit the highest increase on record.

Investors’ expectations are one thing, and the Fed’s reaction is another. The central bank has successfully managed analysts’ calls for monetary tightening during the past few months, saying that the labor market is the priority even if inflation is heating. It also highlighted during its June policy meeting that interest rates will remain at current accommodative levels although divisions have widened within the Bank, with the number of policymakers projecting at least two rate hikes in the coming years rising significantly.

As regards the asset purchase program, however, last week’s FOMC meeting minutes messaged that conditions for reducing the bond purchase program would be met somewhat earlier than initially anticipated.

Of course, to get more confident on the above the economy will need to revive growth optimism in the coming months, but industrial production data and retail sales may provide little contribution to this story this week.

Particularly, industrial production data and the Philly Fed business index due on Thursday may instead reflect some stabilization in economic growth in Q2. On Friday, retail sales could report some recovery, but the rebound may not be strong enough to further brighten the economic outlook, leaving the gauge in a broader sideways move. Specifically, the consensus is for retail sales to have declined by 0.4% after falling by 1.3% in May while the core measure, which excludes autos, is said to have expanded by 0.4% following the -0.7% tumble in the previous month. 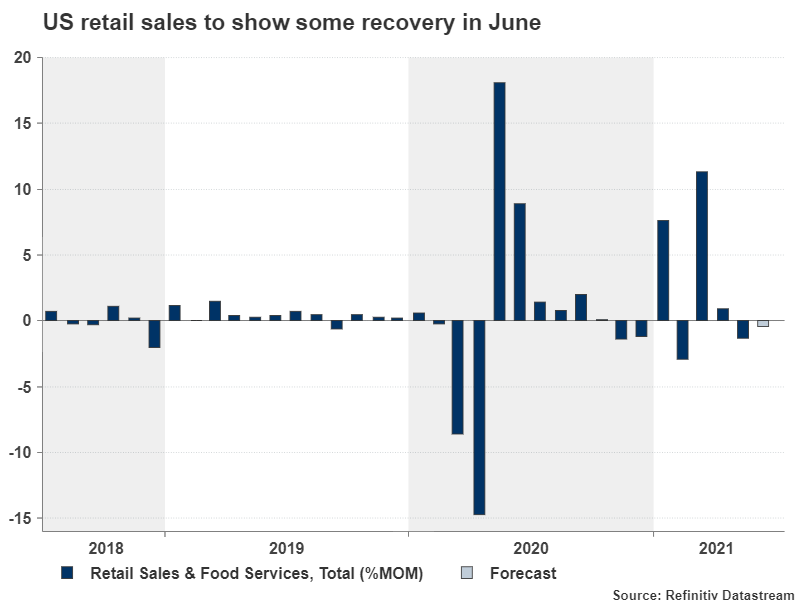 Turning to the US dollar, the currency could recoup some losses after two consecutive negative days, especially against the yen and the Swiss franc as last week’s risk-off mood cools down. Overall, however, the data could do little to change the Fed’s stance and hence boost the greenback, with the Jackson Hole Symposium in late August likely remaining the major event for any additional policy signals.

From a technical perspective, traders will be looking for a close above the broken supportive trendine at 110.65 and the previous barrier of 110.95 to raise buying orders towards the key 110.70 – 112.21 resistance zone from the peaks of 2020.

Otherwise, a decisive close below the 50-day simple moving average (SMA) at 109.82 may motivate fresh selling towards the 108.55 support region, while lower the door would open for the 107.80 region.