Will the Bank of Japan tweak its policy after yen’s freefall? – Forex News Preview

Investors will have their eyes on the Bank of Japan during Thursday’s policy meeting as the yen keeps melting while the inflation peak is nowhere in sight yet, making everyone wonder how long the central bank will remain an outlier. Besides a tweak in quarterly projections, however, policymakers may not move the needle, maintaining a super accommodative policy once again, and therefore leaving the yen under the US dollar’s command.

The freefall in the yen broke past 139.00 against the US dollar last week for the first time since 1998 in the wake of a hotter-than-expected US inflation report. The troubling data instantly stoked bets for an extraordinary 100 bps rate hike by the Fed following a similar shocking increase from the Bank of Canada, adding more fuel to the dollar rally. But Fed officials immediately played down that scenario, shifting the odds back to a 75bps rate hike for July, and therefore preventing the dollar from crawling up to 140.00.

Meanwhile, the BoJ is still stubbornly refusing to enter the tightening club, even though the ECB’s hawkish shift and the SNB’s surprise 50-bps rate increase last month put it out of sync with its global counterparts. Also, the latest commentary from BoJ's chief Kuroda during his quarterly meeting with the central bank’s branch managers last week, came as a reminder that there are no plans for a radical shift nor are there any plans to remove the option of a more stimulative policy from the table.

On the one hand, the BoJ faces no urgency to alter its strategy since the nationwide core CPI inflation, which was muted for more than a decade, has barely surpassed its 2.0% target in May, while a new update on Thursday is expected to reveal a slight increase to 2.2% in June. In addition, inflation expectations have deviated little from current CPI readings, moving only up to 2.4% in the second quarter.

Apparently, consumers may face higher prices in the coming months as imported goods prices surged at a record pace of 46.3% in June from a year earlier in the face of a sinking yen. Usually, Japanese businesses change price tags at the start of each quarter; therefore, July’s CPI release may experience a pickup given that the economy heavily depends on fuel imports, whose costs may not easily slow down because of the ongoing war in Ukraine. That would justify a pickup in the central bank’s inflation projections. 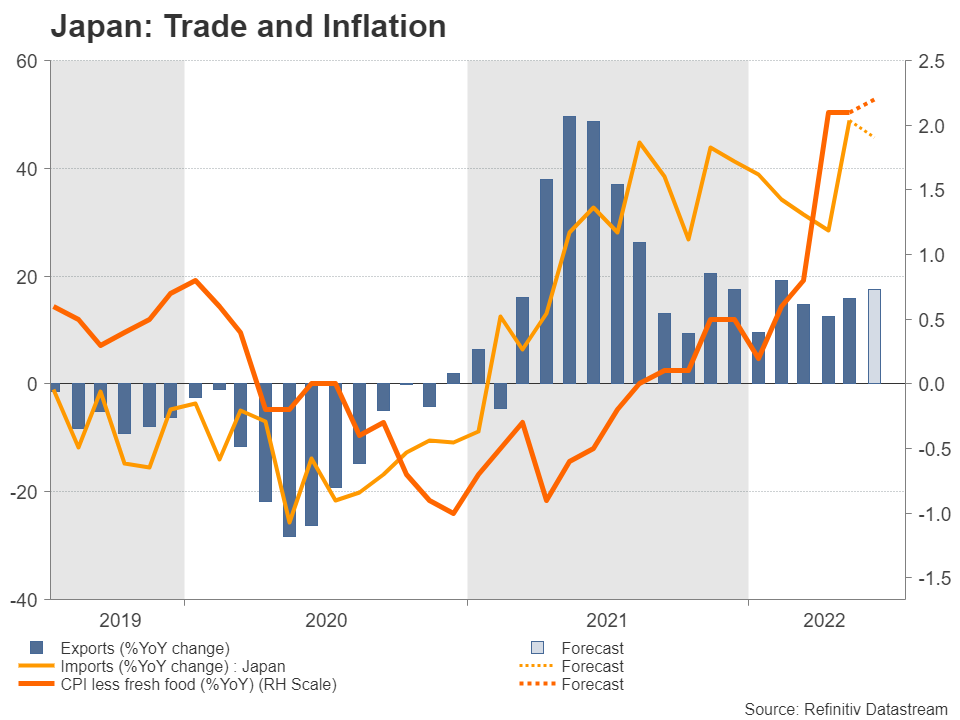 Other indicators are not hinting a swift change in policy either. The latest data releases for May have been rather gloomy, showing household spending tumbled for the third consecutive month, chip shortages (worsened from China’s lockdowns) weighed on car sales, and wage growth remained subdued.

Although constantly missing expectations over the past five months, exports kept growing at double digits in May, remaining the highest since 2018. Moreover, despite the depreciation in the yen over the previous months, imports expanded at the fastest pace since the 1980s, elevating the trade deficit to the highest since 2014. June's figures will probably show a stronger expansion in exports on Wednesday and a soft downturn in imports.

The yield curve control is becoming tougher to maintain as every time US rate expectations boost global bond yields, it forces the central bank to buy a bulk amount of Japanese government bonds, which it otherwise would not obtain. 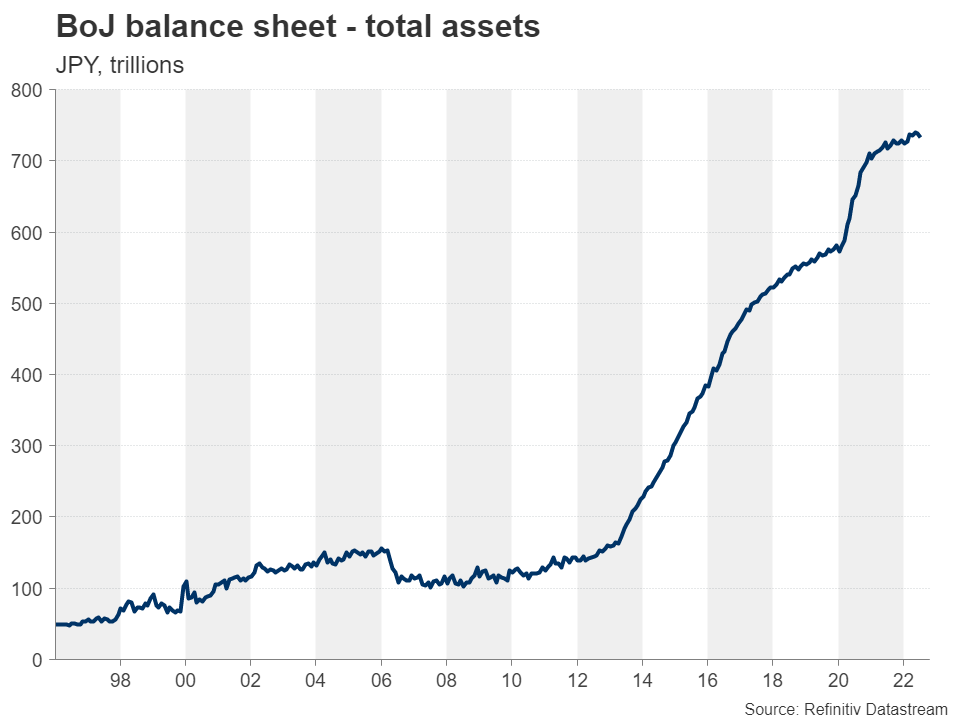 Nevertheless, with the economy still operating below its pre-pandemic levels and inflation not justifying an immediate policy response yet, the central bank is expected to stick to its guns for another month. Perhaps that will allow policymakers more time to assess recession risks and come to the yen’s rescue at a minimal cost. Hence, unless the tough yield curve control stresses the need for a shift, the only hawkish adjustment this week could be a switch to a more data-dependent approach. 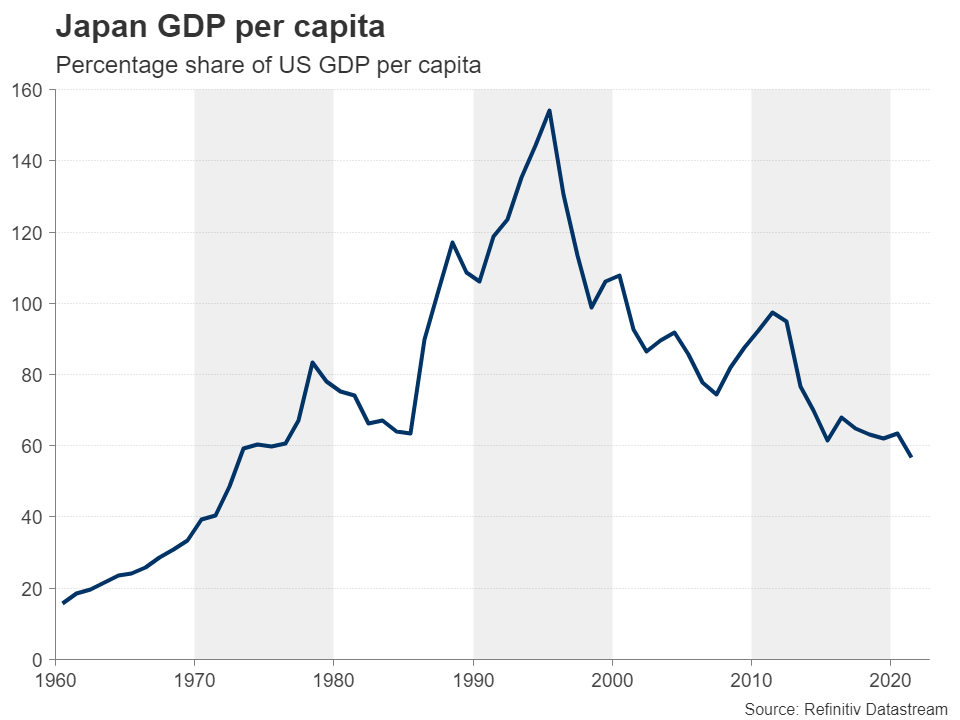 If the central bank places the future of its decade-long accommodative policy subject to data consideration, signaling a potential end to the stimulus era in the foreseeable future, dollar/yen may stretch this week’s decline towards its 20-day simple moving average (SMA) at 136.45. A steeper decline could pivot around the support trendline and the 50-day SMA at 133.00, keeping the broad uptrend intact.

Otherwise, if the BoJ repeats the same story and sentiment over the US economy becomes brighter, the 140.00 mark will come back under the spotlight near the resistance line. A step higher from here may target the 142.00 psychological mark.

Overall, the next few months could be critical. The devastating death of Abenomics’s father, who had still potent influence within the expansionary fiscal policy despite his resignation and was a firm supporter of Kuroda, could reduce commitment to ultra-loose policies. Although backing BoJ's policy thinking, the current prime minister, Fumio Kishida, has sought to distance himself from Abe’s economic legacy while gaining more popularity.