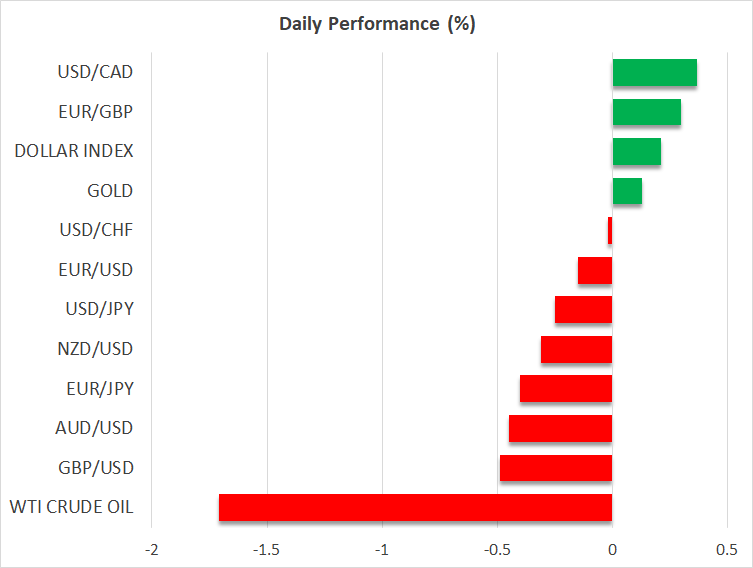 Fears of global contagion from the worsening crisis in China’s property sector continued to weigh heavily on sentiment at the start of trading on Monday as markets panicked about the possibility of Evergrande defaulting on its debt. Shares in the Chinese property giant plummeted again in Hong Kong on Monday, pulling the Hang Seng index to near one-year lows.

In Australia, the S&P/ASX 200 index closed down more than 2% as mining stocks were sold off on the growing threat of a collapse in Evergrande, which could push China’s already slowing construction industry into a full-blown crisis. Falling iron ore prices have been a drag on the Australian dollar for some time now and the risk of a further drop in Chinese demand for Australia’s major export doesn’t bode well for the currency’s outlook.

The aussie was last down almost 0.5% against its US counterpart, while the dollar index was up 0.2%, extending last week’s strong gains to a fresh four-week high.

The safe havens Japanese yen and Swiss franc were also firmer across the board on Monday as the prospect of Evergrande’s debt crisis becoming China’s ‘Lehman moment’ sparked a flight to safety.

While it’s so far unclear how contagious Evergrande’s possible collapse could be to the global economy and to what extent the Chinese government will try to bail out the world’s most indebted property developer, it’s certainly got Wall Street investors spooked.

The S&P 500 just posted its second straight week of declines and e-mini futures for the major US indices were pointing to losses of more than 1% at today’s open. European shares took an even bigger blow, with Germany’s China-exposed Xetra Dax last quoted down 2.25%.

The selloff could intensify on Wednesday when Chinese markets reopen after a long holiday weekend.

The gradual exit of central banks around the world from their emergency stimulus is likely exacerbating the risk-off trades from the China jitters. The US Federal Reserve will probably take another step towards tapering when it announces its latest policy decision on Wednesday, with FOMC members potentially bringing forward their rate hike predictions from 2023 to 2022.

Norway’s central bank could hike its policy rate as early as Thursday, while the Bank of England is expected to sound more hawkish when it too meets this Thursday.

However, the Bank’s notably more hawkish tone of late doesn’t appear to have done sterling any favours. The pound has slumped to a four-week low versus the US dollar, breaching the $1.37 support today following Friday’s shock drop in August retail sales.

Many traders have been paring back their bullish bets on the currency despite expectations of an earlier-than-anticipated rate hike by the BoE. There are worries that Brexit will make the labour shortages and supply constraints much more pronounced in the UK than in most other countries, which, although they will stoke inflation, they could also curtail growth. Hence, expectations are that even if the BoE does raise rates before the Fed, they won’t go up much after that.

The Canadian dollar was also on edge on Monday, weakening to around 1.2810 to the greenback as Canadians go to the polls today to elect a new government. The latest opinion polls suggest no party will be able to win a majority, with incumbent Prime Minister Justin Trudeau facing the prospect of a humiliating defeat. Should he manage to hold on to power, however, the loonie could get a significant lift.

US Open Note – Calm day ahead of busy week; oil around $85