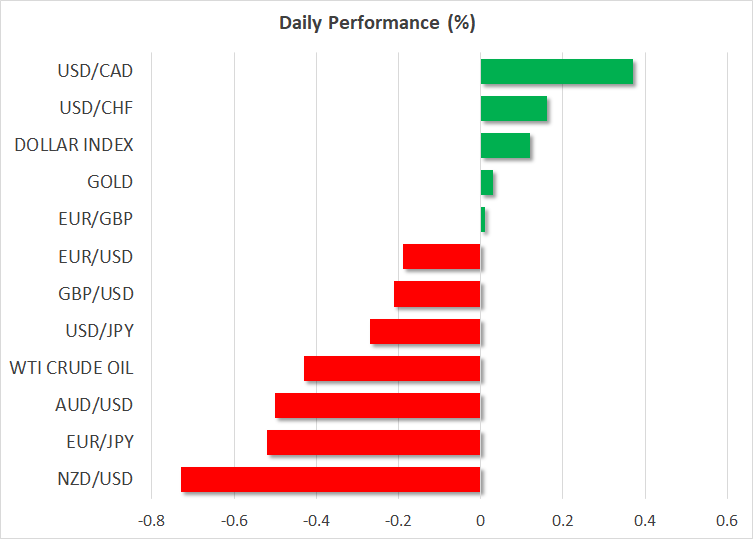 Stocks in China and Hong Kong plummeted for a third day on Tuesday as technology, real estate and for-profit education companies found themselves in the firing line of regulators. Chinese authorities’ latest crackdowns have rattled markets in the region, both by the speed and scale of the interventions.

The clampdowns seem to be driven mainly by concerns that these companies are pursuing business models that go against China’s socialist principles, such as Tencent’s exclusive music licencing deals, which were seen as anti-competitive, and the rising costs of tutoring by private education firms. However, there is a growing worry that regulators will not stop there and expand their crackdowns to other sectors.

China’s blue-chip CSI-300 index nosedived by 3.5% today, while Chinese companies listed in Hong Kong dragged the Hang Seng index down by almost 5%. But losses were limited outside of China and Hong Kong, with most Asian indices ending the session in positive territory.

However, European shares slipped at the open and US futures were in the red too. This could be an indication that the China selloff will not be confined to local markets for much longer. Though, for Wall Street, profit taking after two straight record sessions is a more plausible explanation for e-mini futures coming under pressure today.

Tesla reported better-than-expected earnings on Monday and the spotlight after today’s closing bell on Wall Street will go to Apple, Microsoft and Google parent Alphabet.

In the meantime, durable goods orders and the consumer confidence index will be watched out of the United States for signs that the growth momentum is holding amid rising infections in many parts of America due to the highly contagious Delta variant.

In the FX sphere, the US dollar was recouping some of yesterday’s losses, though in the short term, it is still consolidating from last week’s 3½-month high brushed against a basket of currencies. The safe-haven yen, which whipsawed last week as risk appetite bounced back, is gaining some positive traction today. This may be due to China-related jitters or could simply be down to some caution ahead of tomorrow’s FOMC meeting when the Fed is expected to signal that it is getting closer to withdrawing some of its massive stimulus.

But on the whole, there doesn't seem to be much concern about tomorrow’s meeting and investors’ main priority is to get some clarity on the Fed’s intentions on tapering. The biggest uncertainty is perhaps how Powell’s views on the economy might have changed because of the Delta outbreak. But even those anxieties have abated somewhat in recent days as investors have been encouraged by Britain’s improving virus trend.

Daily Covid infections in the UK fell for a sixth day on Monday, in a sign that the latest wave may have peaked and that vaccines alone can limit the spread of the virus. However, scientists are warning that the impact of the lifting of almost all virus curbs on July 19 has yet to be felt and it’s too early to jump to any conclusions.

Nevertheless, the pound’s rebound over the past week from the dollar’s onslaught has been the most impressive. Cable is testing the $1.38 level again, which is a key resistance area that needs to be broken if the recovery is to be sustained.

The euro, on the other hand, has barely budged from its lows, while the aussie’s and kiwi’s bounce back has only marginally been stronger. The loonie has fared somewhat better, aided by higher oil prices, which were up again today despite the weak risk-on sentiment and ongoing worries about the growth outlook.