Gold prices have staged a mighty recovery in recent weeks. The stars seem to have aligned for the yellow metal, with the Fed set to keep its foot heavy on the liquidity gas even as inflation accelerates over the summer. That could be the sweet spot for bullion as real yields and the dollar remain under pressure. However, the Fed will ultimately be forced to taper, so the endgame seems bearish.Tough first quarter

It has been a rocky year for gold. The world's oldest safe haven lost a lot of ground in the first quarter as global bond yields and the US dollar marched higher, but it has staged a real comeback in recent weeks.

Gold pays no interest to hold, so it usually suffers as bond yields move higher. If investors can get a decent return by buying safe US government bonds, buying gold that pays nothing isn't very attractive. The other variable in this equation is the dollar. Gold is typically priced in dollars, so when the dollar appreciates, it becomes more expensive for investors using foreign currencies to buy the metal, diminishing demand.

One way to think of this is that gold has an inverse relationship to bond yields and the dollar. If the US economy is doing well and investors expect the Fed to raise interest rates soon, the dollar and yields usually rally, which pushes gold lower. The opposite is true as well. 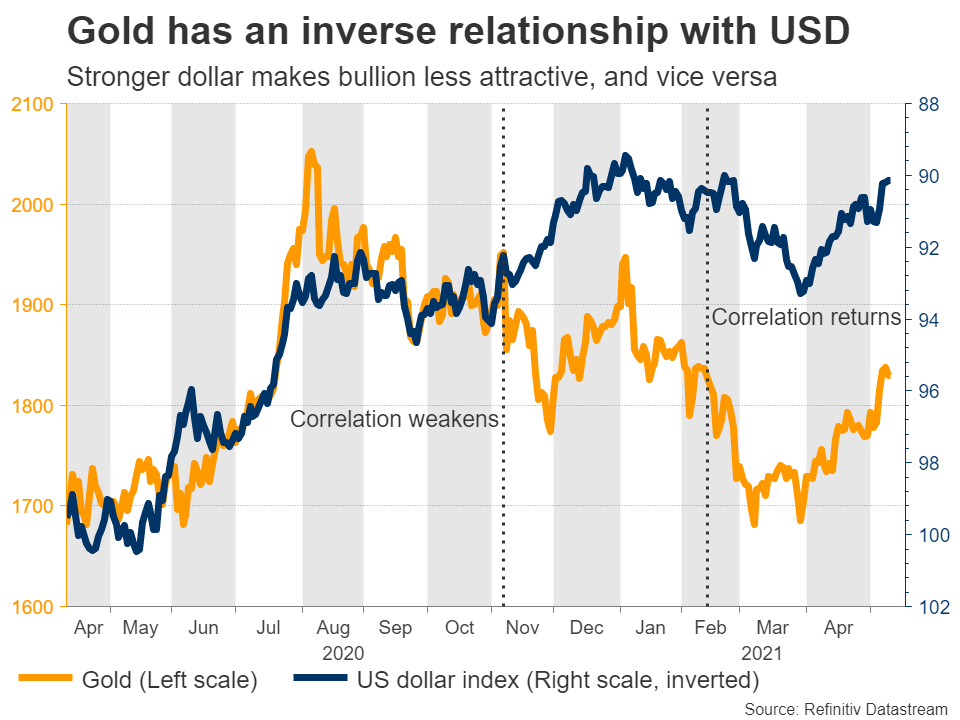 This was the story that tormented gold early in the year. The US vaccination program started firing on all cylinders while Congress unleashed a barrage of federal spending to heal the economy. The combination convinced investors that an inflation episode was imminent, which the Fed would respond to first by reducing its QE purchases and ultimately by raising interest rates.

But all that turned around in the second quarter after the Fed made it clear that it won't respond to rising inflation. The Fed argues that the factors pushing inflation higher aren't sustainable, so policy shouldn't react. It's a combination of booming commodity prices coupled with supply chain disruptions that is driving prices higher, and those usually fade quickly.

That's a fantastic outcome for gold. It means that we are about to experience a phase of higher inflation, which historically benefits bullion, but the world's most important central bank won't react for some time. This is a rare phenomenon. Central banks usually respond to inflation immediately – that is their job after all.

All this implies that the summer months could be a great period for bullion. With inflation accelerating but the Fed not turning the ship around, real yields could remain depressed at record lows. 'Real yields' mean nominal bond yields minus expected inflation. That is the single most important variable for gold. And with real yields depressed, the dollar may struggle too, adding more fuel for the yellow metal.

But will it last? Probably not

The party in gold may last until August or September, but after that, it's difficult to be optimistic. By then the US labor market will have hopefully made enough progress and it will be tough for the Fed to keep ignoring inflationary pressures. That's roughly when policymakers may announce that they will start 'thinking about' scaling back their asset purchase program.

The signal for markets would be that higher interest rates are on the horizon. That could propel the dollar and yields higher, and possibly sink gold. With cheap money finally being withdrawn and investors expecting higher rates, bullion could lose its shine permanently for this cycle.

In other words, gold prices seem set for one 'last hurrah' over the next few weeks, but the longer-term picture seems negative. The Fed can only close its eyes to inflation for so long.

Taking a technical look at gold prices, notice that the chart formed a double bottom pattern in March and then completed it with the break above $1755, a region that acted as support afterward. This validates the short-term positive outlook.

In case of further advances, the next region to provide resistance might be around $1875.

On the downside, if a Fed tapering announcement ultimately torpedoes bullion, preliminary support may be found near the $1800 handle, before a more fortified zone around $1755 comes into view.

View All
XM Research - 5 days ago