Riksbank set to exit negative rates, but will it be enough to sustain krona’s bullish run? – Forex News Preview

Thursday will be a busy day in the world of monetary policy as the Bank of Japan and Bank of England will be just some of the central banks who will be announcing their latest policy decisions. However, it will be Sweden’s central bank – the Riksbank – that could attract the most attention. Markets will be eagerly awaiting the Riksbank’s decision at 08:30 GMT to find out whether it has become the first central bank in the world to lift interest rates out of negative territory.

The Riksbank had little choice but to cut its repo rate below zero in early 2015 as inflation had been slipping in and out of negative territory since late 2012 and the European Central Bank’s own foray into negative rates threatened to put upward pressure on the exchange rate. Fast forward five years and the Riksbank’s experiment with negative rates appears to have worked: inflation has returned close to the Bank’s 2% target, growth has more than recovered from the financial and Eurozone crises and the jobless rate is comparatively low. 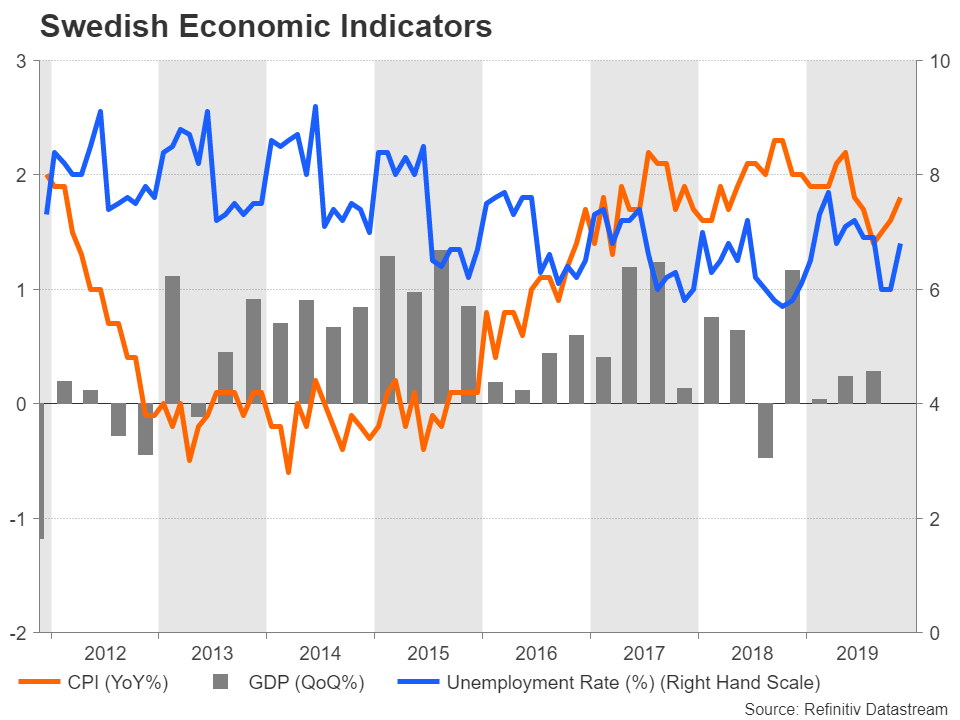 But one could argue that those objectives were met in 2017 and the Riksbank passed by the opportunity to normalize policy. So why is it in a hurry now to lift interest rates out of negative zone? In fact, the case for a rate cut has weakened, with Swedish economic indicators worsening in recent months. GDP growth has been sluggish during 2019 and headline inflation has moderated somewhat (though it does now appear to be trending up again). More worryingly, the country’s manufacturing PMI slumped to a 7-year low in November, falling sharply below 50 to 45.4.

The Riksbank’s timing suggests policymakers may see this as the last window of opportunity to raise the repo rate out of negative territory while things are still looking up (the data is OK, trade tensions are easing and Brexit could soon be resolved). It also indicates policymakers are becoming increasingly worried about the side-effects about a prolonged period of negative borrowing costs. Pressure has been piling on central banks by financial institutions about the damage to their profit margins from negative rates. In Sweden, other side-effects include soaring house prices and an extremely high private-sector debt level.

But has the Riksbank left its normalization plans too late and would taking rates out of negative territory now risk derailing the recovery in growth and inflation, especially if the rate hike was to significantly boost the Swedish krona? The krona has already appreciated sharply since October when the Riksbank unexpectedly signalled it plans to go ahead with an end of year rate hike. Euro/krona has fallen by more than 4% since the October meeting but whether the krona maintains its uptrend will depend on the Riksbank’s forecasts on the future rate path. 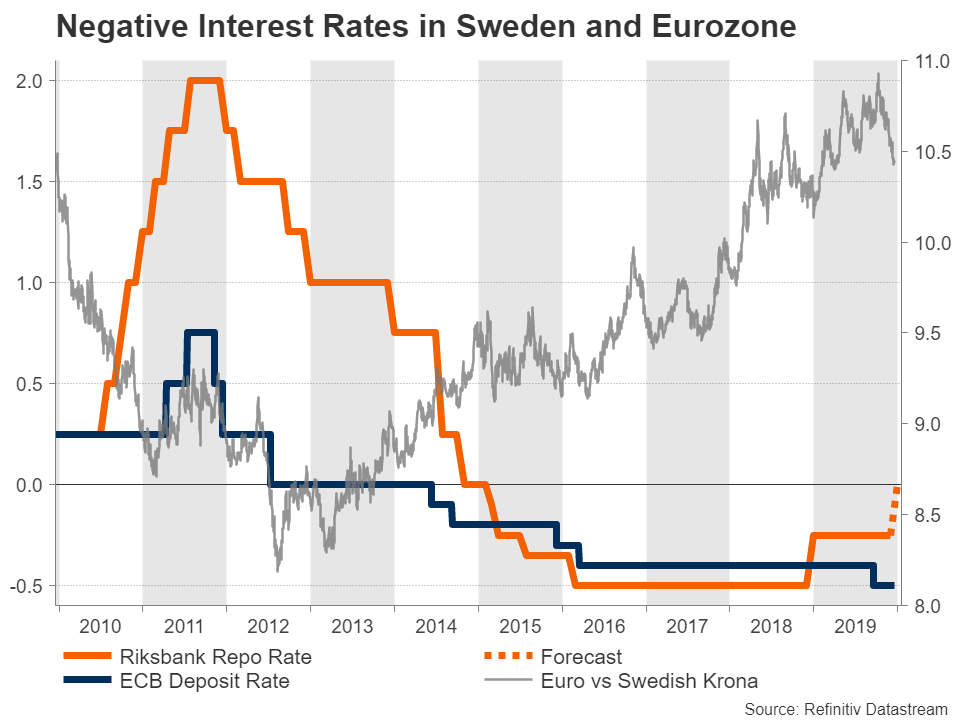 Does krona’s rally have more legs?

If as expected, the Bank on Thursday raises its repo rate from -0.25% to 0% but forecasts that it will stay on hold for the rest of the year, the krona’s rally could come to a halt. Euro/krona would then be able to maintain support around the 10.43 level, which is the 61.8% Fibonacci retracement of the upleg from December 2018 to October 2019.

At the last meeting, policymakers predicted that the repo rate won’t be raised again until at least the end of 2021. Although unlikely, but should the Riksbank bring forward its forecasts for the next rate hike, euro/krona could extend its losses until the 78.6% Fibonacci at 10.30.

Alternatively, a push back in the timing of lifting rates above zero would be seen by the markets as a dovish move and euro/krona could rebound towards its 200-day moving average, just above the 38.2% Fibonacci at 10.62.

If dovish forecasts fail to put a stop to the krona’s ascent, the Riksbank is unlikely to be too concerned about it just yet as the currency’s long-term decline versus the euro means its retracement has some way to go before raising policymakers’ eyebrows. In the meantime, policymakers at the European Central Bank, Swiss National Bank and Denmark’s central bank will be keeping a close watch at how smoothly Sweden’s exit from negative rates proceeds amid a growing number of critics against negative rate policy.