The New Zealand dollar registered five green weeks in a row against its US counterpart, ahead of the GDP report for the third quarter that is expected to back the upward direction in the currency on Wednesday at 21:45 GMT.

In November, the Reserve Bank of New Zealand surprised markets by holding interest rates steady at 1.0% instead of cutting them by 25 bps as analysts anticipated. The kiwi changed trajectory immediately to the upside as the RBNZ Governor also notified that there is no rush for further monetary easing after slashing rates twice so far this year.

Consequently, markets started to price in that the central bank may not take any action at least by the end of the first quarter of 2020, even though the government trimmed its growth forecasts for the aforementioned year.

On the one hand, a significant trade relief stemmed from the announced phase one US-China trade deal on Friday came as vindication to the RBNZ’s decision to hold pat, given New Zealand’s heavy exposure to foreign markets and its close trade ties with China. Theoretically, the preliminary agreement that cancels additional US tariffs, rolls back some of the existing ones, and forces China to buy a greater amount of American agricultural products for the next two years is projected to boost the sluggish business sentiment worldwide and bring some life to corporate activities including those in New Zealand.

On the other hand, Washington and Beijing have fought the battle but not the war. The trade saga is not over yet as the two sides are moving to  the second phase of negotiations, the structure of which has yet to be determined and which are likely to be more complicated since topics such as China’s theft of US intellectual property rights and Huawei’s turmoil will be discussed.

Hence the feeling of joy may not last for long or until the trade story hits another wall. Undoubtedly, policymakers are aware of the risks, but until a new drama potentially starts the central bank will turn attention to the inner economy that will objectively provide signals about whether further monetary stimulus is necessary. 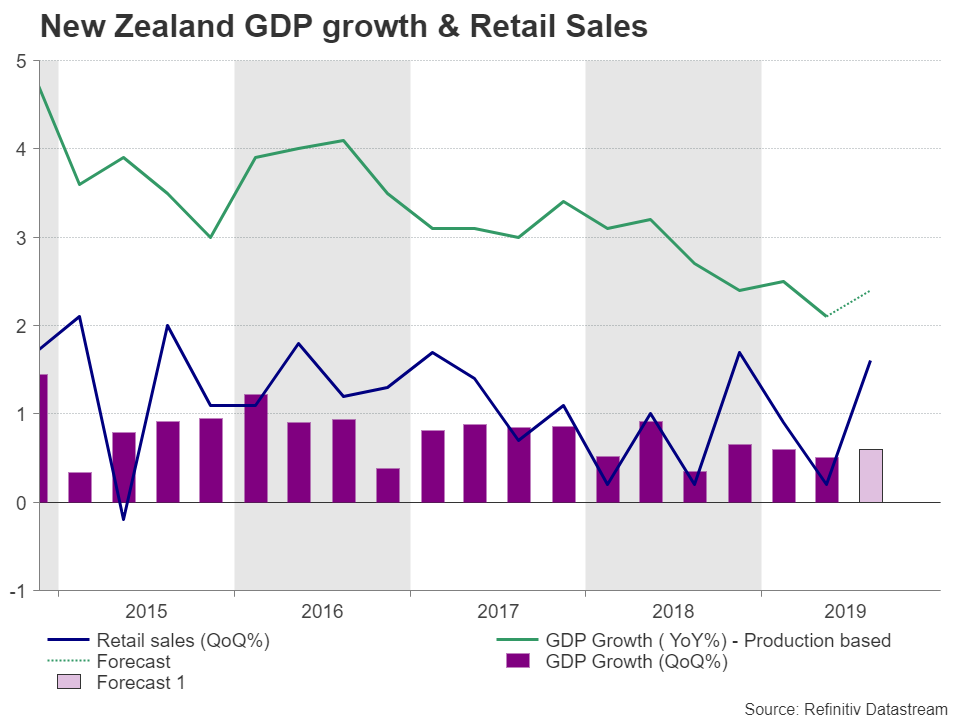 GDP growth to rebound in Q3

GDP growth figures for the third quarter will arrive just on time on Wednesday to direct rate expectations for the February policy meeting before the Christmas and New Year’s holidays. The data are forecast to show a stronger quarterly and annual expansion of 0.6% and 2.4% respectively versus 0.5% q/q and 2.1% y/y seen in Q2, which if materialized would reinforce views that the slowdown in the NZ economy may be nearing a bottom and therefore any additional rate cut may be further postponed. It is also worth noting that robust consumer spending reflected by the recent upbeat retail sales data in Q3 and encouraging housing figures have been taken as signs that economic activity has likely picked up before the end of the year. News that the government will spend NZ$12 billion on new infrastructure investment – the highest amount in 20 years – partly funded by new borrowing is more evidence that things could go better than worse for the New Zealand economy.  Yet, new infrastructure plans may take some time to take shape and probably not in early 2020.

All in all, with global risks fading but not evaporating yet, monetary strategy is expected to be data-depended in the near-term, with the RBNZ closely monitoring economic indicators that affect its dual mandate of price and employment stability. Recall that inflation was last seen at 1.5% y/y and below the 2.0% midpoint target, while the unemployment rate has rebounded to 4.2% from an eleven-year low of 3.9%.

Kiwi may find room for improvement

As for the market reaction, should GDP data show that economic slowdown is bottoming out before the end of the year, signalling at the same time that there is no immediate need for a more accommodative monetary policy, NZD/USD will probably run up to retest its recent high of 0.6634, where any break higher would bring the 0.6700 level into view.

Alternatively, GDP numbers should miss forecasts significantly to raise the minimal odds for a rate cut. Nevertheless, traders could keep in mind the 0.6520 area and then the 0.6440 support level in case NZD/USD extends lower.