The Swiss National Bank (SNB) will conclude its policy meeting at 07:30 GMT Thursday, and strangely enough, markets are pricing a 50% chance for a small rate cut. While some more stimulus would make sense, the SNB only has one ‘rate bullet’ left in the chamber so it might prefer to save it for a rainier day, especially now that the upward pressure on the franc has eased. In case policymakers indeed keep their rate powder dry, the franc could spike higher on the news.

From Europe with love

The world’s most infamous central bank – notorious for shocking financial markets back in 2015 – received a bit of good luck lately. It finally saw the upward pressure on the Swiss franc subside, as investors turned more optimistic on the Eurozone economy following the Franco-German proposal for an EU recovery fund.

The franc is considered a safe-haven currency, so when uncertainty overcomes the markets like in recent months, it tends to appreciate. However, a stronger currency is a headache both for Swiss exporters and for the nation’s inflation outlook, so the SNB regularly intervenes in the FX market to prevent the franc from appreciating too much.

Another way to make the franc less attractive would be to cut interest rates, but the SNB already boasts the lowest rates in the world at -0.75%. While it could theoretically cut that rate a little further, it probably has just one rate cut left in its arsenal. 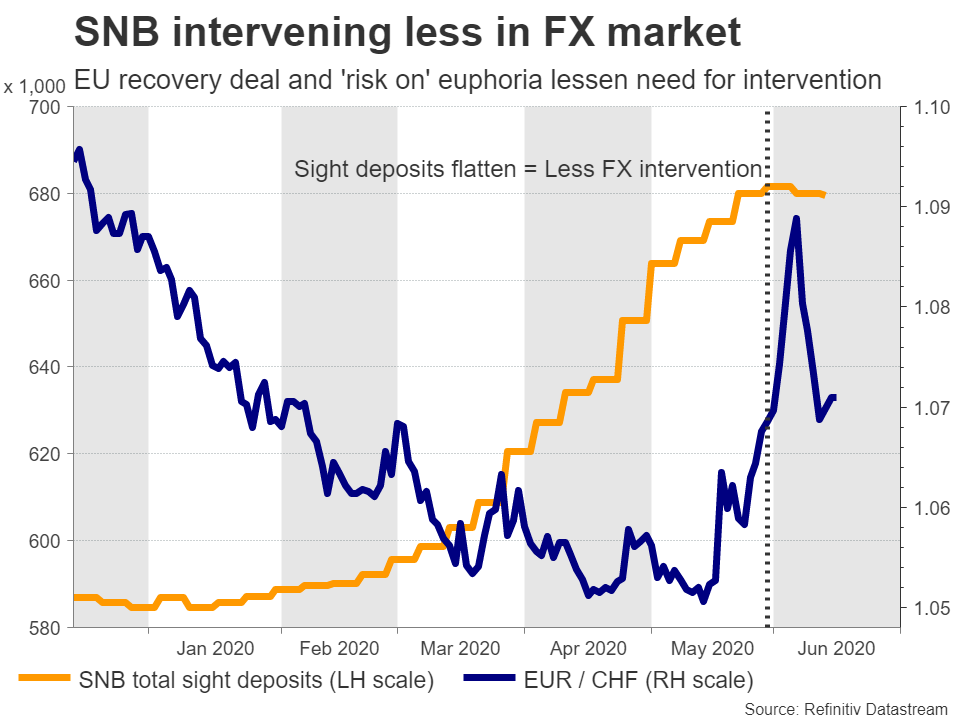 That’s why the news of an EU recovery fund was so important. With the euro getting its feet under it and global risk sentiment improving, the buying pressure on the franc has faded and so has the need for the SNB to cut rates further.

Markets not so sure

While there isn’t much rush for the SNB to act now, markets seem to disagree. Pricing derived from overnight index swaps suggests a 50% implied probability for a 10 basis point rate cut.

That does make some sense. The economy could surely use some more stimulus, and from a long-term standpoint, the fact that other central banks like the ECB have eased their policy without the SNB going down the same route implies more upward pressure on the franc over time.

However, this doesn’t look like the right time for the SNB to use its final rate bullet. The worst of the pandemic seems to have passed, financial markets are back on the mend, and the franc is in check. Furthermore, reducing rates any further would infuriate the nation’s commercial banks, which are already complaining that their industry is struggling precisely because of negative interest rates.

Why use your last remnants of firepower when the situation isn’t so desperate? Plus, what happens if another shock hits and you are all out of ammo?

Upside risks for franc on the decision?

All told, the SNB seems more likely to keep its policy unchanged for now, and simply strengthen its commitment to intervene aggressively in the FX market when needed. Since markets basically see the prospect of an immediate rate cut as a coin flip, that implies the franc could spike higher on the decision if policy is indeed left untouched.

Taking a technical look at euro/franc, initial support to further declines may be found near 1.0655. Even lower, if the 200-period simple moving average (SMA) near 1.0637 fails to hold, then the focus would turn to 1.0575.

Beyond the policy meeting itself, a lot may also depend on how Friday’s EU summit goes. A potential deal on the recovery fund among EU nations for example could see the euro strengthen, causing the franc to give back any SNB-related gains.

In this case, euro/franc could spike higher to challenge the 1.0770 zone again, where an upside break could open the door for 1.0820.