A raft of data is due out of the UK next week, but with key Brexit dates coming up in September and October, investors will likely ignore the usually closely watched indicators. Nevertheless, the releases may provide some near-term support for the battered pound, starting with jobs numbers on Tuesday, followed by inflation on Wednesday and retail sales on Thursday, all due at 08:30 GMT.

Although Britain’s labour market has cooled somewhat in recent months, as hiring has slowed amid the trade war and Brexit-related turmoil, wage growth has been ticking higher. Tuesday’s report is anticipated to reaffirm that trend. The unemployment rate is forecast to have stayed unchanged at 3.8% in the three months to June, while total weekly earnings are expected to have picked up some steam to rise to 3.7% year-on-year from 3.4%. 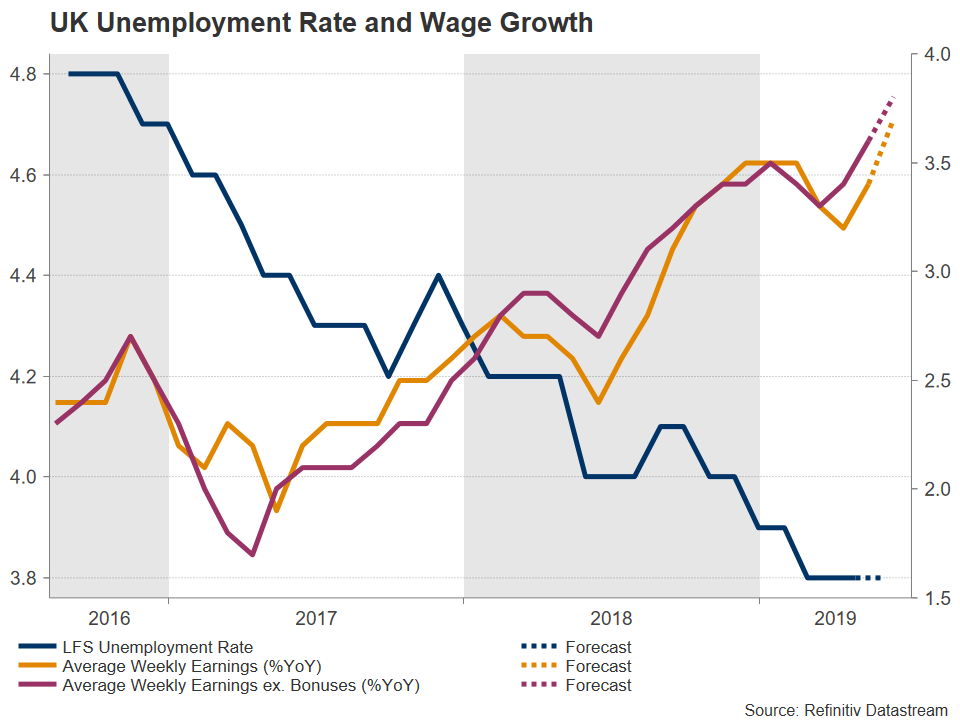 Traders will be paying the most attention to any surprises in the employment change and the wage growth figures. Unexpected weakness in the number of jobs created would signal a faltering economy, whereas a further acceleration in wage increases could dampen market bets of a Bank of England rate cut.

The UK’s headline inflation rate has been bang on the BoE’s 2% target in the previous two months but is forecast to have edged down to 1.9% in July. Core inflation, which excludes volatile items, is expected to stay unchanged at 1.8% y/y.

Despite an alarming deterioration in the global growth picture, the Bank of England is worried inflation may overshoot its target over the next 2-3 years given that the economy is running close to full capacity. But investors aren’t convinced by the BoE’s hawkish rhetoric, especially after this week’s shock Q2 GDP contraction, and are anticipating a quarter point rate cut by early next year. More specifically, unless CPI starts to deviate substantially from the target, the price data are unlikely to be a game changer for sterling in the coming months.

Retail sales jumped by 1% over the month in June, more than recouping two months of declines. However, UK consumers are expected to have turned more cautious in July and retail sales are forecast to have declined by 0.3% month-on-month. 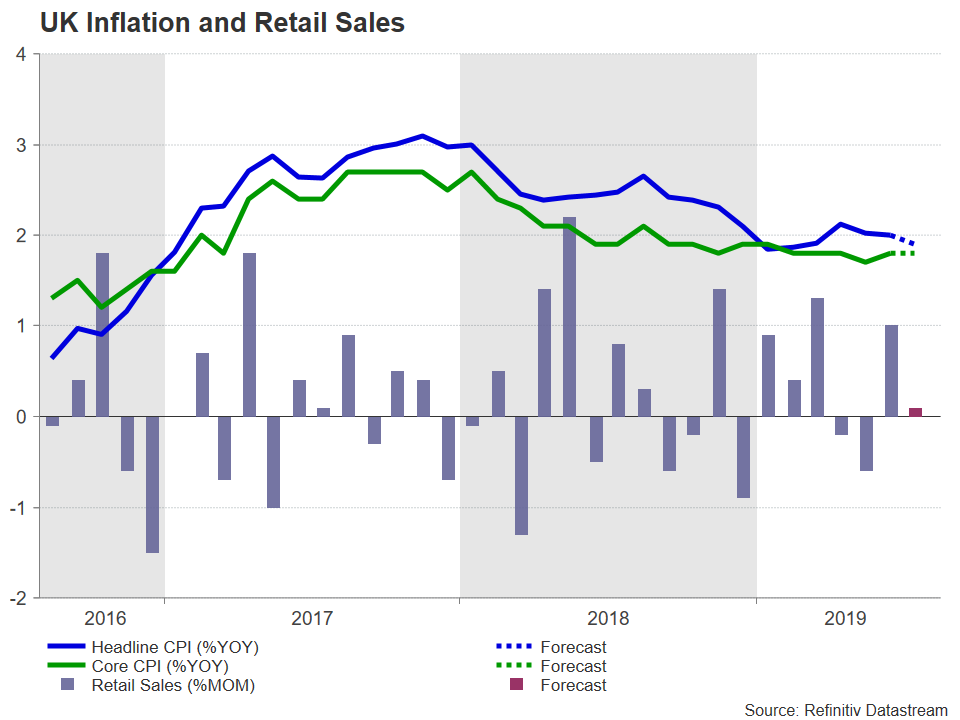 An even worse figure would raise concerns about the immediate growth outlook as British households have been the main driver of the economy over the past year as business spending has kept falling and exports have struggled amid weakening overseas demand.

Sterling to remain hostage to politics

But as the October 31 Brexit deadline fast approaches, next week’s data is likely to be nothing more than a passing interest for investors as everyone’s eyes will be on Westminster when MPs return from their summer recess on September 3. There is growing speculation that Britain could be headed for an early general election if, as expected, Labour calls for a vote of no confidence in the government. It’s also possible that Johnson could take the lead and call a snap vote himself. But there is a risk a new election may not take place before the October deadline, which means the vote might not be able to alter the outcome of Brexit.

All this leaves the pound vulnerable to more downside, and with cable slipping past the $1.21 handle and struggling to hold onto the 138.2% Fibonacci extension of the upleg from $1.2436 to $1.3383 at $1.2074, a convincing break below this mark would open the door to a new three-year low of $1.1850, which is the 161.8% Fibonacci extension. In the unlikely event though, that the UK and the EU signal their readiness to return to the negotiating table, the $1.22 level could be an easy target for pound bulls.