A raft of economic data is due out of the United Kingdom this week, starting with the labour market report on Tuesday and the consumer price index on Wednesday. Both will be released at the earlier than usual time of 06:00 GMT. Following last week’s dire GDP figures, traders should be braced for more depressing readings on the economy, with the March jobs numbers stealing the limelight early in the week. But as if things weren’t critical enough with the coronavirus pandemic spreading mayhem on the global economy, the UK also has to contend with Brexit, adding to the pound’s woes.

Trouble brewing in the labour market

Britain’s economy contracted by a quarterly rate of 2% in the March quarter, somewhat above consensus forecasts of a 2.5% decline. However, the better-than-expected figure was of little consolation as in March alone, GDP shrank by 5.8% – a record fall for one month, giving a taste of what’s to come in the second quarter. It also indicates Tuesday’s jobs stats will be equally gloomy as Britain went into lockdown in late March and the business shutdowns likely led to thousands of job losses as has been the case in many other countries.

Having weathered the Brexit turmoil and the global economic slowdown quite well, the UK’s robust labour market is starting to show signs of distress. The unemployment rate ticked up slightly just before COVID-19 broke loose in Europe, rising from a 4-decade low of 3.8% in December to 4.0% in February. But while that may still be enviably low, it could all change in March as the jobless rate is forecast to have jumped to 4.4%. Employment growth is projected to have stayed positive but to have slowed from 172k to 50k new jobs. 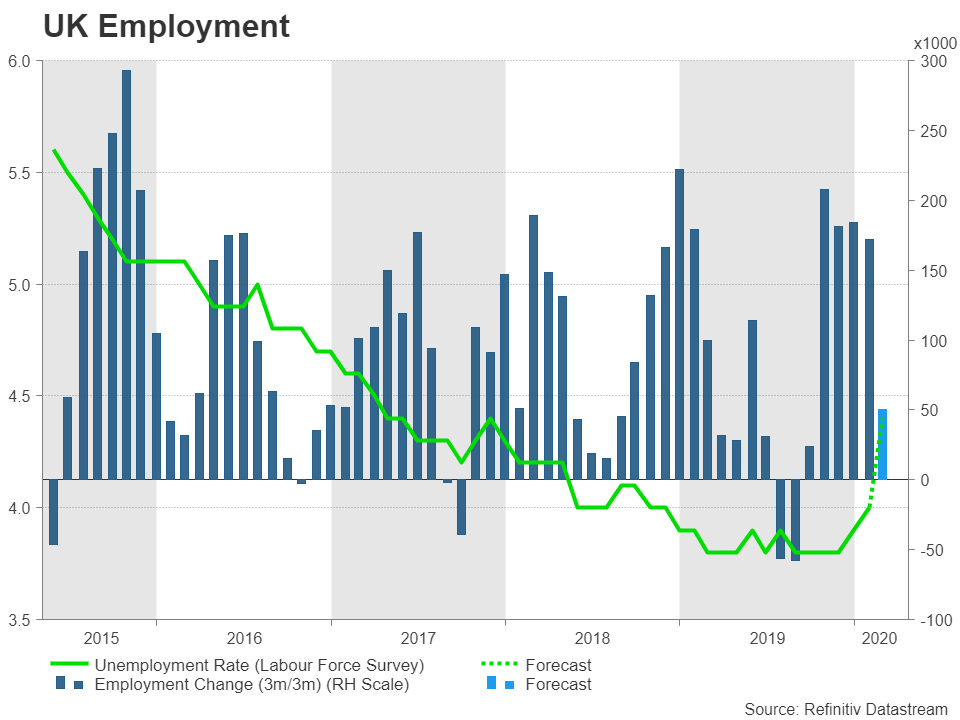 When factoring that both those figures are three-month averages, the true picture in March is bound to have been a lot worse than what the headline numbers are expected to suggest. That is why the usually discarded metric of the claimant count might attract more attention this time as it is one month ahead of the survey-based unemployment and employment measures. The number of people claiming unemployment benefits are forecast to have soared by 676,500 in April versus a 12,100 increase in March.

Wednesday’s inflation data are not anticipated to produce anything reassuring either. The consumer price index (CPI) likely moderated from 1.5% to 0.9% year-on-year in April as the combination of the oil crash and collapse in consumer demand dragged fuel and retail prices lower.

As for sterling, it has already been on the backfoot lately amid renewed doubts about whether the UK and the European Union will be able to reach a post-Brexit trade deal. Recent talks have made little progress to say the least and the UK has until the end of June to decide if it wants to extend the transition period beyond December 2020. But with little time left and Prime Minister Boris Johnson not budging on his ambition to have completely freed the UK of EU commitments by January 2021, the threat of no-deal Brexit is once again haunting the pound.

Another worry for investors is the surge in UK borrowing after the government completely abandoned its austerity drive to go all out to help British businesses and workers during the pandemic. The pound is therefore likely to be sensitive to any disappointing data given the amplified Brexit and deficit risks.

Too many dark clouds hanging over pound

A negative reaction would easily push pound/dollar below immediate support at the 38.2% Fibonacci retracement of the March sell-off at 1.2090, setting the stage for the 23.6% Fibonacci of 1.1828. On the upside, the 1.23 level is the main target as it doubles as both the 50% Fibonacci and the 50-day moving average.

However, without significant progress on the Brexit front or signs that Johnson’s virus policy is starting to have some success, there is not a lot to be optimistic about the pound in the near to medium term. Even a better-than-expected jobs report might fail to make much impact on sterling as only a modest rise in unemployment would probably signify that employers are fully taking advantage of the government’s furlough scheme, which subsidizes wages in return for keeping employees on the payroll, than the economy coping well under the virus strain. While this would enable a quicker bounce in the jobs markets once a recovery gets underway, it would also overburden the state, meaning potentially a tighter fiscal policy in the future.