Economic data out of the United Kingdom this week is expected to show the recovery gathered pace after the lifting of more lockdown restrictions in June and July. June retail sales figures are due on Friday at 06:00 GMT and will be followed by the flash PMI prints for July at 08:30 GMT. Upbeat numbers could bolster the pound’s advances, having bounced to the $1.27 region in the last few sessions. But Brexit woes risk spoiling cable’s mini rally amid reports the face-to-face talks between UK and EU negotiators taking place in London this week are not going well.

Gross domestic product (GDP) rebounded by a disappointing 1.8% in May, barely recouping the 20% plunge recorded in April. But the slow recovery was mainly down to the fact that despite a mild easing of the lockdown in May, most stores stayed shut and the majority of Brits remained confined to their homes.

But June marked a turnaround in the UK’s fight against the coronavirus, both on the health front and economically. The daily rate of new infections started averaging below 1,000, allowing the government to proceed with the next phases of the lockdown relaxation. Crucially, this has meant that non-essential stores were given the green light to reopen on June 15. A further major lifting of social distancing rules followed on July 4 when pubs, restaurants, hair salons and leisure centres were permitted to open their doors. 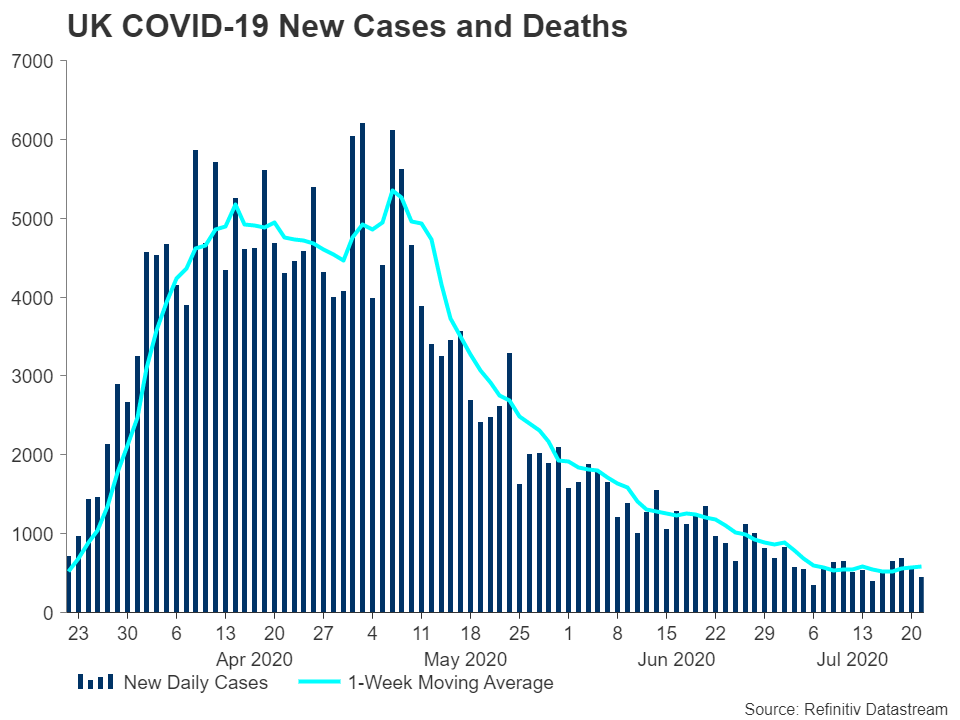 Private consumption is the biggest component of UK GDP, accounting for about two thirds of economic output, so the latest measures to restore some normality amidst the pandemic should provide a much-needed boost to growth. If the forecasts for the incoming data is to be trusted, that is indeed what is happening. 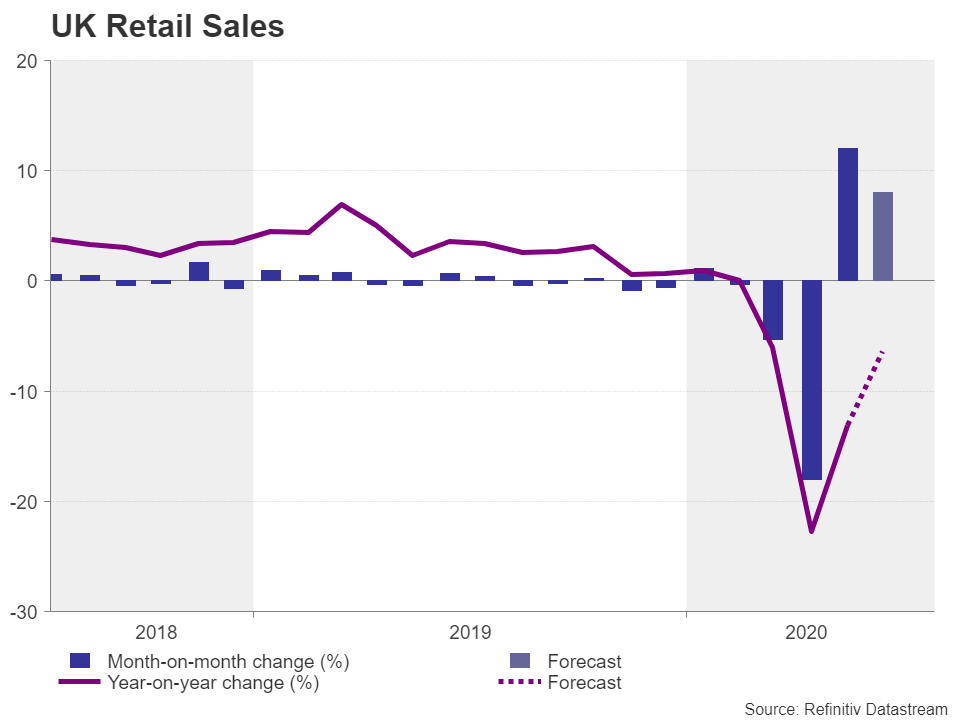 Retail sales are expected to have jumped by 8% month-on-month in June, adding to the prior month’s 12% gain. This would narrow the year-on-year decline to 6.4%, having bottomed at -22.7% in April.

A further indication of a healing economy should come from the IHS Markit/CIPS PMIs. The recovery in manufacturing activity likely accelerated in July, with the PMI rising to 52.0 in the preliminary reading. More significantly, the services PMI – the dominant sector of the UK economy – is forecast to have climbed to 51.5 from 47.1, signalling a return to growth in July. 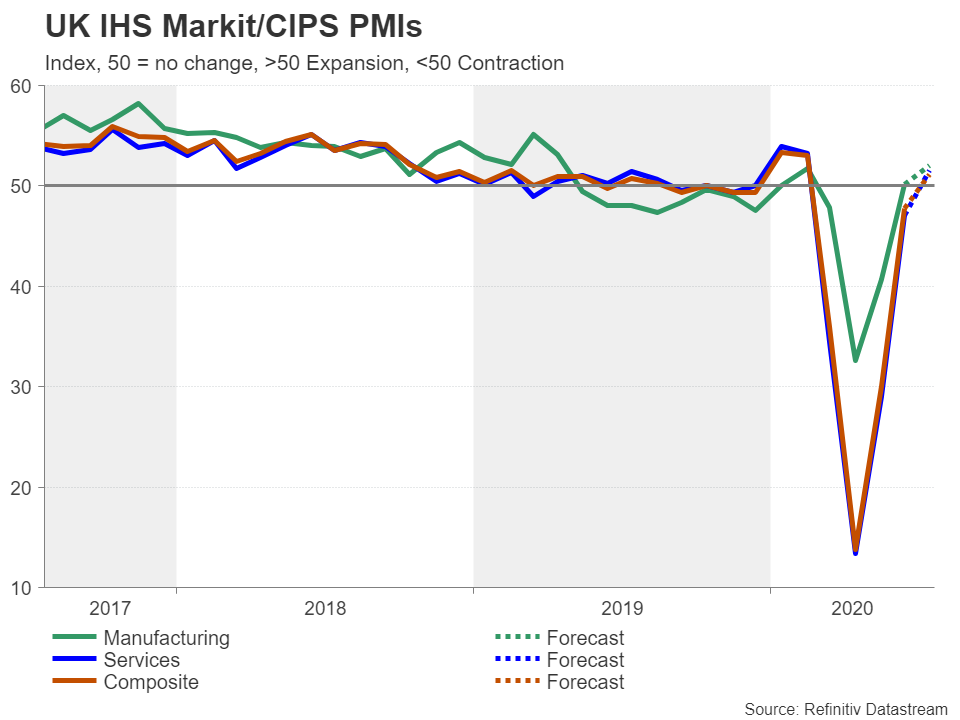 Pound’s gains may struggle to stretch beyond $1.28

If Friday’s data reassures investors that growth moved up a gear during June/July, the pound could attract enough buyers to push it up towards the 78.6% Fibonacci retracement of the March downtrend at $1.2815. Above this point, the $1.30 handle would be the next major target for the bulls.

However, traders will likely be cautious in testing the waters above the $1.28 level until they can be more certain that the UK recovery is on a solid footing. Having left the European Union and Boris Johnson’s government loosening the fiscal purse strings substantially to cushion the virus blow, the UK economy is more exposed than ever to global downside risks.

UK ready to walk away from Brexit talks

Hence, striking a good post-Brexit trade deal with the EU has never been more important. Yet, all the signs are that the British government is ready to walk away from the talks. A report by the Daily Telegraph suggests this week’s talks between the UK’s David Frost and the EU’s Michel Barnier have not made any progress and the government is working on the assumption that “there won’t be a deal”.

Johnson had been hoping that the two sides would agree to an outline of a deal by July. But that is looking increasingly unlikely, and at this point, a basic trade agreement by the Autumn is the more probable outcome.

Nevertheless, markets don’t appear to be too concerned just yet. Maybe because the EU’s drawn-out summit on the virus rescue package was a reminder that everything is always agreed at the 11th hour. Still, the pound remains vulnerable to short-term selling, with the $1.25 area that encompasses the 61.8% Fibonacci of $1.2513 and the 50-day moving average at $1.2471 being the first port of call to the south. Steeper losses would bring into scope the 50% Fibonacci of $1.2302.