Markets will place an extra weight on employment readings and GDP growth figures out of the UK on Tuesday (08:30 GMT) and Wednesday (06:00 GMT) respectively after the Bank of England showed concerns of a rising unemployment rate at its previous week’s policy meeting but reiterated that the economy has a more rapid recovery than it initially projected. With the pound having erased some of its gains on the back of a stronger dollar on Friday, the data should significanty suprise to the upside to help the pair retest its  recent peaks. Yet, the reaction is expected to be short-lived.

UK to confirm the worst recession in a century, monthly figures in focus

Two consecutive quarters of negative output is the definition of a technical recession and what the UK economy is highly expected to confirm this week. According to forecasts, the country experienced its sharpest downfall in a century in Q2 and the worst in Europe, shrinking by 22.5% year-on-year after contracting by 1.8% in Q1. However, since the lockdown loosening took effect in June, figures for the corresponding month could attract greater attention as markets are looking for a proof of a steeper GDP advance following the BoE’s upbeat short-term assessment. Retail sales and business PMI surveys increased at pre-pandemic rates in June, providing a partial snapshot of improving economic conditions, though the full magnitude of growth will be reflected in the monthly GDP data which are anticipated to expand at a faster record pace of 8.0% compared to the 1.8% increase in May. 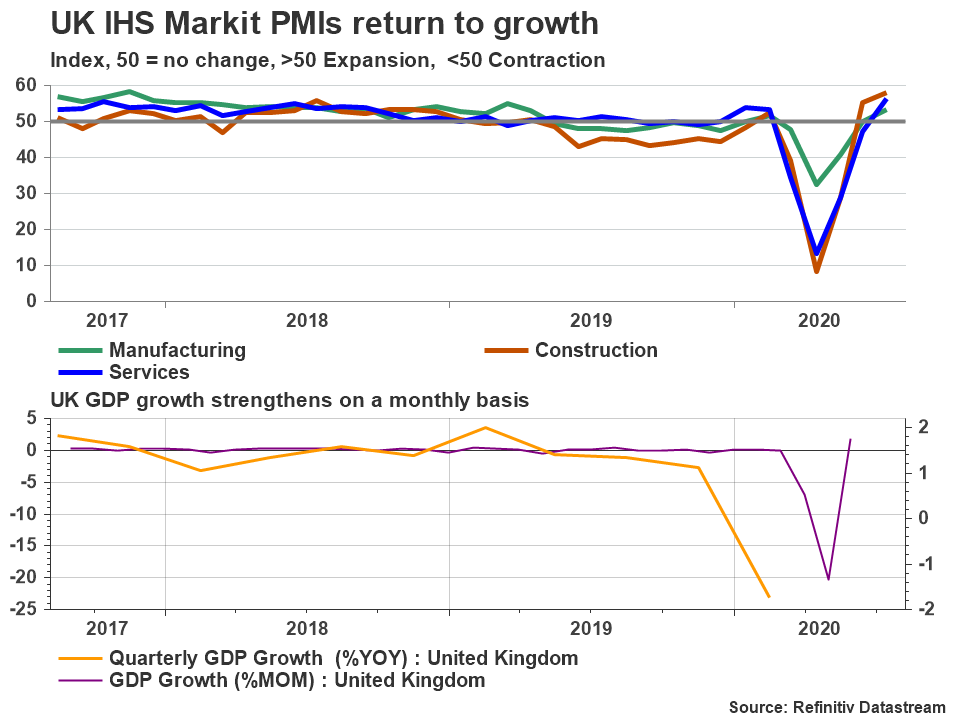 Still, the recovery should show persistence in the coming months to keep a footing under the pound and the uncertain future of the virus crisis cannot warrant this. Unless a vaccine is found, distance mandates and restrictions in business capacities as well as scared consumers will be an obstacle for a proper GDP rebound. The fact that a full lockdown is the least any government would like to imply at the moment creates optimism that the worst may be behind and the data improvement may continue. However, this requires additional stimulus in order to help companies retain their workforce and therefore support spending.

Despite that, the central bank decided to adopt a wait-and-see approach for now, leaving interest rates at a record low of 0.1% and its asset purchase program unchanged last week. Perhaps, the QE program is nearing its limits and negative interest rates would only hurt the banking sector, which is heavily exposed to consumer and mortgage lending. So, a more accommodative policy this month could waste some power and prove to be premature and less effective if the virus situation deteriorates in autumn, and in the worst scenario,  Brexit trade talks fail to make progress before the December deadline. Besides, sub-zero rates did little to boost consumption and inflation in the Eurozone and Japan in the previous years, hence they could be fruitless in the UK case as well. Moreover, the government has announced a new aid package worth of £30 billion in June and that removes some pressure from the central bank to take immediate action.

Nevertheless, the central bank left the door open for additional stimulus this year and kept negative rates in the toolbox as the overall economic risks remain tilted to the downside.

Unemployment rate to hit a 2-year high, but markets have been informed

Given the BoE’s cautious statement on a rising unemployment rate, Tuesday’s employment readings for June will be closely watched too. Employment is forecast to have fallen by 288k, more than doube the 125k decline in May, sending the jobless rate to a two-year high of 4.5% from 3.9% the past two months. Yet, unless the latter deviates significantly from estimates, it could generate little volatility in the pound as the BoE policymakers have already warned that the measure could rise as high as 7.5% in 2020. Note that the government will be gradually scaling back its job retention scheme from August till October and businesses will have to start paying insurance and pension contibutions again. 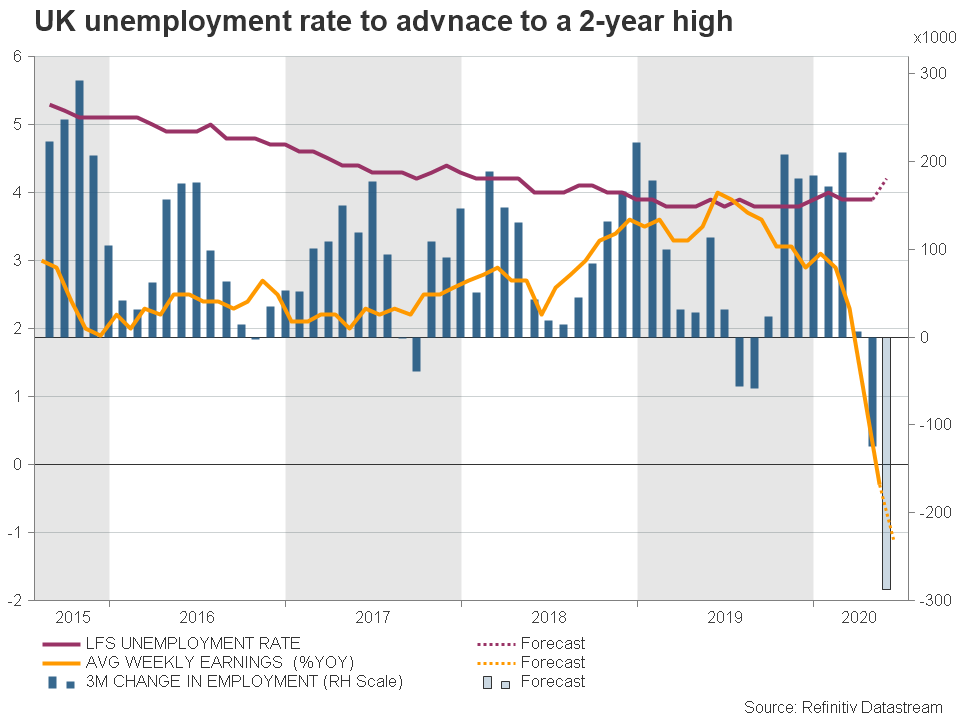 Looking at GBP/USD, while the pair was heading for another green week after bullishly exiting an ascending channel, Friday’s upbeat US nonfarm payrolls stole some momentum from the pound, pushing it to the red zone instead. From a technical perspective, the price was unable to close above its previous high of 1.3165 as a long-term descending trendline stretched from the 2015 tops blocked the way on the upside, with the pair creating a bearish double top formation around this level. Should the UK data miss forecasts by a wide margin, pushing the price below the 1.2980 neckline, the market could face a more aggressive selling. In this case, the 20-day simple moving average (SMA) could be the next target around 1.2850, while lower, the spotlight will turn to the flattening 200-day SMA at 1.2700.

In the event of a strong upside surprise, the bulls may accelerate towards the downward-sloping trendline. If they clearly beat that barrier, closing above the 1.3200 number too, the rally may stretch towards the 1.3330 hurdle. Higher, the next stop could be around 1.3515.

It is also worth noting that the US Congress will keep negotiating a broader additional virus relief package despite President Trump signing some executive orders to extend unemployment benefits at a reduced rate, a temporary payroll tax deferral, eviction protection and student-loan relief during the weekend. The talks are expected to resume at a later date, though any positive headlines that a deal is nearing could pressure the pound. Further escalation in China-US tensions could also enhance the safe-haven dollar and therefore add another headwind to the cable.