The US consumer price index, retail sales and industrial production are all scheduled for release this week but whatever the actual results are the markets will keep the odds for a September rate cut high as the US-Sino trade trouble looks irreversible in the year ahead. Instead, the question should be how aggressively the Fed should act to balance the economy.

The Consumer Price Index (CPI) for the month of July will come first into view on Tuesday at 1230 GMT and analysts are positive for a small acceleration in the index. Particularly, the headline CPI is projected to inch up by 0.1 percentage points to 1.7% year-on-year (y/y), while the core metric is forecast to hold steady at 2.1% y/y, flagging that price downfalls in volatile items such as food and energy are likely capping inflation pressures.

With inflation projections following growth prospects lower around the world, a steady core CPI rather than a weaker print, could be good news to Fed policymakers who aim to drive inflation towards the 2.0% target. The Fed’s closely watched core PCE inflation index edged up to 1.6% y/y in June and an unchanged core CPI on Tuesday could limit chances for a pullback even though the positive correlation between the indices has somewhat weakened over the past year. 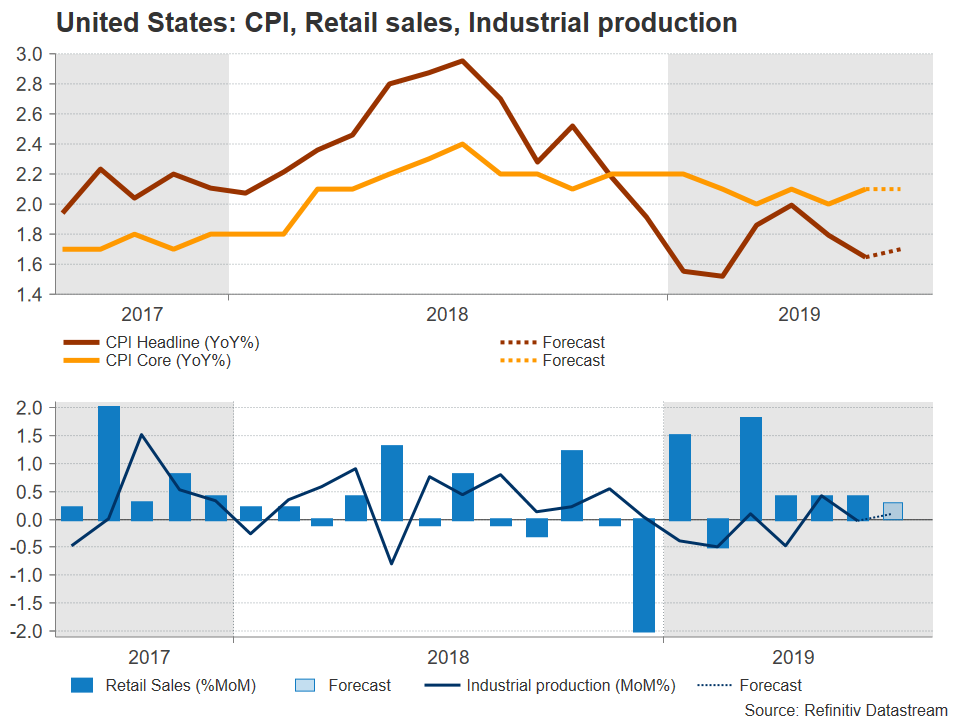 On Thursday at the same time, US retail sales for July may further diminish hopes for an inflation upturn as analysts predict a moderate monthly increase of 0.3% versus 0.4% in the preceding month. Although such a result is considered normal, it still seems relatively lackluster under a tightening labour market where the unemployment rate is the lowest in 50 years and wage growth the highest in a decade. Consumers could have spent more in light of lower taxes provided by the US government, but it seems that the Fed’s rate hikes last year and the uncertainty around the US-Sino trade relations may have offset part of the boost to purchasing power. The non-stop easing in US house prices over the past year is more evidence that demand for consumption is not enough to meet supply despite consumers remaining confident about the economy.

The continued dip in ISM manufacturing PMI survey will shift extra attention to the industrial production data due on Thursday at 1315 GMT. After reporting no growth in June, US factories are said to have experienced a negligible output increase of 0.1% m/m overall, with the manufacturing sector, which has been contracting at a pace of 2.2% y/y in the second quarter – the largest decrease in three years – probably contributing negatively (-0.1% m/m).

Undoubtedly all blame will be on the trade war for the slack in factory production if the numbers come in line or below expectations. With Washington and Beijing raising their swords once again this month, markets see no agreement between the sides on the horizon and more downside for US businesses, that could potentially slash US and global economic growth in the year ahead. At the same time, investors are increasing bets for a sharper rate cut of 0.50bps at the next FOMC meeting in September. While the scenario of a 25bps rate reduction is still the favorite according to the Fed funds futures, the latest warning of an additional 10% import tariff on Chinese goods by the Trump administration lifted speculation for a more aggressive dovish monetary move and significantly elevated demand for safe-haven assets such as the Japanese yen and the Swiss franc.

Without the eurozone political troubles and the Brexit turmoil, the US dollar could have suffered a more severe injury in FX trading. Despite cooling in the second quarter, the US economy is still relatively robust compared to the rest of the world and hence a secure place to park investments. But unless Washington and China provide trustworthy clues that a trade deal is on the table, investors’ preference may likely remain on the yen, the Swiss franc and gold, keeping any data-related upside in the dollar short-lived.

In intra-week action, USDJPY traders could search for immediate resistance near 106.67 and then within the 107.20-107.60 area in case the upcoming data arrive better-than-expected. Alternatively, if the numbers disappoint, raising the odds for a more cautious FOMC meeting in September, the focus will turn to the 104.64 and 103.40 levels.

Following the data, the spotlight will turn to the Federal Reserve annual symposium in the Jackson Hole mountain resort from August 22-24 as markets seek clarity on the future path of interest rates. Recall that Fed chief Powell dismissed the beginning of a long rate-cut cycle at July’s FOMC policy meeting but did not rule out another rate reduction.