In America, the spotlight will be on Thursday’s weekly jobless claims and consumer confidence numbers, which will reveal how quickly unemployment is rising and how badly the consumer has been hit. Contrary to conventional wisdom though, a disappointing set of data could boost the US dollar, which has been acting like a safe haven amid all the chaos. The minutes of the latest FOMC meeting today and CPI inflation stats on Friday might be seen as outdated.

Unemployment: A tragedy in the making

Those looking for good news are unlikely to find them in this week’s data releases, as forecasts suggest that another 5 million Americans filed for unemployment benefits last week. If met, that would push the total number of job losses up to ~15 million, just in the last three weeks. For perspective, all of the American workforce is 163 million.

In other words, the nonfarm payrolls (NFP) report for April that will be released next month is shaping out to be a disaster like we’ve never seen before, and the weekly jobless claims will give us a sense of just how big that disaster will be. The real fear is that so many people are being laid off that this crisis could lead to a vicious loop, where rising unemployment feeds into even less consumption, forcing businesses to fire even more staff, and so on – ultimately cascading into a depression.

The other number to watch on Thursday will be the University of Michigan’s consumer sentiment index for April. Expectations are for a sharp drop, which would all but confirm that consumption is about to fall off a cliff. While everyone already expects a recession, these figures will help investors gauge how deep of a slump this will be. 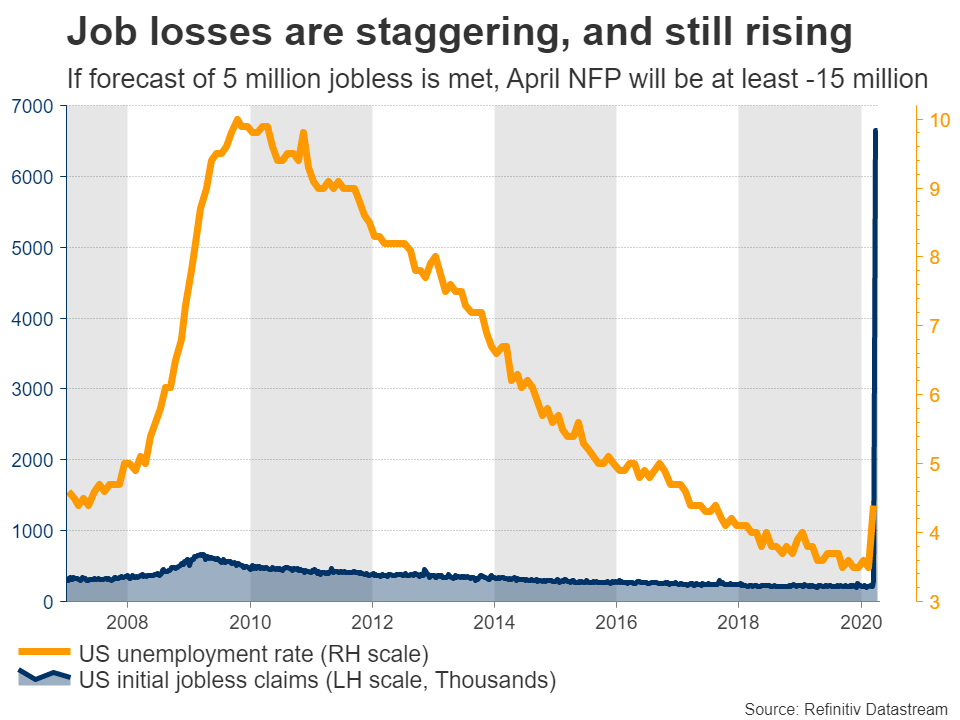 The Fed minutes on Wednesday and CPI inflation data for March due on Friday are unlikely to attract as much attention, as they may be outdated already. The Fed has already fired the big guns.

But the dollar could still gain

In the past few weeks, bad news has generally been good news for the dollar. The greenback has been acting like a safe haven amid all the chaos, gaining even when US data disappoint, as fear-driven buying overpowers everything else. We saw this play out last week, with the dollar soaring higher even after initial jobless claims disappointed in a big way.

The dollar isn’t just the US currency, it’s also the world’s reserve currency, and those defensive properties have been on full display amidst all the chaos lately. When the going gets tough, all investors and corporates want to hold is the dollar – it’s stable, liquid, and accepted everywhere.

Therefore, another set of disappointing numbers this week could even help the dollar extend its gains. This paradoxical relationship won’t last forever, but for now, this seems to be the FX playbook.

Will the market calm last?

With the same logic, the coming few weeks could also be a favorable period for the greenback. Markets are currently enjoying a calm phase, taking heart from signs that the worst may be over in Europe. That has halted the dollar’s recovery, for now.

However, a lot of uncertainty is still in the air. For one, there’s no clear timeline on when any of these economies will be reopened, and the lockdowns could be extended well into May. In the meantime, we will get a plethora of news about cratering demand, soaring unemployment, companies slashing their earnings forecasts, and who knows what else. The bottom line is that this recovery looks fragile, and the dollar could stay in demand overall while investors grapple with so much uncertainty.

Taking a technical look at euro/dollar, if sellers stay in charge and pierce below 1.0830, their next target may be the 1.0765 zone.