The next Nonfarm payrolls (NFP) release is on Friday at 1230 GMT and expectations are for a weaker but still consumption-supportive outcome. However, with global risks heightening in the background, markets believe that the labor market could soon falter in front of a tougher US-China trade war, opening the window wider for additional monetary stimulus.

According to analysts, the US economy added 159k new job positions in August compared to a 164k increase in July and a 193k rise in June. Although softer readings are theoretically reasonable when the unemployment rate is around 50-year lows, making skillful workers scarcer, investors could consider any continued weakness as evidence that businesses may be cutting hiring to save costs in the face of rising US import tariffs.

If true, it won’t take long for consumers to set limits on spending and hence drive the already weakening US GDP growth lower, especially if average hourly earnings lose momentum as well in the coming months. Yet, as long as wage growth holds above 3.0%, and more importantly higher than the 1.6% core PCE inflation rate, and employment growth holds above 100k, strong consumption will keep offsetting losses in the struggling manufacturing sector. Forecasts are for average hourly earnings to inch down to 3.1% y/y from 3.2% in July.

It is also worth noting that the market-moving ISM manufacturing index slumped unexpectedly below the 50 level that separates contraction from expansion in August for the first time in three years, giving a negative warning for Friday’s NFP employment report. 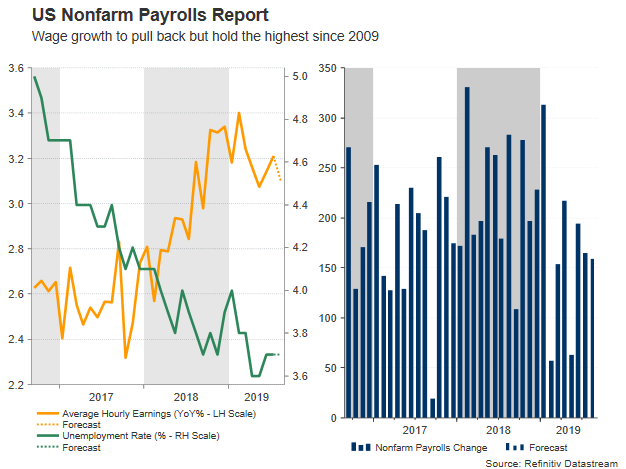 What will the Fed do

In terms of monetary policy, the above results may not be encouraging but neither are they a cause for more stimulus. Nevertheless, with Washington and Beijing still kicking the can down the road in the hopes of finding a compromise in the more-than-a-year trade fight, the Fed may proceed with another 25bps rate cut this month as markets widely anticipate. Fed funds futures are currently giving a probability of 86%.

This month US producers will face a higher tariff of 15% on a variety of Chinese imports including technology items, while at the same time Chinese producers will have to pay 5% tariff on US crude imports, something that could further dampen business sentiment and disrupt supply chains. Taking this into account, the Fed will proactively push interest rates lower to avoid a sharper GDP growth slowdown in the third quarter. And this might not be the end of the story as the central bank could turn even more dovish in the coming months given that large differences between the US and China make an agreement unlikely in the year ahead, while fragile markets in Germany and the UK could also weigh on the US economic performance.

How aggressively the Fed could act, though, is still up for debate. The two-day FOMC policy meeting that concludes on September 18 could provide some clues through the famous dot plot chart which displays policymakers’ views on where fed funds rates should be in the next three years and in the long run. If the upcoming data releases come in lower-than-expected, a bigger number of policymakers could shift to the dovish side, asking for sharper rate cuts. Whether the Fed could restart quantitative easing is another matter of interest.

How the dollar could react

The dollar has been outperforming against a basket of six major currencies this week thanks to the tumbling euro and pound but it kept quiet versus the safe-haven Japanese yen.

In the absence of new trade headlines, USDJPY is likely to maintain the sideways move if the data don’t deviate much from forecasts. In case of a big upside surprise, however, the pair could run above the 200-period simple moving average (SMA) in the 4-hour chart and challenge the 107.00 mark, while a steeper rally could also reach the 107.60 barrier.

Alternatively, should the figures significantly miss expectations, the pair could revisit the 105.50-105.00 area, with the recent low of 104.44 remaining in focus as well.

In Wall Street where investors cheer on lower borrowing costs, a disappointing NFP report could underpin stock prices on the back of falling hiring costs and on hopes of a more accommodative monetary policy and vice versa.