Personal income and spending numbers will come under investors’ radar on Friday (17:00 GMT) and could upset the recent run of positive data out of the United States amid some concerns that income and consumption growth is moderating. The personal income and outlays report, which also contains the Fed’s favourite inflation gauge, will be one of the final major releases for 2019. But can it steer the US dollar amid end-of-year flows and thinning liquidity?

Is US consumption slowing?

Private consumption remains by far the biggest component of the US economy so last month’s report, which showed income growth staying flat in October, raised some doubts about how long consumers can go on supporting the American economy. Annual growth in personal income and spending has come off the peaks of 2018 of around 6% when they were boosted by President Trump’s tax cuts. Personal income growth is currently running slightly above 4%, while consumption eased to 3.7% in October.

On a monthly basis, personal income is forecast to have risen by 0.3% in November and consumption growth to have accelerated slightly from 0.3% to 0.4%. While such numbers wouldn’t completely allay concerns that the annual trend is downwards, neither should they cause much alarm. 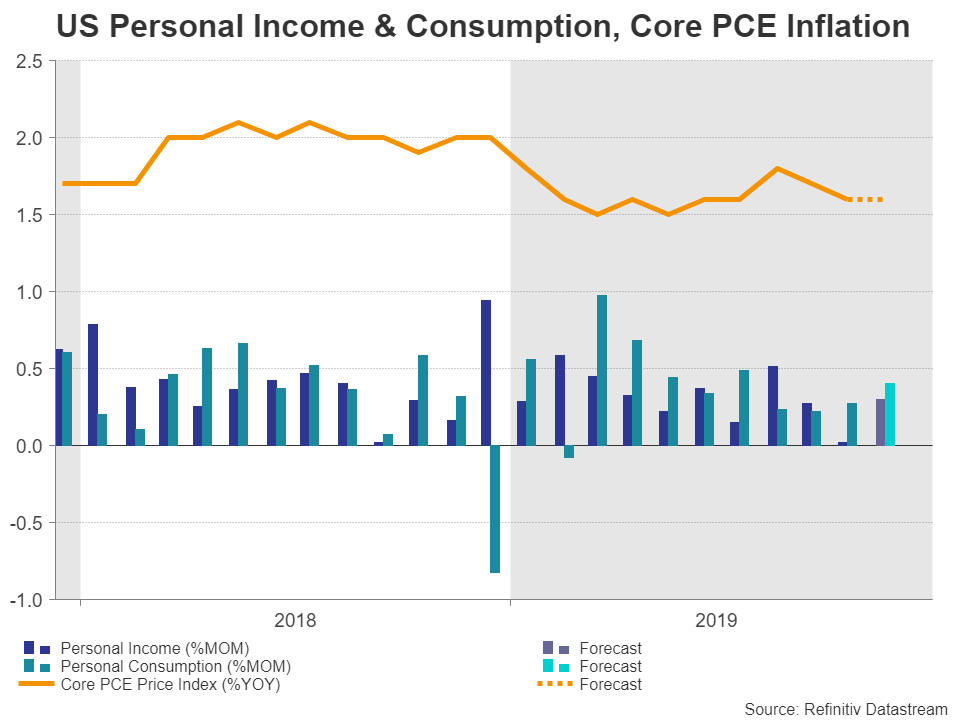 The Federal Reserve, at least, remains confident that the US consumer isn’t about to cut back on spending and expects the economy to grow at its long-term trend of 2.0% in 2020. The three rate cuts delivered by the Fed this year should be supportive of growth in the coming months, with the manufacturing sector still reeling from the months-long tariff war.

The dollar is likely to extend its latest rebound against a basket of currencies if the data matches or beats expectations, especially as the euro and the pound are losing steam again. Against the yen, the bulls could target the 110 level now that the pair has just broken the 61.8% Fibonacci retracement of the April-August downtrend at 109.35.

However, with traders becoming impatient about the lack of updates on the US-China ‘phase one’ trade deal, they could overreact to any negative surprises in Friday’s numbers. Dollar/yen is vulnerable to a drop towards the frequently visited area of 108.42 – the 50% Fibonacci retracement level – from any sell-off.

Markets will also be watching the core personal consumption expenditures (PCE) price index, which is the inflation measure the Fed targets for its price goal. The core PCE price index has been stuck below the 2% target throughout 2019 and is expected to have stayed unchanged at 1.6% year-on-year in November.

There have been some signs lately that inflationary pressures are on the up, so a positive surprise is more likely than a negative one. But with policymakers signalling lately that they are happy to let inflation run slightly above 2% given that it’s repeatedly missed the target since the financial crisis, any pickup in the core PCE price index is unlikely to generate much of a response.

In other data to be watched on Friday, the final GDP reading for the third quarter is due to be released at 13:30 GMT, though no revision to the second print of 2.1% is anticipated.