Another round of high-level trade talks between Washington and Beijing has been arranged and the spotlight now turns back to data releases as markets are trying to figure out whether there is a need for a sharper rate cut, ahead of the Federal Market Open Committee’s policy meeting next week. Retail sales and the Consumer Price Index will feature the US calendar on Thursday and Friday respectively at 1230 GMT, though the results may look familiar.

US and China prefer stimulus than solving trade war

After slapping more tariffs on each other at the start of this month, the US and China agreed to return to the negotiating table early in October for the first time since July’s failure to find a compromise. Both sides are standing firm on their demands despite risks of a global recession rising high in the background, relying instead on domestic stimulus measures to maintain economic growth at a healthy pace – a behavior that limits the odds for a constructive meeting next month.

China is blending fiscal and monetary adjustments to counteract the negative effect of the trade war, recently cutting the amount of cash that banks must hold as a reserve for the third time this year and promising to boost disposable income this year and in 2020. On the other hand, Trump’s persistent complaints that the Fed is too slow in reducing interest rates relative to its counterparts suggests that the US strategy is more monetary-oriented.

Markets are currently fully pricing in a 25bps rate cut for next week’s two-day FOMC policy meeting (17-18 September) as the core PCE inflation rate remained unchanged comfortably under the Fed’s 2.0% target and the ISM business survey found the manufacturing sector in contraction during the month of August. Although consumers are still in great shape, with the unemployment rate remaining at 50-year lows and wage growth at decade highs in July, it is believed that without the industrial support, consumer spending may not be able to sustain economic growth at a healthy pace alone. 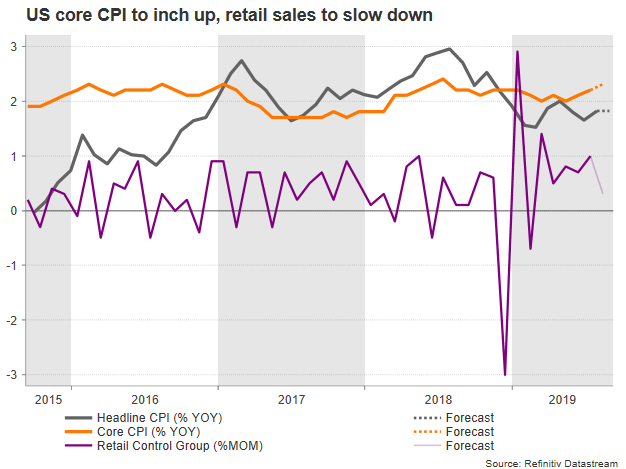 That brings Friday’s retail sales data to the center. According to forecasts, retail sales have increased at a slower monthly rate of 0.3% overall in August versus the 0.7% growth printed in July, while more importantly, the retail control measure which excludes vehicles, food and energy, and corresponds more closely to the consumer spending component of GDP, is expected to ease from 1.0% to 0.3% m/m. Separately, total business inventories for the same period are projected to rebound to 0.3% m/m after showing no growth, providing some clues over weaker domestic demand.

A day earlier, investors will also be reviewing the August CPI numbers to clarify whether consumption is still inflation supportive and the results may be more encouraging than retail sales could be. Particularly, the core CPI could bring a smile to Fed policymakers’ faces if the gauge inches up to 2.3% from 2.2% – a level last seen a year ago – , increasing hopes that the Fed’s favorite core PCE inflation rate could also show strength in coming months. Meanwhile, a steady headline CPI at 1.8% could signal that volatile items such as energy and food have been offsetting price increases in other products.

All in all, the above projections are in familiar territory and hence cannot be used as evidence to throw blame on the US-China trade war yet, if the data come in line with expectations.

What about the dollar?

However, if the numbers deviate out of the comfort zone, traders could adjust their rate expectations and therefore their dollar positions. In this case, a significant upside surprise in the data could ease worries over the consumption resilience and dampen the scenario of a sharper rate cut in coming months, pushing the dollar into the 108.00-108.50 area.

While the resumption of trade talks has eliminated the odds for a 50bps rate cut in September according to Fed funds futures and shifted demand slightly away from safe-haven assets, a large miss in the upcoming data could bring the case back on the table. As a result, USDJPY could pull back into the 107.20-106.80 zone, while a bigger disappointment could pressure the pair under the 200-period simple moving average (SMA) in the four-hour chart and towards the 106.00 number.