US retail sales could be the worst ever, but dollar may not react – Forex News Preview

Posted on May 14, 2020 at 9:11 am GMTChristina Parthenidou, XM Investment Research Desk

Millions of Americans have been applying for unemployment benefits the past two months as the business pressure stemming from the Covid-19 crisis had led to massive layoffs, increasing concerns about how deep consumption, which accounts for two thirds of the US economy, could crash at some point this year. US retail sales due on Friday at 12:30 GMT are expected to reinforce those worries, reflecting the steepest monthly decline in spending. However, the data may not necessarily expose the dollar to a notable sell-off.

The world is facing its most unprecedented period in its history. Although some social distancing and health protection measures were taken in previous pandemics such as the Spanish flu, the global economy was never in such a lockdown before and hence governments and central banks have no experience on how to direct stimulus policies in this case. What is certain is that as long as there is no real clue when the ongoing drug trials will lead to an effective cure or vaccine, consumption will remain restricted and consumers and businesses will need continuous support to maintain credit flows.

In the US’s case, the government injected some trillions of dollars in the first round of stimulus in April while the Fed started its easing process earlier in March, cutting rates twice to a range of 0-0.25% and expanding its asset purchases under its quantitative easing program among others, with all its actions said to provide a total of 6 trillion dollars of liquidity.

Following a record monthly decline in the core CPI inflation this week, which raised the prospect of a deflationary phase, US retail sales for the month of April will be next in line to reasonably indicate that the said stimulus measures have yet to take effect as households were urged to stay indoors and businesses were shut during that period. Particularly, retail sales are expected to have tumbled by 12% m/m after falling by 8.4% in March. Excluding automobiles, projections are for an 8.6% m/m decline from a 4.2% downfall previously. 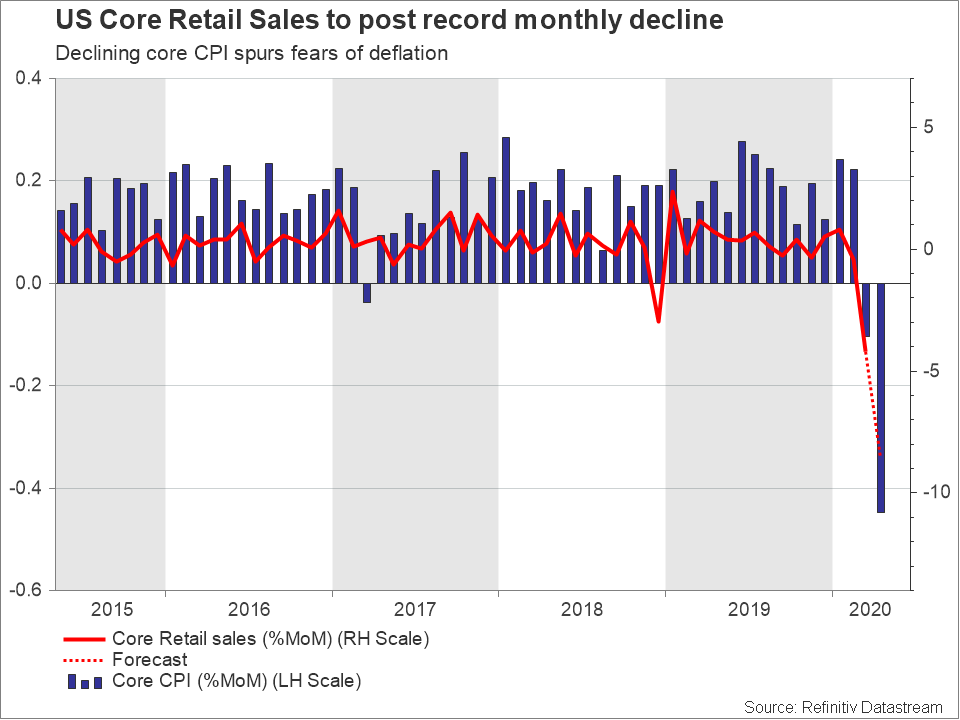 Negative interest rates are out of the way for now, virus risks remain

In the coming months, the picture could be less dramatic if the White House keeps re-opening the economy, allowing purchases – and accumulated savings too – to expand to additional sectors. However, the negative side of the story suggests that a premature removal of restrictions may trigger a second virus wave, subsequently forcing authorities to resume the old lockdown status, a move that could further pressure consumption through a rising number of failed businesses and a surging unemployment rate. In fact, some resurgence in new infection cases has already been detected in Germany and South Korea recently, while the origin of the pandemic –Wuhan – has also reported its first non-imported incidence since the end of lockdown, increasing worries that such a scenario may not take long to realize, delaying the so desired V-shaped economic recovery.

Consequently, markets started to price in that more stimulus may be necessary to avoid liquidity issues turning into solvency problems, with traders opening a small window of negative interest rates in the US, especially after President Donald Trump renewed calls for the Fed to push rates below zero. While it remains to be seen if 2020 will keep making Trump’s dreams of lower rates true ahead of the November elections, Fed chief Jerome Powell has insisted on Wednesday that negative rates are not an attractive policy tool due to the weak evidence of their effectiveness – likely pointing to Japan and the Eurozone – and that he intends to continue using the same toolkit as he is optimistic that it is working. Additionally, he called for more fiscal support.

The dollar reacted positively to Powell’s comments, bouncing slightly back above the 107.00 level against the Japanese yen. The safe-haven currency has been losing its shine the past few months as the advantage of rate differentials between the US and other major economies has been narrowing, motivating investors to look elsewhere. But Powel provided some optimism on Wednesday that the gap may not squeeze further, and Friday’s retail sales may not change that narrative.

Looking at USDJPY on the four-hour chart, the pair is re-testing the 50-period simple moving average (SMA) on the downside at 106.77, a break of which could take a breather near 106.40 before all attention turns to the 106.00 mark.