Week ahead – Markets to enter holiday lull, but mind the volatility risk

As 2019 draws to a close, markets are set to enter a quiet period over the next couple of weeks, with no central bank meetings on the agenda and little economic data to keep traders entertained. That doesn’t mean that everything will be calm though, as liquidity will probably be very thin, making sharp price moves possible even without much news.

US durable goods orders on the dollar’s sleigh

In the world’s biggest economy, the sole data release will be durable goods orders for November, due on Tuesday. This data set is seen as a proxy for business investment, so it’s important for GDP calculations and therefore, for the markets. Forecasts suggest that the headline rate picked up to 1.9% on a monthly basis, from 0.5% in October.

Alas, the risks around that forecast may be tilted to the downside, with a disappointment being more likely than an upside surprise, considering the drop in the new orders sub-index of the ISM manufacturing PMI for the month. That index dropped further below 50, signaling that new orders are contracting at a quicker pace. Granted, actual durable goods figures are extremely volatile from month to month, but overall, the sustained drop in ISM new orders clearly points to persisting weakness. 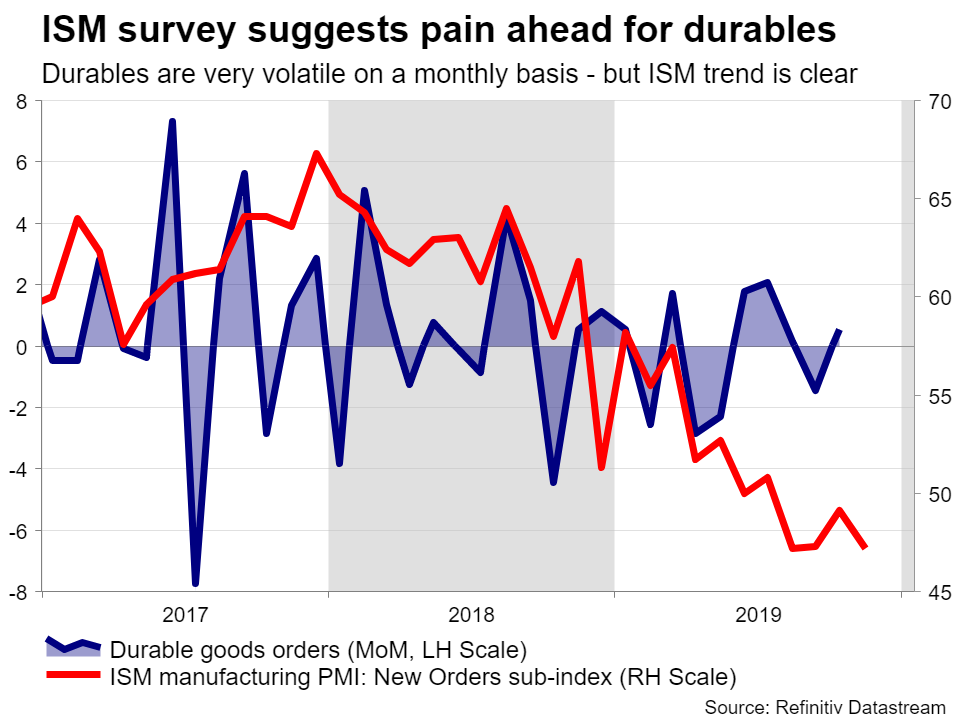 That said, markets might wait for the December data – which will also encompass the reaction to the ‘phase one’ US-China trade deal – before drawing any concrete conclusions about the outlook for capital expenditure.

While a potential disappointment in these data could weigh on the dollar a little, it’s still difficult to be negative on the currency’s broader outlook, especially versus the euro. European growth may be bottoming, as ECB President Lagarde hinted recently, but it’s stabilizing at a very low level – so there’s not much to celebrate. Unless euro area governments launch a substantial fiscal spending package to boost growth, there’s little prospect for a real rebound in the euro. Perhaps if the Fed starts cutting rates again, that could do the trick in pushing the dollar lower – but that seems unlikely at this stage.

Across the Canadian border, Monday will bring GDP numbers for October. The loonie has soared lately, drawing strength from the de-escalation in trade tensions and the surge in oil prices, while also capitalizing on the broad pullback in the US dollar.

Economic data are healthy too, and in combination, all this has investors thinking that the Bank of Canada (BoC) won’t cut rates moving forward. Markets currently assign a mere 20% probability for a rate cut over the entire next year, which is pretty low considering how many things can ‘go wrong’ in twelve months, and how quickly narratives can change. 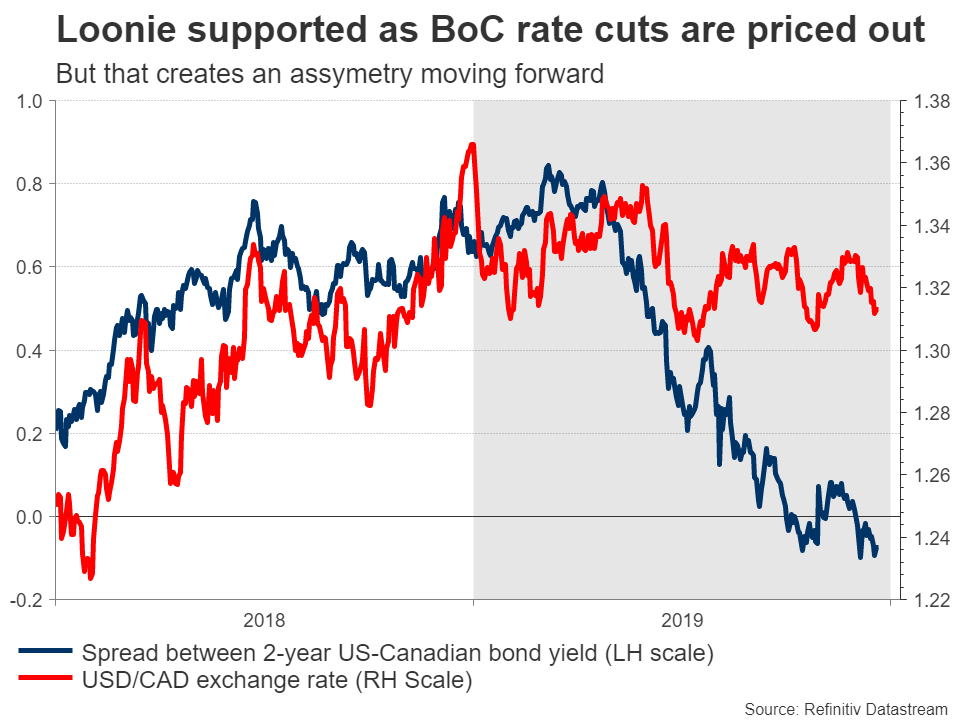 The subdued pricing implies that the risks surrounding the loonie going forward may be asymmetric. If everything goes right – and economic data stay solid while the trade ceasefire holds – that would merely reaffirm that the BoC will stay on hold for the foreseeable future and hence any gains in the loonie may be relatively modest. There isn’t much left to price out in terms of rate cuts, and the BoC won’t be hiking rates.

On the contrary, any weakness in the data or some other negative development could see the pricing for BoC rate cuts soar rapidly, and by extension trigger much bigger losses in the loonie.

In the land of the rising sun, it’s a relatively busy week in terms of releases, though none is likely to affect the yen much. The minutes of the Bank of Japan (BoJ) meeting held back in October are due on Tuesday, before the Summary of Opinions from the Bank’s latest meeting is released on Thursday. Friday will bring the Tokyo CPIs for December, alongside employment and retail sales data for November.

As for the yen, it’s broader direction will depend mainly on how global risk appetite develops, given its safe-haven status. On that front, it could be a cold start to the new year for the defensive currency. Two of the biggest risks facing markets – the trade war and Brexit – have subsided notably and are unlikely to reignite in the coming weeks, so the path of least resistance for the yen may be lower in the near term. 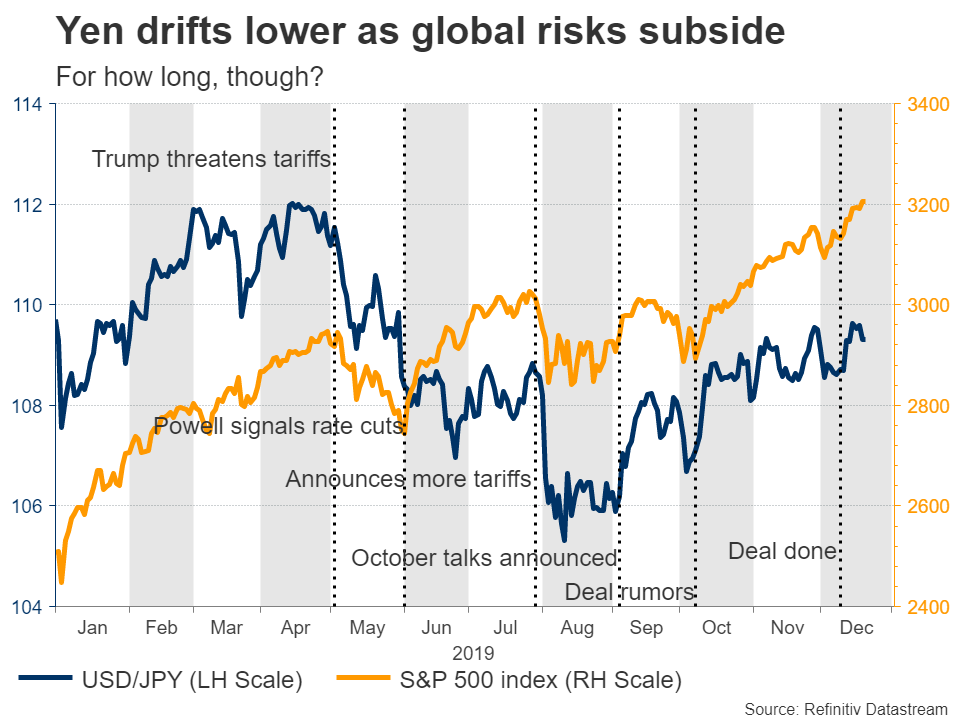 Longer term though, it’s a different story. After the euphoria fades, markets will probably start to focus on the risk of a no-deal Brexit again, as the EU-UK negotiations enter their most crucial stage and the brinkmanship returns. Meanwhile, even if trade fears remain dormant – which is a big assumption – investors could still turn cautious ahead of the US presidential election, especially if one of the progressive candidates secures the Democratic nomination.