Gold’s reputation as the ultimate safe haven asset took a real beating lately, as the collapse in stock markets forced investors to ‘sell everything’ in order to meet margin calls. Yet, that might be about to change. With central banks unleashing a tsunami of quantitative easing (QE) at a time when fear is running rampant in the markets and government debts are about to explode, this seems like the perfect cocktail that could push gold back to record highs. That said, how – and how quickly – the virus narrative evolves will be crucial.

Long way to the top

Gold hasn’t behaved like a safe haven at all lately, despite all the carnage in financial markets. The recent losses in bullion are owed mainly to a ‘sell everything’ approach. With leveraged funds absorbing heavy losses in stocks, many players were forced to close (profitable) positions in gold to cover margin calls. As an old market adage says, ‘in a crisis, all correlations go to one’.

In other words, the key reason for gold’s recent underperformance has been the speed of the sell-off in stocks. The sudden collapse caught many investors off guard and without liquid assets to sell, forcing them to raise cash by liquidating everything, including gold.

In fact, something similar happened back in 2008. Gold fell with stocks in the first few months of the crisis, until the Fed announced its first QE program. That gave investors the ‘green light’ to buy gold again, as the ocean of new liquidity meant they wouldn’t have to worry about funding constraints that much. 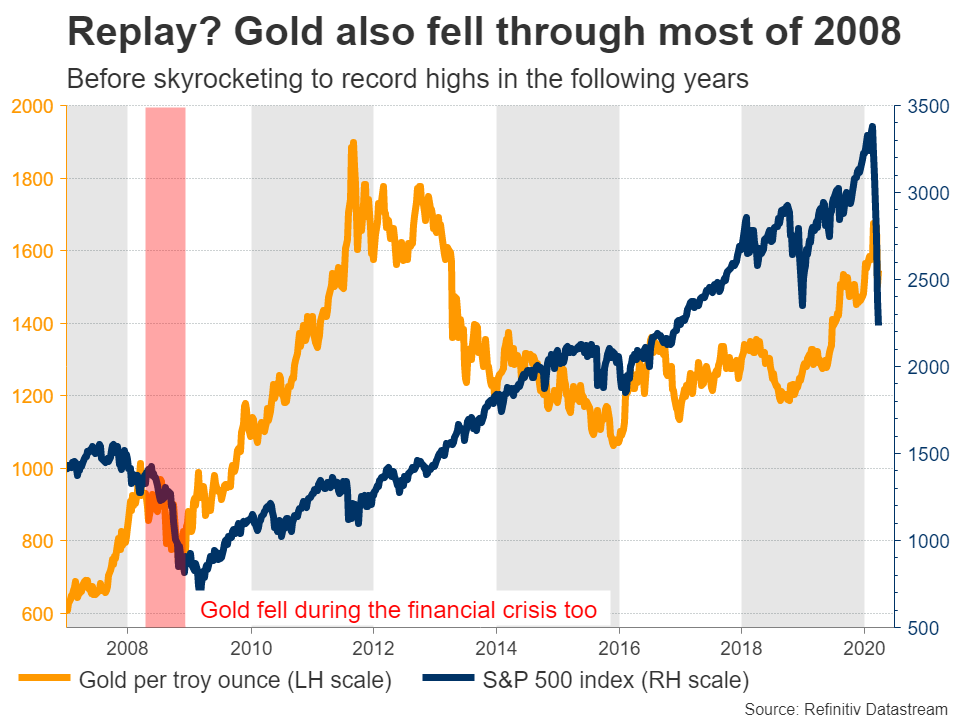 The sharp drop in the dollar following the 2008 QE announcement helped too. Bullion and the dollar usually have an inverse relationship. Since gold contracts are denominated in dollars, a drop in the greenback makes gold cheaper for investors using foreign currencies, boosting demand.

Now, we might be entering the second phase of this saga, where gold begins to act like a haven asset again, as fear-related buying eclipses liquidity-driven selling. Recent developments have been a perfect cocktail for gold prices.

First, gold benefits from lower interest rates. With central banks around the world cutting rates like there’s no tomorrow and yields on government bonds falling to zero or negative, gold – which pays no interest anyway – suddenly looks much more attractive. Adding QE on top after rates have been cut to zero simply means that longer term interest rates will fall as well, providing a further boost to gold.

Then there’s fiscal policy to consider. Governments deficits around the world are about to explode following the massive stimulus packages that have been announced, and higher sovereign debts are a boon for bullion. A huge surge in debt naturally ignites concerns about whether governments will be able to meet their obligations, and whether that debt will be gradually monetized by debasing national currencies.

Risk aversion is the obvious driver. Gold is thought to provide a hedge against all kinds of market volatility and turmoil, which will probably come in handy over the next months as the world enters a virus-induced recession.

Finally, there’s the supply side, as the lockdowns in many countries have resulted in gold mines and refineries shutting down. Hence, less gold will be extracted and processed in the near term, while demand is likely to remain strong or even grow further, a combination which argues for a surge in price.

While the overall environment currently seems to favor bullion, it’s also fruitful to ask what could go wrong. There are three main downside risks for gold.

The first and second relate to how the virus saga will evolve. For example, if the virus situation is brought under control quickly and risk aversion abates, that would put a lid on safe haven demand for gold. Equally, if the situation spirals out of control and worsens to the point of full-blown panic, that could see central banks and governments around the world begin to sell their gold reserves, either to defend their currencies or to finance gigantic deficits.

Put differently, gold could lose both if virus fears calm down and if they escalate very quickly.

The final one relates to the dollar. A huge spike in the greenback could also dampen gains in gold, but with the Fed doing its best to weaken the currency lately, that seems a little unlikely.

In the big picture, the stage seems set for a powerful rally in gold. If history is any guide, a combination of worsening economic conditions, rock-bottom interest rates, and soaring deficits, could be the perfect elixir for bullion and a slow grind higher towards the record highs of 2011 shouldn’t be ruled out.

A further retreat in the dollar would be the icing on the cake. Gold prices denominated in euro and yen terms both reached all-time highs last month, meaning that the only reason that hasn’t happened for regular gold is how strong the greenback is right now.

That said, the speed at which the virus narrative improves or deteriorates will be crucial. The ideal situation for gold would be a slow – but steady – deterioration in the global outlook. Too slow, and risk aversion might fade out. Too fast, and the panic becomes so overwhelming that players that otherwise want to hold gold (governments, central banks, funds) are forced to sell it.