The aussie has continued to struggle, as doubts about a US-China trade deal resurfaced and the US dollar staged a comeback. The nation’s capital expenditure data for Q3 – due at 00:30 GMT on Thursday – may shed some light on whether the RBA will cut rates again, but the biggest driver for the aussie will be what happens next in the unstable trade war. Overall, the risks surrounding the currency appear asymmetric, with a ‘phase one’ deal bringing only modest relief but any disappointment generating substantial downside.

The Australian currency has suffered much collateral damage amidst the US-China trade battle, as the darkening picture for the global economy spells bad news for Australia’s export-driven model. Even though the aussie recovered in October as the two superpowers reached a ceasefire, those gains started to evaporate come November, when markets started having second thoughts about a ‘phase one’ deal.

In fact, the aussie retreated even though the Reserve Bank of Australia (RBA) signaled it may be done with rate cuts for a while. Policymakers hinted they’re happy with the already-enacted stimulus, and that they are in no rush to act again. That said, some soft employment data after that meeting saw the odds for a cut jump again, with the probability for such an action by February now resting at ~60%, partly explaining the aussie’s underperformance.

The upcoming data could make it clearer whether the RBA is primed to act again soon. Third-quarter construction numbers will hit the markets at 00:30 GMT on Wednesday, before capex data for Q3 are released at the same time on Thursday. Most of the focus could fall on the latter, where forecasts point to a 0.1% drop, which if met would mark a third straight decline – albeit a smaller one than the 0.5% drop in Q2. 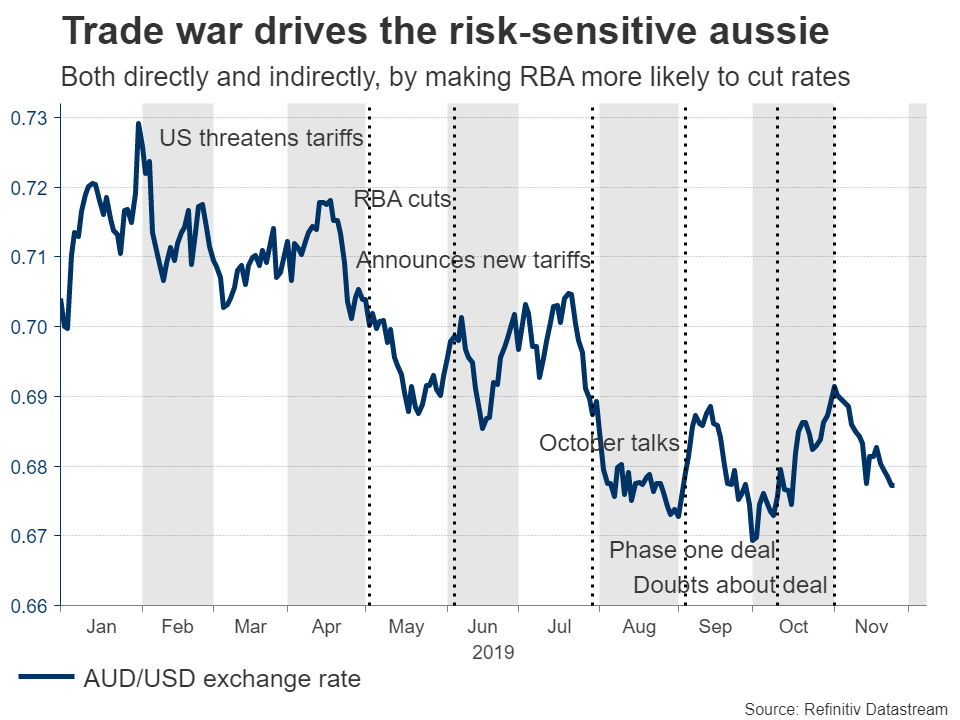 As for the aussie, while a confirmation that capital expenditure continues to fall could extend the recent losses, the broader outlook depends on how the trade war evolves. It may be the single most important variable for whether the RBA cuts again, and therefore for the currency itself.

On that front, things aren’t looking good either. The two sides have reportedly reached “broad consensus” for a ‘phase one’ deal, but still aren’t on the same page about how quickly the existing tariffs should be rolled back. The size of Chinese agricultural purchases is another sticking point. While it’s encouraging that a phase one agreement seems close, remember that we have been here before, and that in the world of trade negotiations “nothing is agreed until everything is agreed”.

More importantly however, it’s debatable how much upside a ‘phase one’ deal can bring. Considering that markets have rallied time and again on signals that it is drawing closer, it may be nearly priced in by now. In other words, the risks surrounding the aussie from trade look increasingly asymmetric, with a preliminary deal being finalized likely bringing only modest relief to the currency, but any disappointment or escalation triggering significant downside as it would derail the existing narrative.

In the bigger picture, even if the first phase goes ahead smoothly, the hard part lies in phase two, when thorny issues like industrial subsidies and intellectual property protection will be sorted out. If the two camps can’t agree on simple matters like a timeline for rolling back tariffs, it’s difficult to envision any real progress on much more complex issues such as those.

Looking at aussie/dollar technically, immediate support to declines may be found at 0.6765, where a downside break could open the door for a test of 0.6720.

On the upside, the first obstacle for the bulls may be the 50-day simple moving average (SMA), currently near 0.6810, before the 0.6880 zone attracts attention.