The latest employment numbers out of Australia will hit the markets at 01:30 GMT Thursday and forecasts point to more job losses, though that may be more of a counting issue than a reflection of real economic conditions. The high-flying aussie could spike lower if the data disappoint, but its broader direction will hinge mainly on risk sentiment. On that front, much will depend on how the global virus picture evolves, especially in America.

Australia is expected to have lost another 125k jobs in May, pushing the unemployment rate up to 7% from 6.2% in April. While that’s natural given that the lockdown only started to be lifted in May, there may also be some statistical mischief involved with these numbers, which generates some downside risks.

Back in April, approximately 750k people that didn’t work and would normally be counted as ‘unemployed’ were instead counted as ‘employed’ or outside of the labor force, because they received support from the government’s JobSeeker wage program. However, they are only classified like that for four weeks from their last payment, so unless they went back to work, many members of this group might show up as ‘unemployed’ in May. 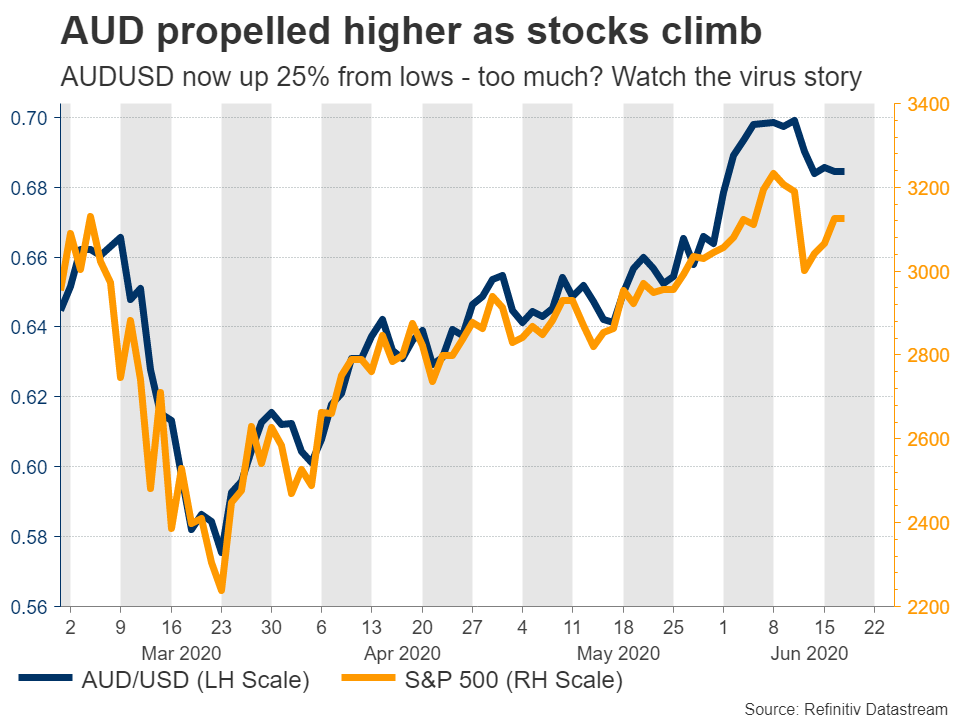 That implies the upcoming data could be even worse than expected, in which case the aussie might spike lower on the news. That said, this is probably just a counting issue, as the weekly payrolls data out of Australia show that the labor market actually stabilized in May.

Aussie rides the euphoria, can it keep going?

In the bigger picture, the Australian currency has staged a monster rally since its March lows, gaining an astonishing 25% against the US dollar as global risk sentiment improved. The nation’s success in containing the virus probably helped as well, as it allowed the economy to reopen with little risk of a second infection wave.

In fact, the aussie is now trading well above its pre-crisis levels, which seems a little strange considering the mounting US-China tensions, and the tensions between China and Australia itself. With China being Australia’s top export destination, and Australia being an export-heavy economy, these present serious risks.

Too far, too fast?

Admittedly, a lot of good news has been priced back in, and the aussie seems to have run too far ahead of fundamentals as markets aggressively frontloaded the global recovery story.

Is a sizeable correction now in order then? That will really depend on whether the new wave of infection that is hitting various parts of the world intensifies, particularly in the US. We have already seen cases spike higher in the most populous US states, and investors are holding their breath to see how the situation evolves.

Overall, the recent euphoria in markets has been built on three key pillars: interest rates will remain low ‘forever’, fiscal discipline is ‘dead’ globally, and the global virus picture is improving. If any one of those falls apart, riskier assets like stocks and the aussie could follow.

Taking a technical look at aussie/dollar, if the data indeed disappoint or risk appetite sours, then initial support may be found near 0.6850. A downside break would turn the focus to the recent low of 0.6775.

On the other hand, if the second wave risk doesn’t materialize, that could give the bulls the ‘green light’ to continue pushing risky assets higher.

In this case, buyers might pierce back above the 0.6980 area and aim for another test of the crucial 0.7060 high. Whether that peak is overcome or not will be crucial.