Australian jobs data: A risk in disguise for the aussie? – Forex News Preview

After taking a beating from virus concerns, the Australian dollar will now look to the nation’s wage growth data for Q4 that are due on Wednesday before the all-important jobs numbers for January due on Thursday, both at 00:30 GMT. The risks surrounding the aussie from these releases appear tilted to the downside. Stellar figures might be brushed aside as outdated, but disappointing ones could signal the economy was already losing steam before the virus impact.

The aussie suffered serious collateral damage from the virus outbreak, as expectations for a sharp slowdown in China and collapsing commodity prices painted a darker picture for Australia’s export-driven economy. Remember that China is Australia’s largest trading partner, so the aussie is typically viewed as a liquid proxy for ‘China plays’, leaving it highly exposed to any negative news.

The point is that if Chinese growth takes a severe hit from virus-related uncertainty, so does Australian growth. Therefore, markets are betting the Reserve Bank of Australia (RBA) will need to add more stimulus soon to support the economy. A quarter-point rate cut is fully discounted by October, with a 50% chance that it comes by June, even though domestic economic data have been solid lately.

Turning to this week’s releases, they are unlikely to change this gloomy narrative. If anything, though, they could make investors more confident a rate cut will come sooner rather than later. 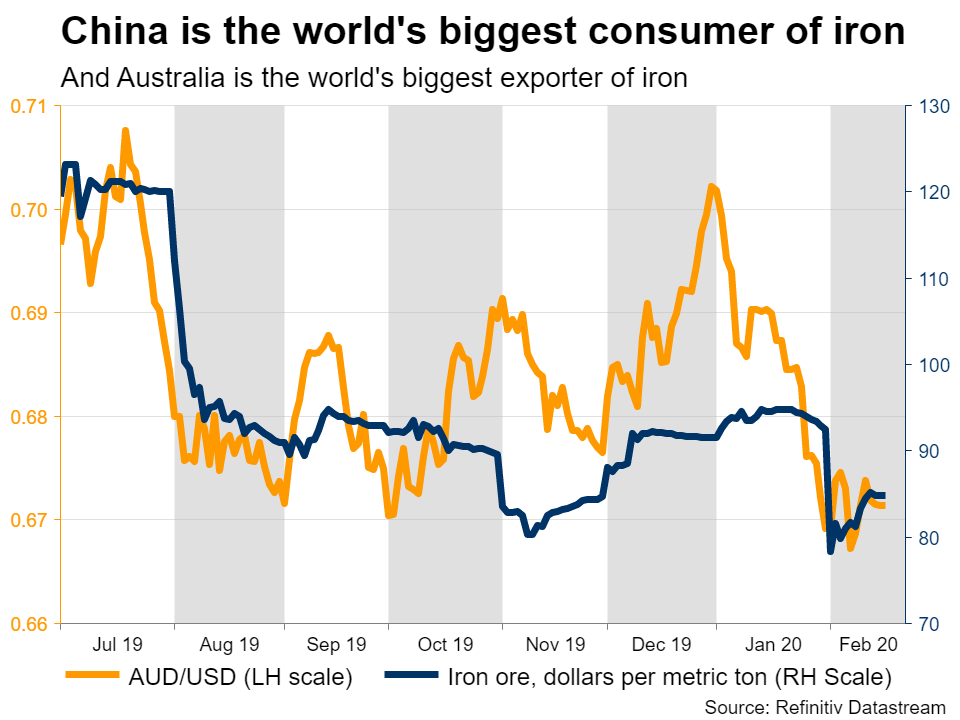 Wage growth in Q4 is expected to clock in at 2.2% in yearly terms, the same pace as previously. Meanwhile, the labor market is forecast to have added 10k jobs in January, which would push the unemployment rate slightly higher to 5.2% from 5.1% previously.

What’s important here is that these numbers mostly reflect the pre-virus period, as virus concerns only surfaced in the final days of January. Hence, the risks surrounding the aussie from these releases look tilted to the downside. If the numbers are stronger than projected, the currency may be unable to gain much because they’ll likely be considered ‘outdated’. On the other hand, a disappointment might be taken as a sign the economy was already losing momentum and that the situation may have gotten even worse after the virus havoc in February, pushing the aussie down.

In the bigger picture, the outlook for the aussie is still bleak. As long as markets remain so focused on the virus and its impact on China and hence Australia, any rallies in the aussie might remain short-lived.

Having said that, the currency has already lost a lot ground, so unless the situation really takes a turn for the worse, aussie/dollar could find it difficult to pierce below the 11-year low of 0.6655 it reached recently. That support zone held strong even amid a perfect storm of collapsing commodity prices, raging bushfires, and a strong US dollar, so it might take something huge for the bears to violate it.

In other words, while any gains in the aussie could be limited in the near term, any significant losses from here also look unlikely. For this narrative to change and for the aussie to be able to stage a sustainable rally, investors might need concrete signs that the disease has been contained, and that the hit on Chinese growth from reduced consumption and supply chain disruptions won’t last long.

Looking at aussie/dollar technically, another wave of declines could find support near 0.6655, where a downside break would turn the focus to 0.6560, an area defined by the February 2009 top.