Wage and employment data will be watched out of Australia this week as investors try to guess how many more rate cuts are on the cards for the rest of the year. The wage price index is released first on Wednesday at 01:30 GMT, with the employment numbers coming up on Thursday, also at 01:30 GMT. Given the huge weighting the Reserve Bank of Australia is attaching to developments in the labour market in setting monetary policy, the upcoming data are bound to generate some volatility for the Australian dollar in an otherwise muted week.

The Reserve Bank of Australia kept interest rates unchanged at its August policy meeting last week, having cut them twice at each of the prior two meetings. But while the Bank signalled that low rates are here to stay and its readiness to cut again, its latest economic projections as well as remarks from Governor Philip Lowe suggest policymakers are not quite as gloomy about the outlook as they appear to be at first glance. 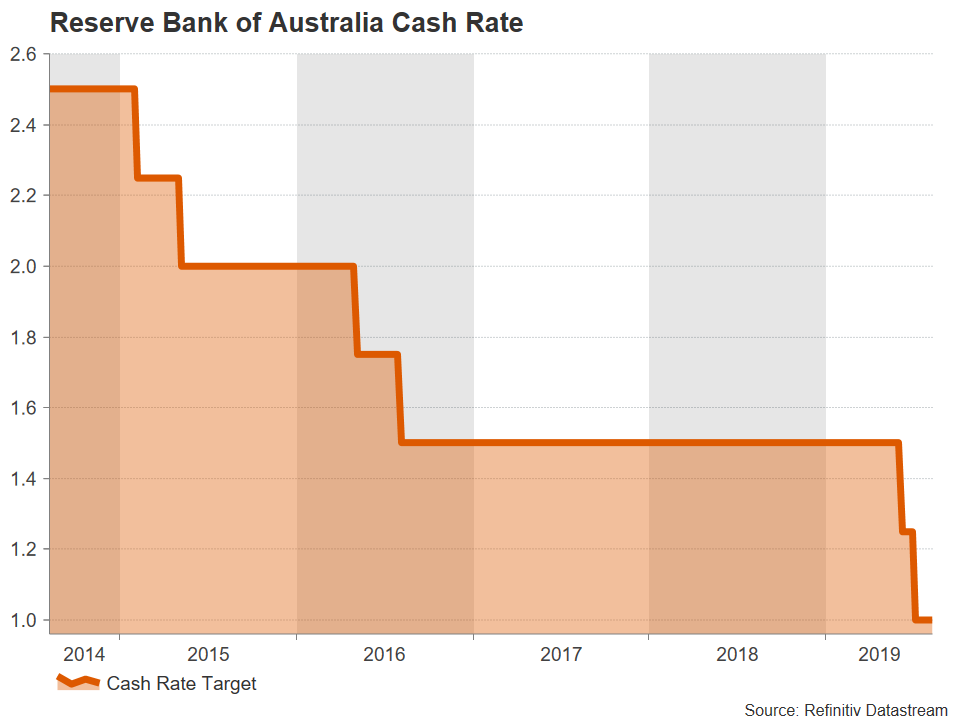 Growth and inflation forecasts were downgraded only modestly in the quarterly Monetary Policy Statement, while Lowe seemed to think the Australian economy “may have reached a gentle turning point” in response to questions before a parliamentary committee hearing on Friday. Still, the RBA sees many uncertainties facing the outlook, both global and domestic. The global risks stem mainly from the US-China trade war, which has taken a turn for the worse in the past 10 days, while domestic demand is being held back by subdued wage increases.

Everything riding on acceleration in wage growth

But the RBA seems to be placing the primary focus on the labour market, as it sees higher wages as the key to raising consumption and lifting inflation. This means policymakers will be watching employment indicators very closely over the coming months to determine whether additional easing in monetary policy is needed to encourage further tightening in the labour market.

Looking at the forecasts, however, this week’s releases are not anticipated to have a dramatic impact on current rate cut expectations, which point to at least one more 25-basis points cut by December. The wage price index is forecast to have stayed unchanged at 2.3% year-on-year in the three-month period to June. The quarter-on-quarter rate is expected at 0.5%. 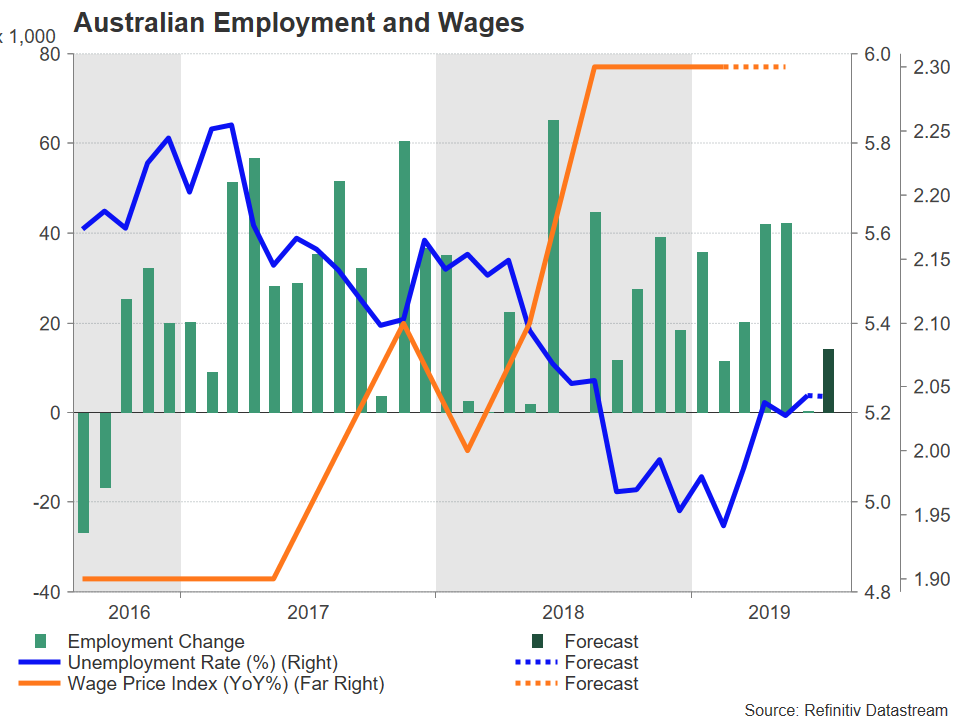 Moving onto Thursday’s jobs figures, employment is projected to have increased by 14k in July versus just 0.5k in June. The unemployment rate is forecast to remain at 5.2%, slightly above the 8-year low of 4.9% achieved back in February. The labour force participation rate – seen as a good indicator of spare capacity in the employment market – is expected to hold at 66.0% in July. The participation rate has been edging higher since late 2014 when the jobless rate started to trend downwards, putting a cap on wage pressures.

If the wages growth and employment figures produce no surprises, aussie/dollar might be able to hold above its immediate support at $0.6743 (the January low) but would likely struggle to rise beyond the $0.68 handle, which is the 161.8% Fibonacci extension of the July upleg. A disappointing set of releases, on the other hand, could pressure the pair back towards the 10-year low of $0.6675 from last week. If this trough is breached, the next major support could come from the 261.8% Fibonacci extension at $0.6624.

Alternatively, better-than-expected numbers on the labour market could propel aussie/dollar above $0.68 and above the June swing-low of $0.6829, barring any sharp deterioration in risk sentiment. In the longer-term picture, however, traders would need to see an easing in the US-China trade tensions and a more rapidly tightening labour market before unwinding their bearish bets on the Australian currency.