The Bank of England is getting ready for ‘Super Thursday’ this week when it inundates investors with its meeting minutes, the latest outlook report and a press conference on top of its policy decision. But having already beefed up its quantitative easing (QE) programme at the last meeting in June, the Bank is not expected to make any adjustments to its policy when it announces its decision at 11:00 GMT. Instead, Governor Andrew Bailey’s press conference at 11:30 GMT will steal the limelight amid mixed messages on the policy direction. After enjoying its best month in more than a decade, the pound is looking vulnerable to any hints about negative interest rates.

Britain’s central bank has so far pumped £300 billion into the UK economy and slashed interest rates to a historic low of 0.10% in response to the coronavirus pandemic. Many economists think the BoE is not done yet and that policymakers will need to increase asset purchases further in the coming months from the current total of £745 billion. But there have been some confusing signals about where policy is headed as the BoE’s messaging does not appear to have improved under Bailey’s leadership following his predecessor Mark Carney’s patchy record on communication.

In June, the Bank’s statement indicated the extra £100 billion they added to QE will last until the end of the year, inadvertently ruling out further easing for 2020 at a time when there’s great uncertainty about the economic outlook. While it’s true that the lockdown-induced downturn wasn’t as bad as policymakers had initially feared and they will probably revise up their economic projections in their quarterly Monetary Policy Report, many would agree it’s premature to get too optimistic about the recovery. 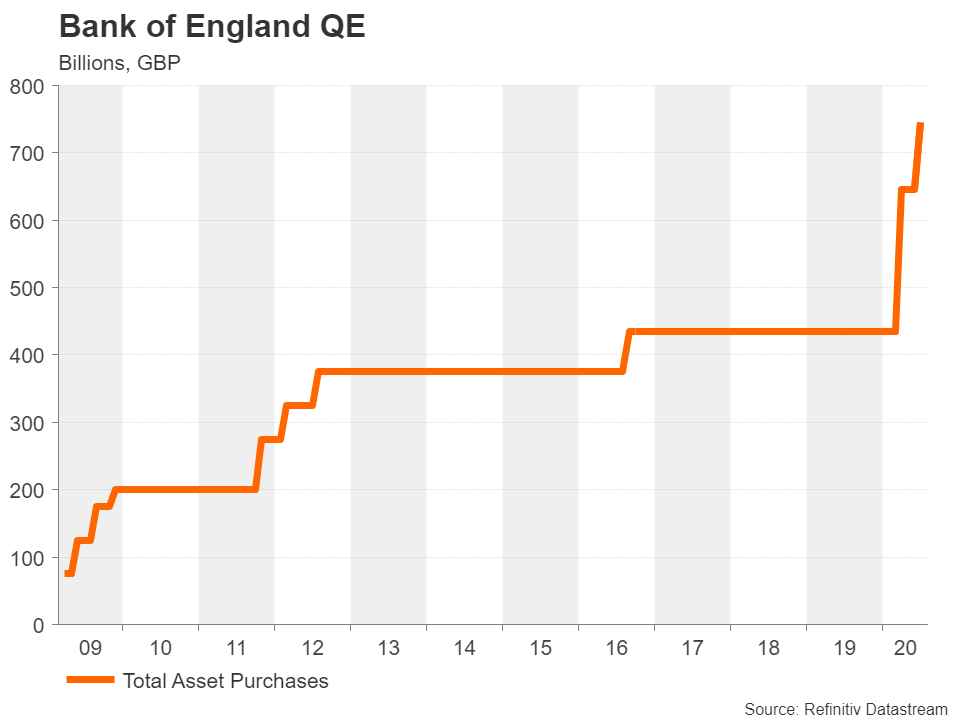 For the United Kingdom, the outlook is further clouded by Brexit. Although the economy is on track to post a strong rebound in the third quarter and may even outperform its peers given that it was slower to come out of lockdown in Q2 and therefore the boost from the business re-openings will be felt greater in the summer months, the fourth quarter may bring fresh chaos if there’s no Brexit deal by October.

Even if Britain and the European Union do manage to strike a post-Brexit trade agreement, the cost and disruption to businesses to conform to new rules when the transition period ends on December 31 could hamper the economy’s recovery efforts.

But a more pressing question for investors than additional QE is how close the BoE is to adopting negative interest rates. Back in May, Bailey made a sudden U-turn on the possibility of the Bank introducing negative rates in the UK, having dismissed the idea just a week earlier. According to the BoE, negative rates are “under active review” and could well become the next tool in fighting the pandemic.

No doubt Bailey will face a lot of questions from reporters on Thursday about where policymakers stand on the issue. Markets certainly seem to think it’s only a matter of time before the Bank Rate turns negative as interest rate futures imply such a move could happen by May 2021.

If Bailey hints that negative rates are merely something being looked at and there’s little chance that they would ever see the light of day, the pound is likely to extend its recent winning streak. Cable could next set its sights on the 123.6% Fibonacci extension of the March descent at $1.3623, with the $1.33 and $1.35 levels being potential resting points in the uptrend.

However, if the Bank isn’t quite as optimistic with its forecasts as is being anticipated and the Governor suggests negative rates are a real possibility, the pound could retreat below $1.30. A sharp selloff could push cable as low as the 50% Fibonacci of $1.2513, though the 50- and 200-day moving averages near $1.26 and $1.27, respectively, may attempt to halt the decline.